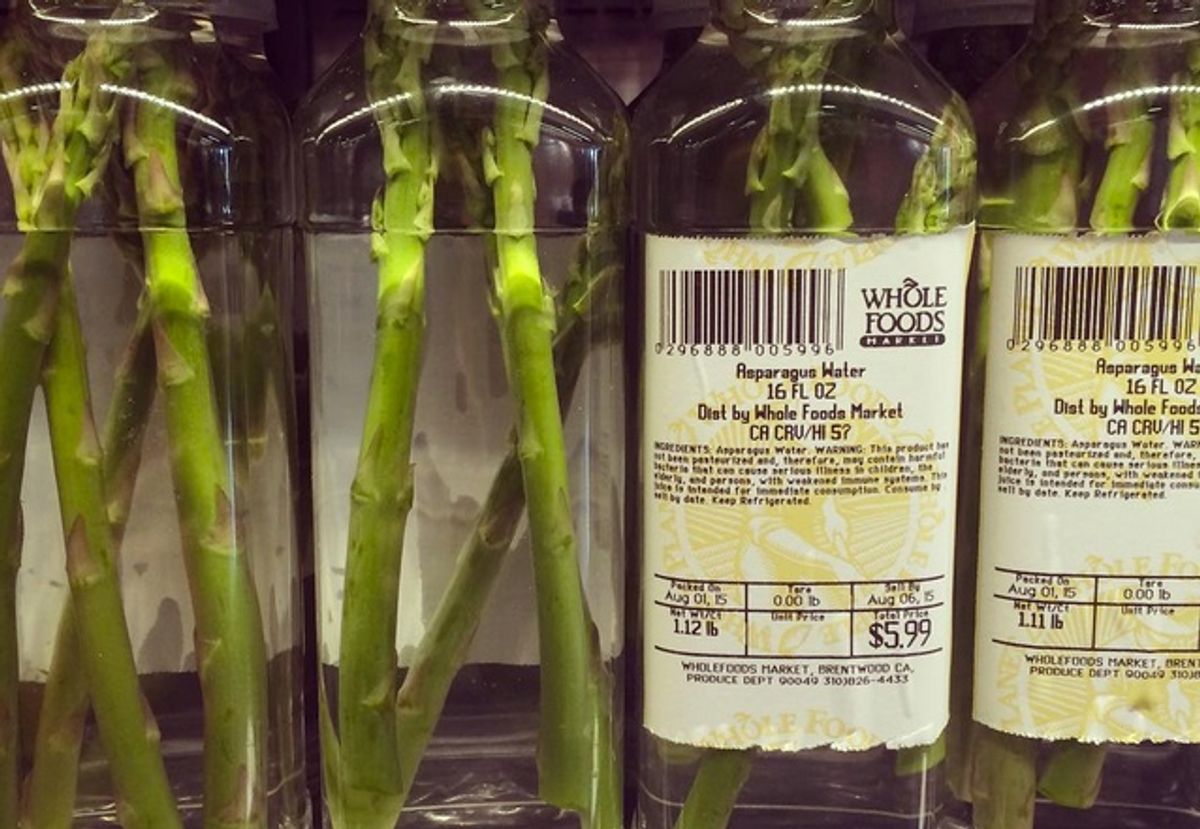 FACT CHECK:   Is a photograph of Whole Foods "Asparagus water" priced at $5.99 real?

Claim:   A photograph taken at a Whole Foods store depicts a product labeled "Asparagus water" that retails for $5.99.

Just read about asparagus water being sold in whole foods — and I have a hard time believing its true..

Origins:    The Whole Foods supermarket chain, which specializes in organic food (and was involved in a June 2015 pricing controversy), has long been jokingly referred to as "Whole Paycheck" by shoppers. Therefore, when a photograph of jars of "Asparagus water" offered for sale by the chain at $5.99 each were circulated on social media, many viewers were confused as to whether the picture was legitimate or a parody playing on the image of overhyped, expensive items offered by the high-end grocer.

The Asparagus water photograph seen here was taken at a Brentwood, California, Whole Foods outlet and shared by Instagram user Marielle Wakim (who later blogged about it) on 3 August 2015:

Somewhere in L.A., Whole Foods executives are laughing at all of us.

The multi-city food blog Eater set out to determine whether the photograph was legitimate and whether "Asparagus water" was (as the image suggested) simply three stalks of asparagus in a bottle of water retailing for $5.99. (That question was somewhat answered by the article's title, "Whole Foods' $6 Asparagus Water Is Just Water with Three Stalks of Asparagus in It.") In the Eater piece, they reported that Whole Foods had initially denied but later acknowledged the existence and availability of asparagus water:

The labels say "Whole Foods," and the date on the bottles is current. A call to the supermarket (these particular bottles are from the Whole Foods in Brentwood, Calif. though in the New York City area grocery delivery service Instacart, which is a partner of Whole Foods, lists "Asparagus Water") at first produced some bewilderment. The operator denied the product existed. Eventually she transferred the call to a gentleman in the produce department who did not want to give his name. He explained that the product was new, "We've had them on the shelf for the last few days." When asked how the item is made, he said, "It's water, and we sort of cut asparagus stalks down so they're shorter, and put them into the container." When Eater asked what it was for, there was a long pause before he said, "Well, it's ... to drink." He elaborated, "The nutrients from the asparagus do transfer into the water."

Whole Foods' Senior Media Relations Specialist Liz Burkhart sent a statement to Eater about the Asparagus water controversy, providing the perplexing explanation that the (clearly labeled) item was created incorrectly and was at no point available on Instacart (the service by which Eater had initially verified its existence):

We appreciate you bringing this to our attention. We looked into this right away and found that this item was being carried in just one of our stores in California. It was meant to be water with the essence of vegetables and/or mushrooms to be used as broth (similar to a bone broth), which are typically made over a long period of time soaking in water. The product was made incorrectly and has since been removed from the one store where it was carried. We read your story, and would love your help clarifying that this product isn't and never has been available for online ordering on Instacart and was only ever offered in one store.

Burkhart's claim about the product never having been available on Instacart was difficult to corroborate. On 5 August 2015, the site showed Asparagus water as "[n]ot currently available from this retailer." However, we looked at a version of the site cached by Google on 22 May 2015, and that version carried a listing for Asparagus water that stated it was "available for same-day delivery on Instacart" and "available from Whole Foods Market":

In any case, the photograph of Asparagus Water priced at $5.99 per bottle and offered at a Whole Foods in Brentwood, California, was real and accurate. Whether the items was intentionally prepared, labeled, or priced that way was unclear, and Whole Foods has since stated they will no longer vend that product.