Did a 'Hopi Indian Chief' Write a Lockdown-Era Message About 'Resistance'? 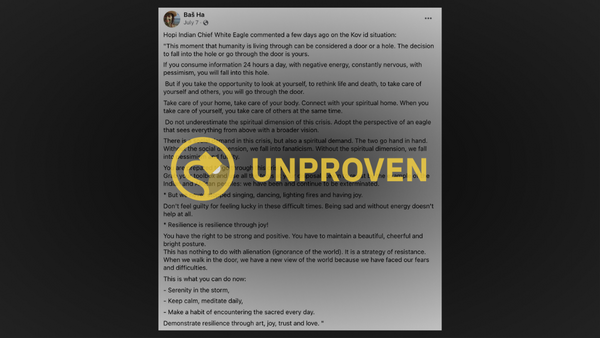 Claim:
A viral social media message from 2020 and 2021 was authored by a Hopi "chief" named "White Eagle."
Rating:

In October and November 2021, Snopes readers asked us to verify the authenticity and provenance of a message widely shared on social media throughout 2020 and 2021, and heavily promoted by those opposed to COVID-19 lockdowns. According to almost all the posts in question, the message originally came from a "Hopi Indian Chief" named "White Eagle."

The message was permeated with the language of New Age spirituality, and typically began by likening "the moment humanity is going through now" to a "portal" or a "hole," and encouraging readers to engage in "resistance through joy": Despite extensive research, we have not yet been able to find evidence to corroborate the claim that the message originated with a prominent Hopi named "White Eagle," or indeed of any other name.

Furthermore, good reasons exist to doubt that widespread attribution, and the earliest versions of the message that we found were published by a Brazilian "medium" who engages in pseudoscientific practices like "reincarnation psychotherapy" and proponents of a Brazilian religious movement — entirely different cultural contexts to the Hopi tribe in Arizona. For now, we are issuing a rating of "Unproven." If definitive evidence becomes available, we will update this fact check accordingly.

The message was posted and re-posted multiple times in 2020 and 2021, with occasional minor tweaks, but was almost always attributed to "White Eagle," who was typically described as a "Hopi Indian Chief."

In some cases, social media posts featured photographs of what appeared to be an elderly man, while others contained a picture of an elderly woman — two mutually exclusive claims as to the gender of "White Eagle," and a sign that that attribution might be dubious. In another prominent early version of the message, posted in French on March 28, 2020, the photograph used was actually taken in 1904, meaning it could not possibly show anyone alive in the age of online memes or COVID-19.

In June 2020, "Bird Clan Messenger" — a Canadian blog that espouses "indigenous wisdom" and alternative medicine, as well as opposing COVID-19 mitigation measures like lockdowns and vaccine passports — attributed the "portal and hole" message to Joseph White Eagle, whom the site described as "a Cree spiritual leader and teacher of traditional Native wisdom."

However, that blog post was later deleted, and Joseph White Eagle posted on Facebook in September 2021, explicitly denying he had authored the message, and adding: "Somebody first gave credit to a fictitious Hopi Chief White Eagle and when they found he does not exist they started giving me credit for this message."

On March 28, 2020, artist and new-age spiritualist Alex Grey included the message in an Instagram Live broadcast, describing it as "Channeled from White eagle in daime church / Message from Caboclo Águia Branca," and dating it to March 16, 2020. In this context, "Daime" likely refers to "Santo Daime," a religious movement which emerged from Brazil in the early 20th century and encompasses elements of various other religions, as well as using the psychedelic drink ayahuasca in rituals.

Grey's reference to "Caboclo Águia Branca" directed our research to an even earlier social media post containing the message — a March 19, 2020 Instagram post by Jefferson Orlando, a Brazilian "reincarnation pyschotherapist," which bore the headline "Mensagem do Caboclo Águia Branca" ("message from White Eagle.") When translated from Portuguese, the message was clearly the same one later attributed to a "Hopi Chief" named White Eagle, and shared widely in English on social media. It's not clear whether "White Eagle" is purported to be an actual, living person, a persona adopted by Orlando, or a long-deceased figure whose voice and message Orlando putatively "channeled." Snopes asked Orlando for clarification about the origins of the message, but we did not receive a response.

Also on March 19, 2020, a popular Facebook page which celebrates the Umbanda faith — like Santo Daime, Umbanda is a Brazilian religious movement that borrows from other religious practices — also posted the same message as Orlando, in Portuguese: It's not clear whether "Sabedoria de Umbanda" ("Umbanda Wisdom") or Orlando published their post first, and what the ultimate source of the message was.

We were unable to find any reference to the "portal and hole" message dated before March 19, and the "Hopi" attribution appears to have only emerged several days later. The earliest available instances of the message emerged from Brazilian religious movements, by way of new-age spirituality and pseudo-scientific paranormal psychology — vastly different cultural milieus from the traditions of the Hopi people. This strongly suggests the claim that a "Hopi Chief White Eagle" authored the message was unfounded.

However, we cannot definitively rule out the possibility that the March 19 Brazilian posts were, themselves, borrowed from Hopi culture in some way, with the chain of cross-germination no longer available due to social media posts having been deleted.