Did Ken Huber Ask 'What Has America Become' in a Letter to the Editor?

A letter to the editor purportedly written by Ken Huber from Tawas City, Michigan, was shared on Facebook. 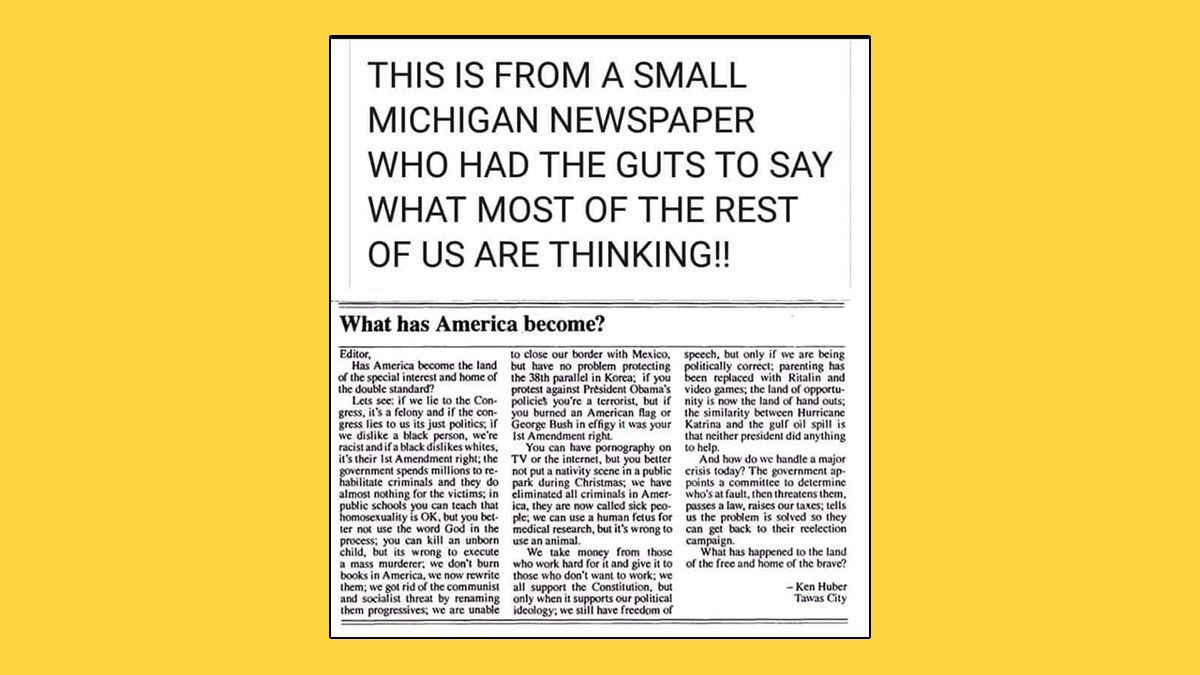 Claim:
A letter to the editor credited to Ken Huber from Tawas City asked: "What has America become?"
Rating:

The letter to the editor was real. However, it was first published in 2010. In 2021, a Facebook meme that displayed the letter without a date may have left some readers with the wrong impression that it was new.

In April 2021, a purported letter to the editor from a newspaper was shared on Facebook. The letter, titled "What has America become?," was credited to Ken Huber from Tawas City, Michigan. It appeared in a Facebook meme with the words: "This is from a small Michigan newspaper who had the guts to say what most of the rest of us are thinking!!" The letter as it appeared in a meme in April 2021.

This was a real letter to the editor. Readers who might have given it a quick glance on Facebook in 2021 may have left with the impression that it was new. However, it was first published in 2010.

Part of the letter included references to former U.S. Presidents Barack Obama and George W. Bush, with the former in the White House at the time of its original publishing.

We've received inquiries about the letter for a number of years. The originally printed name was Ken Huber in the Iosco County News-Herald. However, we've also seen variations online in which the name was changed to Ted Huber, Ken Huber, and Kwen Huber.

Tawas City, which was mentioned as Huber's place of residence, is located in Iosco County, Michigan. We also found "What has America become?" was published in newspapers in Louisiana as far back as July 7, 2010. All of the newspaper reprints included the name Ken Huber. The variations appeared to only appear on the internet.

The letter read as follows:

What has America become?

Has America become the land of special interest and home of the double standard?

Lets see: if we lie to the Congress, it's a felony and if the congress lies to us its just politics; if we dislike a black person, we're racist and if a black person dislikes whites, its their 1st Amendment right; the government spends millions to rehabilitate criminals and they do almost nothing for the victims; in public schools you can teach that homosexuality is OK, but you better not use the word God in the process; you can kill an unborn child, but it is wrong to execute a mass murderer; we don't burn books in America, we now rewrite them; we got rid of the communist and socialist threat by renaming them progressives; we are unable to close our border with Mexico, but have no problem protecting the 38th parallel in Korea; if you protest against President Obama's policies you're a terrorist, but if you burned an American flag or George Bush in effigy it was your 1st Amendment right.

You can have pornography on TV or the internet, but you better not put a nativity scene in a public park during Christmas; we have eliminated all criminals in America, they are now called sick people; we can use a human fetus for medical research, but it is wrong to use an animal.

We take money from those who work hard for it and give it to those who don't want to work; we all support the Constitution, but only when it supports our political ideology; we still have freedom of speech, but only if we are being politically correct; parenting has been replaced with Ritalin and video games; the land of opportunity is now the land of hand outs; the similarity between Hurricane Katrina and the gulf oil spill is that neither president did anything to help.

And how do we handle a major crisis today? The government appoints a committee to determine who's at fault, then threatens them, passes a law, raises our taxes; tells us the problem is solved so they can get back to their reelection campaign.

What has happened to the land of the free and home of the brave?

We don't know who this Ken Huber is, however, we can see this letter used a number of odd comparisons. It didn't provide any evidence to support its claims in a classic appeal to emotion. Readers may be reminded of the term "logical fallacy," which is best defined as "an error in reasoning" with a conclusion that does not follow the subject preceding it.

The dated letter has spawned a number of responses and a bit of discussion over the years. It was also reprinted on blogs as far back as July 2010.

In sum, it's true that a 2010 letter to the editor asking "What has America become?" was credited to Ken Huber.

On March 11, 2022, we changed the rating for this story from "Correct Attribution" to "Outdated." The reason for the rating change came after we examined the original rating and came to the conclusion that "Outdated" made more sense.