What Does Koko the Gorilla Know About Climate Change?

A PSA featuring a gorilla signing a warning to humans about climate change is essentially nothing more than a staged commercial. 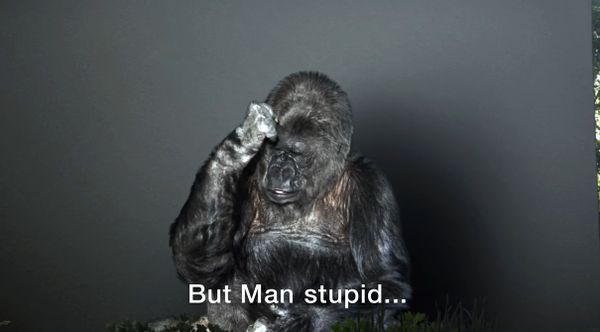 If you want an audience to take heed of what you have to say, sometimes the messenger who delivers it for you can be just as important as the message itself. Depending on the nature of your communiqué, you may find it has a much greater impact on your intended audience if it is conveyed a a sympathetic figure who can tug at people's heartstrings (e.g., a child, a Native American, a mother, a veteran) or a respected figure whom viewers perceive as knowledgeable about the subject at hand (e.g., a judge, a policeman, a college professor).

A messenger who brought both those qualities to the table was Koko the gorilla, a primate who purportedly understands approximately 2,000 words of the spoken human language and can communicate her thoughts to humans via her use of more than 1,000 signs of what 'Gorilla Sign Language' (a modified version of American Sign Language). In 2015 two non-profit organizations, the Gorilla Foundation (who oversee Koko's care and training), and NOE Conservation (who seek to safeguard biodiversity), teamed up to produce a Public Service Announcement (PSA) featuring Koko in conjunction with the United Nations Climate Change Conference (also known as the COP21 Climate Conference) held in Paris in December of that year:

That video captured Koko supposedly signing about the importance of our protecting and preserving nature, a message that (given the nature of the proceedings it was associated with) was interpreted as a plea to acknowledge the issue of climate change. The NOE said as much, declaring that the video captured "Koko reacting after she has been informed about what is at stake at COP21." And the press release issued with the video by the Gorilla Foundation asserted that Koko was indeed being "clear" about wanting to convey the notion that "Man is harming the Earth":

Because of her unique ability to communicate with humans in sign language, Koko is a natural ambassador for endangered species, and thus we agreed to co-produce a short video PSA (Public Service Announcement) contingent on Koko's willingness to participate.

Koko was clear about the main message: Man is harming the Earth and its many animal and plant species and needs to "hurry" and fix the problem.

We humans may disagree on the possibly deleterious effects our activities are having on our global environment, but how could we possibly ignore a poignant plea from a gorilla — a message delivered by a personification of Nature itself, who is not coincidentally regarded as sympathetic and knowledgeable regarding the subject at hand?

Some viewers took the video a little too literally, however, and were surprised at Koko's pithy and timely exhortation to heed the perils of global warming. But nothing about the video indicates that Koko can actually entertain, much less communicate to humans, thoughts about environmentalism.

For starters, as noted in a 2014 Slate, human-ape communication may be far more about anthropomorphization than actual linguistic expression, especially when it comes to the expressing ideas rather than communicating basic needs:

[C]onceding that the scientific jury is still out on whether gorillas are capable of sophisticated emotions doesn't make headlines, and admitting the ambiguity inherent in interpreting a gorilla's sign language doesn't bring in millions of dollars in donations. So we get a story about Koko mourning Robin Williams: a nice, straightforward tale that warms the heart but leaves scientists and skeptics wondering how a gorilla's emotions can be deduced so easily.

Koko is perhaps the most famous product of an ambitious field of research, one that sought from the outset to examine whether apes and humans could communicate. In dozens of studies, scientists raised apes with humans and attempted to teach them language. Dedicated researchers brought apes like Koko into their homes or turned their labs into home-like environments where people and apes could play together and try, often awkwardly, to understand each other. The researchers made these apes the center of their lives.

But the research didn't deliver on its promise. No new studies have been launched in years, and the old ones are fizzling out. A behind-the-scenes look at what remains of this research today reveals a surprisingly dramatic world of lawsuits, mass resignations, and dysfunctional relationships between humans and apes.

Unlike us, it seems that apes don't care to chitchat. Psychologist Susan Goldin-Meadow points out that studies with Kanzi (a bonobo) show that only 4 percent of his signs are commentary, meaning the other 96 percent are all functional signs, asking for food or toys. Similar skepticism about Koko emerged in the 1980s, when Herb Terrace published a fairly scathing critique of ape language research. Among other criticisms, Terrace asserted that Koko's signs were not spontaneous but instead elicited by [her handler's] asking her questions.

In any case, Koko's supposed message about climate change and biodiversity is completely lacking in context: the viewer has no idea what any offscreen handlers might have said or done to elicit the signing she produces, or whether the video is anything more than a collection of disjoint, completely unrelated signs strung together into a narrative fashioned by humans rather than a gorilla. Even if we were to assume the (highly unlikely) possibility that Koko's signing was completely spontaneous and unguided, her "message" is highly ambiguous and non-specific — outside of humans' suggesting a framework for us to employ in interpreting it:

For all we know, this discourse might have been prompted by Koko's having just witnessed a clumsy gardener on a power mower carelessly amputating a crop of blooming roses in a nearby flowerbed, and she's expressing that she wants someone to repair the damage by reattaching the severed buds to their stems.

Even the Gorilla Foundation admitted that Koko was "briefed" on the subject at hand and provided with a "script" for the video, which was "edited from a number of separate takes":

Turns out Koko was very interested in the subject [of preserving biodiversity], which we briefed her on via a recent issue of National Geographic titled "Cool It!"

We also presented her with a script drafted by NOE (as any celebrity ambassador asked to do a PSA would expect) and allowed her to improvise during s series of brief daily video discussion sessions, in which Koko also had to learn a few new signs, such as "Protect" and "Nature."

The resulting PSA was edited from a number of separate takes, for brevity and continuity.

Barbara King, a biological anthropologist at the College of William and Mary who writes about human evolution, primate behavior, and the cognition and emotion of animals, commented on the the Koko PSA thusly for NPR:

[R]eminds me of earlier attempts by the Gorilla Foundation to showcase Koko's ability to understand things that there's little chance she could understand, at least in the ways suggested.

Anthropomorphism — the projection of so-called human qualities onto other animals — is not inevitably wrong. Other animals may share with us many ways of thinking and feeling, and recognizing that fact is often appropriate.

But the anthropomorphism in this video is not appropriate. Not even linguistically inclined apes comprehend anything close to the dynamic interplay between humans and nature that underlies anthropogenic climate change.

King also quoted Sherman Wilcox, professor of linguistics at the University of New Mexico, as saying in reaction to this video:

This is obviously a doctored video composed of highly edited clips of single signs pieced together to make it look like Koko is actually saying something, when she's not. It is disconcerting on so many levels. I fear it diminishes the seriousness of the climate change issue. Climate change deniers already feel like scientists are lying to the public. We don't need to give them fake videos.

A Huffington Post article on the topic similarly quoted skeptics from the fields of linguistics and primate research:

But can a gorilla really grasp abstract concepts like climate change and biodiversity?

"Of course not," Herbert Terrace, director of Columbia University's Primate Cognition Lab, told The Huffington Post. Terrace criticized the video as "highly misleading" because "we don't know what Koko's trainer was signing to her before she uttered the various signs ... attributed to her."

"Koko's human-coached message goes well beyond anything that a gorilla understands or cares about, such as human global impact," de Waal told HuffPost. He added that "stunts" like this one "have given the ape-language field a bad name, whereas there is so much more to discover if we just study what cognitively advanced animals can do of their own accord."

"The problem comes in when we take an ape's accomplishments and then ... insist ... on putting her forward as a wise old woman, and she's not," [Barbara] King said.

The Koko climate change PSA is a novel and compelling way of focusing viewer attention on a political message, but it's basically just a staged commercial, not an expression of sagacity about Nature issued by a non-human creature.