Was One of These Webs Spun by an LSD-Tripping Spider?

Like humans, the cognitive abilities of spiders appear to be impaired by drugs. 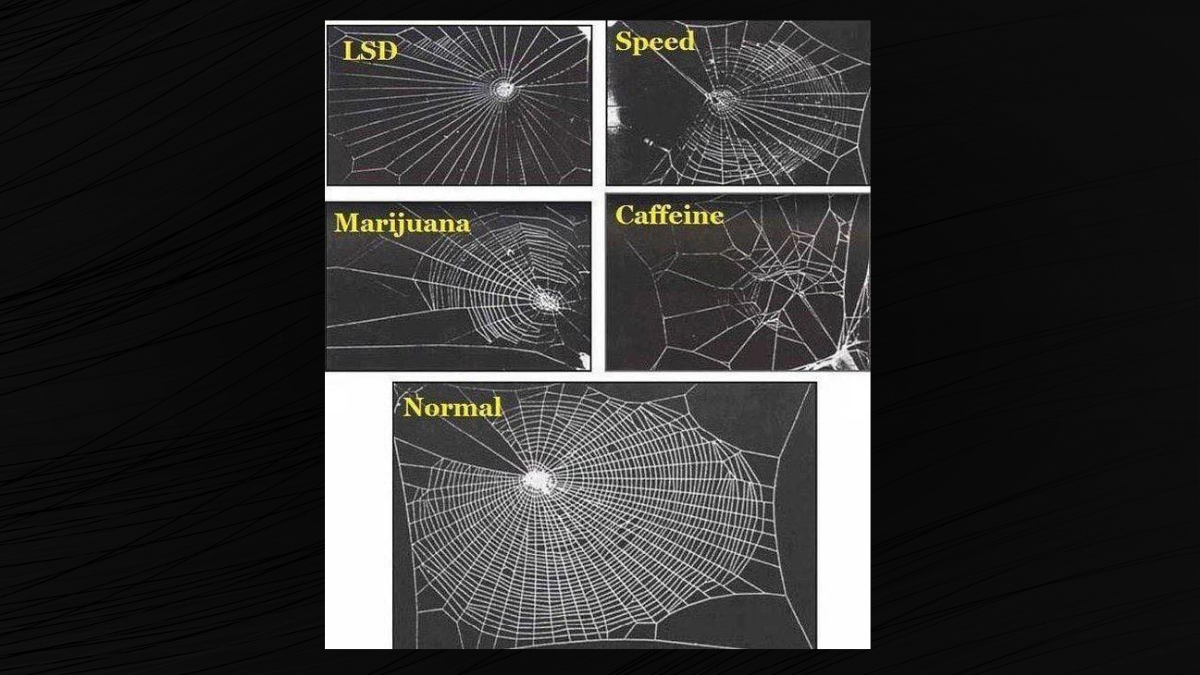 Claim:
In 1995, NASA funded research that tested the various toxicity levels of various drugs — including marijuana, caffeine, and sedatives — to determine what effects they have on spiders spinning webs.
Rating:

While it is true that various research institutions and scientists have funded and tested the effects of drugs and substances on spiders’ ability to weave webs, social media posts have interchanged photographs used in various studies.

Orb-weaving spiders are known for their meticulous ability to create suspended, intricate wheel-shaped webs characterized by nearly parallel grids that have inspired Halloween decorations for decades. How well a web is constructed can determine the likelihood that its weaver will survive.

And decades of scientific research have revealed that when a spider is under the influence of drugs, its web can take on a variety of uncharacteristic shapes and patterns.

A reverse image search revealed that the photographs featured in the tweet in question have been shared to the internet more than 100 times, including a viral Reddit post posted in May 2021.

Though the above images are authentic, they were not all included as part of a 1995 NASA experiment (more on what exactly NASA funded later). In the decades following studies surrounding the web-weaving skills of hallucinating spiders, social media users have mixed and matched photographs taken during various research projects and, in some cases, have erroneously described the details of such work.

Since at least the 1950s, scientists have conducted experiments exploring the effects of various drugs on spiders, the first of which resulted in a 1954 piece titled “Spider Webs and Drugs” published in Scientific American. Among the first of those researchers was Peter Witt, a Swiss pharmacologist who studied how drugs impact the cognitive effects of drugs on the geometry of orb spider webs.

In particular, the photograph depicting the web of an acid-tripping spider is authentic, but it was not published as part of the 1995 NASA research nor was it connected with Witt, who died at the age of 80 three years later. The photograph was published in a 1957 article published in the American fashion journal Gravure Magazine with an accompanying caption that read, “Web built after administration of d-lysergic acid diethylamide (lsd).”

To get a spider to take acid, a medical student at the time provided an “ingenious” solution.

“The drug was mixed in a sugar solution which was then injected into a small fly. A tuning fork was used and the vibrations set up in the signal thread were the clue to the bait. Apparently the mixture was delicious because there was no problem about getting him [the spider] to take the bait,” read the Gravure Magazine article.

The 1957 research noted that spiders on LSD seemed “unaware of outside influences and concentrated on the job.” An interesting parallel, the writers noted, when compared to a person who has ingested a hallucinogen and “has a very rich inner life and seems out of contact with reality.”

“With depressants they ‘forgot’ to finish what they had started and the result was a very ineffective food-gathering device. Humans react in much the same way,” read the article.

Then again, the researchers also injected spiders with the blood serum taken from catatonic people diagnosed with schizophrenia which they said caused the spiders to “withdrew from all activity” and exhibited “only feeble attempts at spinning or none at all.”

Thankfully, science is an ever-evolving study.

Witt, who was also a mental health researcher and consultant to NASA, said in 1973 that the testing was done in part to determine how spiders spinning inside the orbit of a space station would be impacted by zero gravity and the stress of space travel – study the effects of drugs on mental health, plus environment, on the web building of spiders and how the changes relate to human behavior patterns

And in the decades that followed, NASA also took a keen interest in adding onto Witt’s research. On April 1, 1994, NASA researchers David Noever, Raymond Cronise and Rachna Relwani published a four-paragraph description of an experiment called “Using Spider-Web Patterns To Determine Toxicity” in a 124-page issue of NASA Tech Briefs. Researchers describe having similarly used spiders as a means to test toxic chemicals at a less costlier alternative, and to “avert potential conflicts with the recent animal-rights legislation issues.” But the 1995 study, which has been archived here, only published a graphic that depicted the effects of marijuana, Benzedrine, caffeine, and chloral hydrate — not LSD.

Spiders recorded in the NASA study were either left sober or were given an unspecified dose of marijuana, Benzedrine, caffeine, or chloral hydrate. However, it did not appear that the arachnids had been given LSD or speed, as the popular meme suggested.

“The changes in webs reflect the degree of toxicity of a substance. The more the chemical, the more deformed a web in comparison with a normal web,” wrote NASA.

Each image was digitized and processed by an image-data analysis program that computed measures of cellular structures of each web, including the area, perimeter, and radii of its cells.

“It appears that one of the most telling measures of toxicity is a decrease in comparison with a normal web of the numbers of completed sides in the cell: the greater the toxicity, the more sides the spider fails to complete,” wrote the study authors.

“Did NASA Give Spiders Drugs to See How They Would Affect Web-Spinning?” Poynter, 13 Dec. 2019, https://www.poynter.org/tfcn/2019/did-nasa-give-spiders-drugs-to-see-how-they-would-affect-web-spinning/.

Narendra_17. “In 1995 a Group of NASA Scientists Studied the Effects of Various Drugs on Spiders, Specifically on the Way They Weave Their Webs.” R/Interestingasfuck, 19 Apr. 2021, www.reddit.com/r/interestingasfuck/comments/mtrjnk/in_1995_a_group_of_nasa_scientists_studied_the/.

---. “In 1995 a Group of NASA Scientists Studied the Effects of Various Drugs on Spiders, Specifically on the Way They Weave Their Webs.” R/Interestingasfuck, 19 Apr. 2021, www.reddit.com/r/interestingasfuck/comments/mtrjnk/in_1995_a_group_of_nasa_scientists_studied_the/.