Was a Weapon Advertised For Its Ability to Fit in a Backpack?

A photograph of a gun displayed in a clear plastic backpack is real. 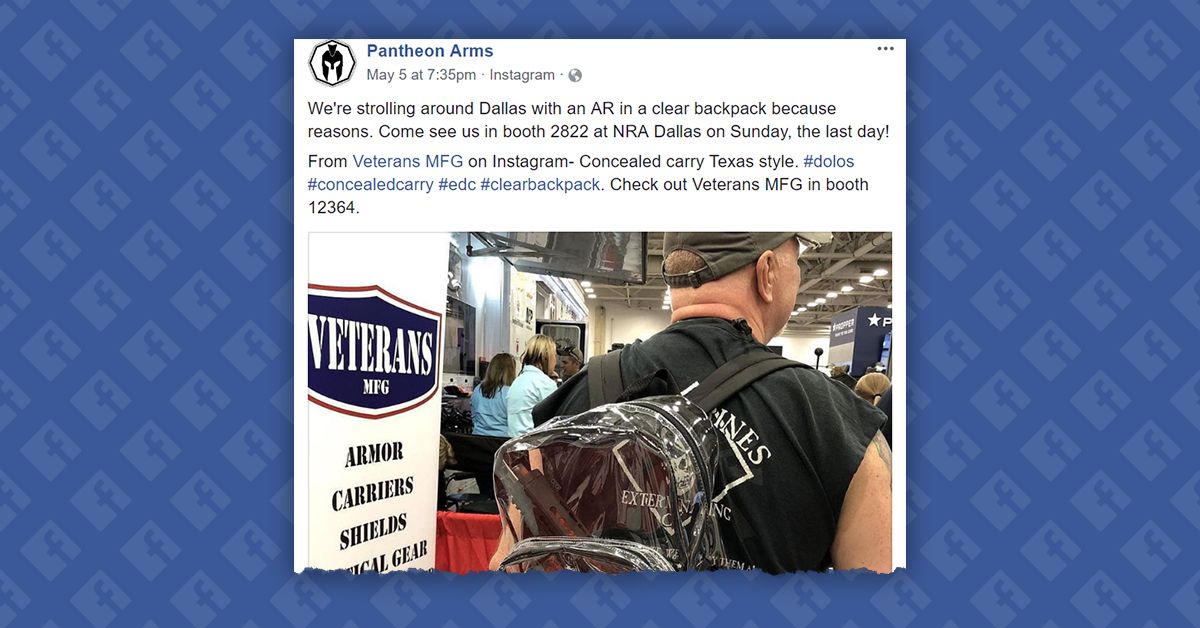 Claim:
An arms dealer advertised a weapon for its ability to fit into a small backpack.
Rating:

In the months after a February 2018 mass shooting in south Florida that left seventeen people dead, survivors at Marjory Stoneman Douglas High School in Parkland, Florida were required to start using clear backpacks at the school.

The attempt to deter students from bringing weapons to school was criticized for a number of reasons, including the argument that clear backpacks are pointless since a weapon the size of an AR-15 could never fit inside one anyway: So when an image started making its way around on social media in May 2018 that purportedly showed a display at an National Rifle Association convention advertising an weapon that can fit inside those backpacks, some were taken aback by the visual: Snuck into the NRA convention. This is an assault weapon advertised specifically for its ability to fit inside a child’s backpack.

This is a genuine photograph taken at the 2018 NRA convention in Dallas, Texas.

This display is showcasing the Dolos — a rapid deployment and takedown system for the AR-15 — from Pantheon Arms, which enables the barrel of the weapon to be detached so that it can easily fit into laptop bags or backpacks: Pantheon Arms typically uses opaque bags to advertise the Dolos, but they brought at least one transparent bag to the NRA convention to give potential buyers a better look at the weapon system and how easily it fits into a small backpack. The company also shared several photographs and videos on their social media accounts: It also filmed a stunt featuring a man walking through an anti-gun rally outside the NRA convention. The man (as well as his weapon) go largely unnoticed by the crowd:

Regrann from @vikingarmament - “I told him it’s a bad ass gun in his backpack” the only person to notice!! #stillwaiting for the #assaultrifle to jump up and assault someone!! #clearbackpack #safteyorange #ar15 #edc #dolos #momsdemandaction #guncontrol #? #viking #vikings #vikingarmament @pantheon_arms - #regrann

Although a clear backpack was used to advertise the system during the NRA convention, Pantheon Arms does not explicitly sell the weapons for their ability to fit into children's bags.

Pantheon Arms told us via e-mail:

We at Pantheon Arms were grateful and honored to exhibit our unique safety products at the 2018 NRA Annual Meeting.  We fully support any and all lawful use of our products.

Pantheon Arms stands with all Americans in defense of our inalienable 2nd Amendment rights.