Did Wayne LaPierre Say There Should Be 'No Guns in Schools, Period'?

A quote attributed to Wayne LaPierre of the NRA was abbreviated in a slightly misleading fashion. 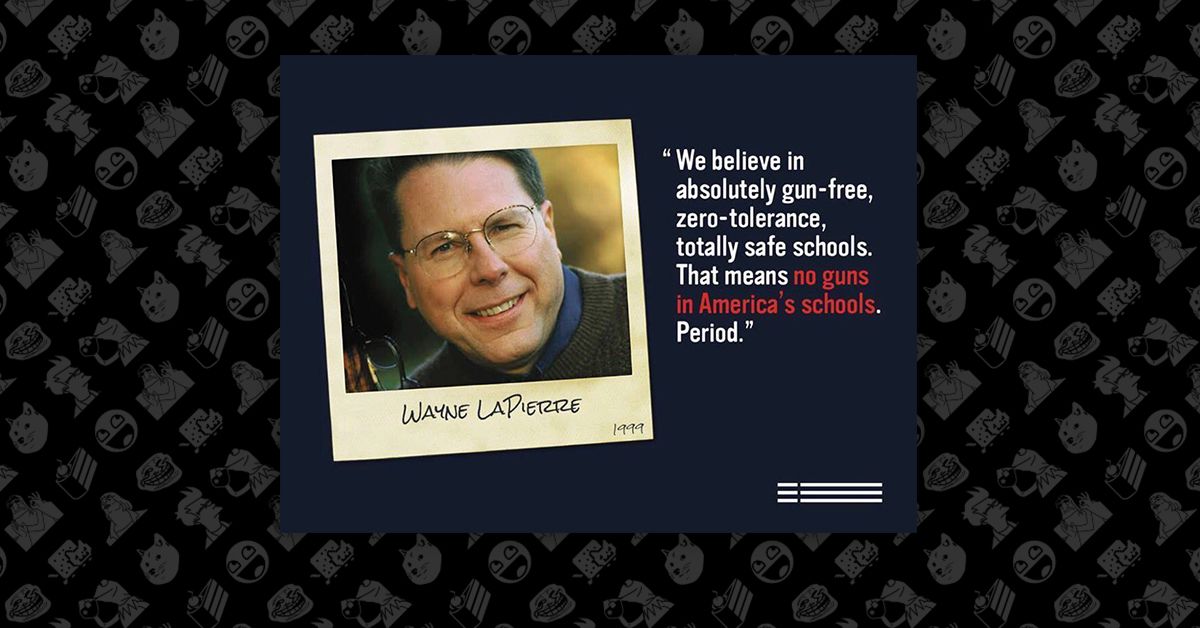 Claim:
In 1999, Wayne LaPierre of the NRA said there should be no guns in American schools "period."
Rating:

On 22 February 2018, LaPierre spoke at the Conservative Political Action Conference (CPAC), delivering remarks in which he posited that "effective, trained, armed security" at schools could be a strong preventive measure against school shootings:

LaPierre broached the topic at around the seven-minute mark of his speech, at one point saying:

Can we protect so much with armed security, while we drop our kids off at school, that are so-called gun-free zones, that are wide open targets for any crazy madman bent on evil to come there first?

... In every community, PTAs, teachers' unions, local law enforcement, moms and dads — they all must come together to implement the very best strategy to harden their schools, including effective, trained, armed security that will absolutely protect every innocent child in this country. That has to happen now. Evil walks among us, and God help us if we do not harden our schools and protect our kids.

In response, a quote attributed to LaPierre in 1999 spread on social media, suggesting that his position on guns in schools had shifted from "zero tolerance" to the NRA's "School Shield" program (a federally funded but nebulous initiative to arm school staff):

Wayne LaPierre in 1999 — before gun manufactures started selling more guns to fewer people and decided the only way to maintain their profit margin after their demographic died off was to force guns onto the next generation. #CPAC #CPAC2018 pic.twitter.com/OYlj3Hp0yT

The meme suggests that prior to the "School Shield" initiative, LaPierre framed the NRA's position on guns in schools differently: "We believe in absolutely gun-free, zero-tolerance, totally safe schools. That means no guns in America’s schools. Period."

The quoted material is a bit misleading, however. It is taken from a speech given by LaPierre at CPAC in 1999, just after the Columbine massacre. What LaPierre said, in its proper context, was:

We believe in absolutely gun-free, zero-tolerance, totally safe schools. That means no guns in America’s schools. Period. With the rare exception of law enforcement officers or trained security personnel. We believe America's schools should be as safe as America's airports. You can't talk about. Much less take guns on the airplanes. Such behavior in our schools should be prosecuted. Just as certainly as such behavior in our airports is prosecuted.

Without the commentary immediately following LaPierre's explanation of the NRA's stance on guns in schools, the excerpt's meaning was not clear. Following the Columbine massacre, LaPierre said that lax consequences for guns in schools, rather than adhering to a "zero tolerance" policy, was responsible at least in part for a massacre that was at that time a shockingly unusual occurrence. In 2018, the NRA more forcefully advocated for armed school security, but the statement in full from 1999 called for "trained security personnel" as among those who ought to be armed in schools.