Was This 9-pound Goldfish Found in a South Carolina Lake?

Anyone missing their goldfish? 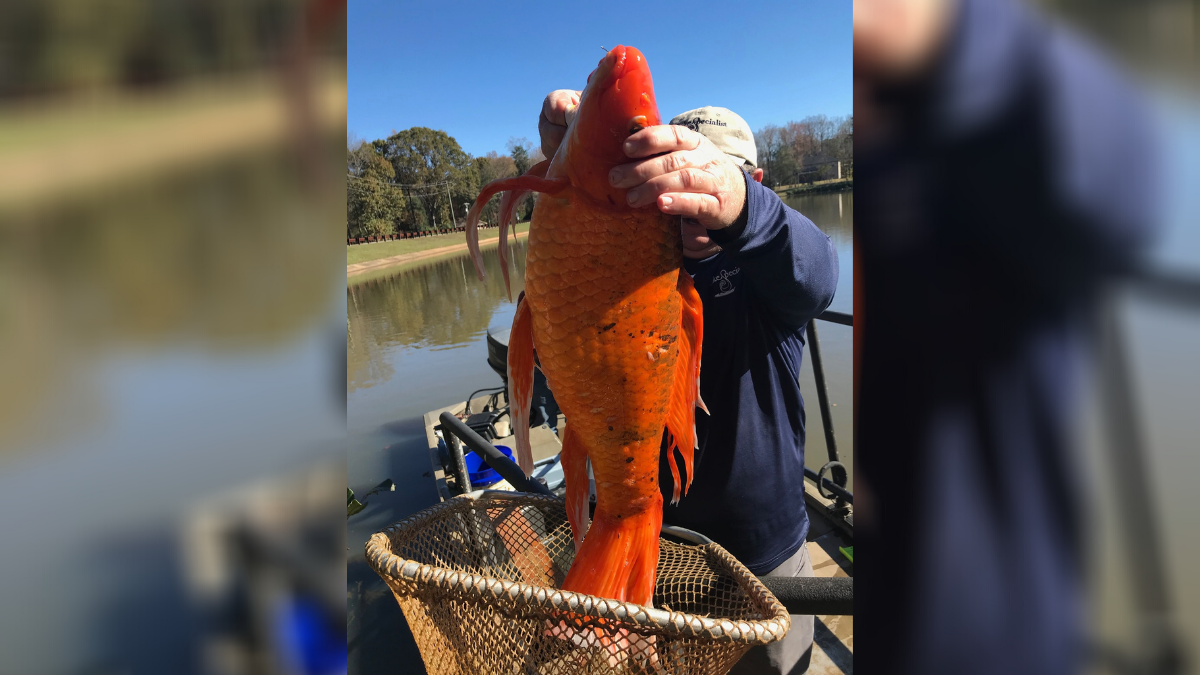 Claim:
A 9-pound “goldfish” was caught in a South Carolina lake during a routine electrofishing survey.
Rating:

Officials conducting a routine fish population survey in December 2020 wound up with quite the unexpected catch when they discovered a 9-pound “goldfish” in a South Carolina lake.

A photo of the giant goldfish was shared to Facebook and Instagram on Dec. 7, 2020, by Greenville Rec, which oversees the park.

“Anyone missing their goldfish?” joked Greenville Rec on social media. “This 9lb goldfish was found in Oak Grove Lake during some work including electrofishing, a method of measuring the health of the fish population.”

Ty Houck with the Greenville County Parks told NBC that the fish was found swimming on Nov. 16 in the 18-acre lake Oak Grove Lake in Greenville, South Carolina. A fisheries management plan was implemented in 2014 and as of June 2015, the fish population was deemed stable enough to open the lake for fishing on two days a week. The lake is intentionally stocked with bass, bream, and catfish — but the “goldfish” appeared to be an anomaly.

Though county officials claimed that the fish was a goldfish, some social media users pointed out that it was in fact a species of koi.

Both koi, the scientific name Cyprinus carpio, and goldfish, Carassius auratus, are domesticated forms of carp from the same family, Cyprinidae. The Smithsonian National Zoo noted that koi have been domesticated for their ornamental features for centuries in China and Japan, and are bred in dozens of different colors. But despite the urban legend, Japanese koi exporter Koi Acres said that a koi will not grow to the relative size of its pond or aquarium — the bigger the pond the bigger the fish. Rather, koi have a genetically predetermined size, like most animals, and will grow according to their environmental factors and health.

It’s not abnormal for koi to grow to pretty massive sizes. Koi can weigh up to 35 pounds and reach a length of 3 feet — and with larger sizes comes greater age. Koi have an average lifespan of 40 years, but the oldest known koi lived to be nearly 230 years old. (Researchers were able to determine its age by counting growth rings on the fish’s scales.) Goldfish, by comparison, typically vary in length from 4 to 16 inches and weigh up to a half-pound, according to National Geographic. That being said, the world's longest goldfish measured in at a whopping 18.7 inches from snout to tail-fin.

As for the South Carolina giant, surveyors reported that it was released without issue.

“Currently unnamed goldfish is obviously very happy and healthy at Oak Grove Lake so we just said hello and put him back,” wrote the rec department in an Instagram comment.