Was a Cartoonist Fired for an Anti-Trump Drawing?

Rob Rogers was let go after his newspaper rejected a number of cartoons, but not all of them had to do with President Donald Trump. 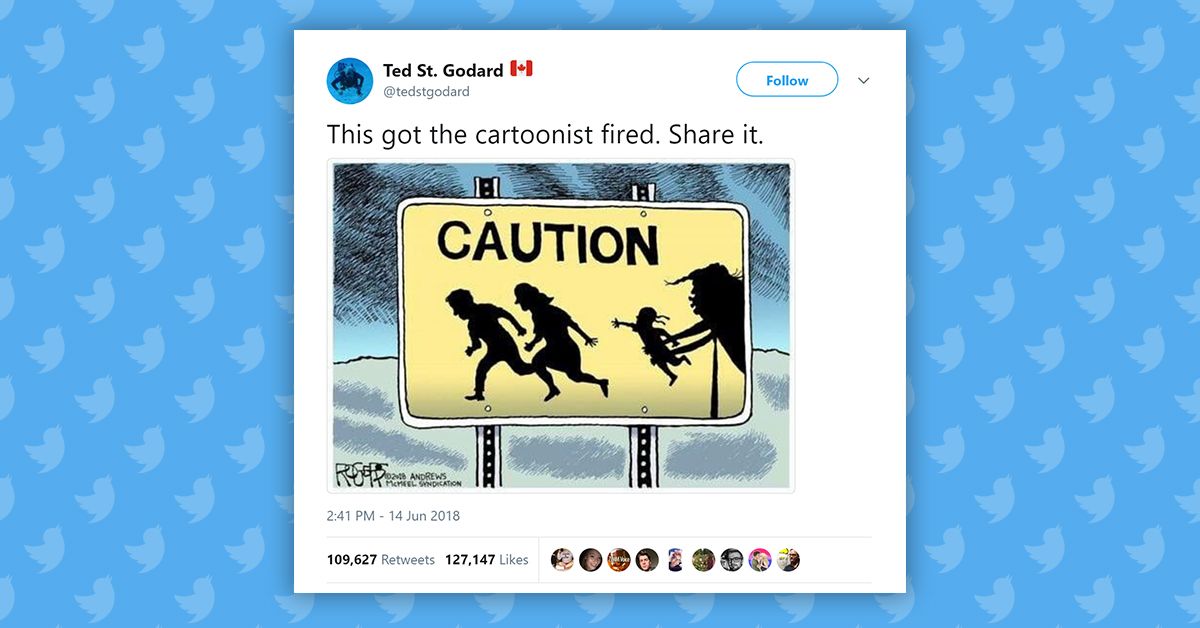 Claim:
Rob Rogers was fired by his newspaper after creating a cartoon which featured President Donald Trump snatching a child immigrant.
Rating:

Rob Rogers was fired by the 'Pittsburgh Post-Gazette' after the newspaper rejected a number of cartoons critical of Donald Trump's presidential policies.

Rogers' firing wasn't based on one single cartoon.

In June 2018, longtime Pittsburgh Post-Gazette cartoonist Rob Rogers was fired after a number of his drawings were rejected by the paper. Shortly after the news broke, a tweet purportedly showing the cartoon that proved to be the final straw in Rogers' relationship with the paper went viral: The cartoon was created by Rob Rogers shortly before he lost his position at the Pittsburgh Post-Gazette, but his firing was not based solely on this image but one of several anti-Trump cartoons that was rejected by the paper shortly before he was let go.

Rogers' cartoons have regularly appeared in the newspaper since he was first hired in 1993. In 2018, however, he noticed that more of his cartoons were being killed after a new editorial director joined the paper:

For the past week, there’s been a feature noticeably absent from the editorial pages of the Pittsburgh Post Gazette — the political cartoons of award-winning cartoonist Rob Rogers.

Rogers, who has drawn cartoons for the Post-Gazette since 1993, has seen six cartoons killed in a row by Keith Burris, who took over as the newspaper’s editorial director in March when the paper’s editorial board merged with its sister newspaper, the Toledo Blade. The cartoons included criticism of President Trump and of the NFL’s decision to prohibit players from protesting racial injustice during the national anthem.

Several of the drawings the paper rejected were critical of the president and his policies, but others dealt with issues not specifically tied to the president. For instance, Rogers' cartoon mocking Roseanne Barr and her "Ambien" excuse for making racist remarks was also rejected. Rogers posted that cartoon, as well as many of his other spiked drawings, to his Twitter page:

As Rogers' work was repeatedly rejected by the paper, he announced on 6 June 2018 that he was taking a vacation as the editorial issues with his paper were resolved:

I can't get into specifics here, but I felt that it was best under the circumstances to take some vacation days until issues with the Post-Gazette are resolved.

I can't thank you enough for your support.

But Rogers never returned to his position. On 14 June 2018, he announced that he had been fired from his job:

Sad to report this update: Today, after 25 years as the editorial cartoonist for the Pittsburgh Post-Gazette, I was fired.

The following day he published an op-ed in the New York Times, saying that the political slant of his cartoons, which did not shy away from criticizing the Trump administration and its various policies, played a large role in his termination:

After 25 years as the editorial cartoonist for The Pittsburgh Post-Gazette, I was fired on Thursday.

I should’ve seen it coming. When I had lunch with my new boss a few months ago, he informed me that the paper’s publisher believed that the editorial cartoonist was akin to an editorial writer, and that his views should reflect the philosophy of the newspaper.

That was a new one to me.

I was trained in a tradition in which editorial cartoonists are the live wires of a publication — as one former colleague put it, the “constant irritant.” Our job is to provoke readers in a way words alone can’t. Cartoonists are not illustrators for a publisher’s politics.

Things really changed for me in March, when management decided that my cartoons about the president were “too angry” and said I was “obsessed with Trump.” This about a president who has declared the free press one of the greatest threats to our country.

Not every idea I have works. Every year, a few of my cartoons get killed. But suddenly, in a three-month period, 19 cartoons or proposals were rejected. Six were spiked in a single week — one after it was already placed on the page, an image depicting a Klansman in a doctor’s office asking: “Could it be the Ambien?”

After so many years of punch lines and caricatures, skewering mayors and mullahs, the new regime at The Pittsburgh Post-Gazette decided that The Donald trumped satire when it came to its editorial pages.

Editorial director Keith Burris said that Rogers was fired because he was unwilling to "collaborate" on his cartoons:

“We tried hard to find a middle way, an accommodation to keep him at the paper,” said Mr. Burris.

He said he did not “suppress” Mr. Rogers’ cartoons but that Mr. Rogers was unwilling to “collaborate” with him about his work and ideas.

“We never said he should do no more Trump cartoons or do pro-Trump cartoons,” said Mr. Burris. “For an in-house staff cartoonist, editing is part of it. Rob’s view was, ‘Take it or leave it.’”

John Block — publisher of the Pittsburgh Post-Gazette — was more blunt about the decision, saying that Rogers "hasn't been funny in a long time":

The publisher of a Pittsburgh newspaper on Saturday defended the controversial firing of its editorial cartoonist, saying he “hasn’t been funny in a long time.”

“He’s just become too angry for his health or for his own good,” John Block, the publisher and editor-in-chief of the Pittsburgh Post-Gazette, told POLITICO in his first interview since the firing earlier this week. “He’s obsessed with Trump.”