Was a Woman Killed by a Frozen Shaft of Urine?

An image purportedly showing a woman who was pierced by a urine icicle originated on a 1990s-era British television show. 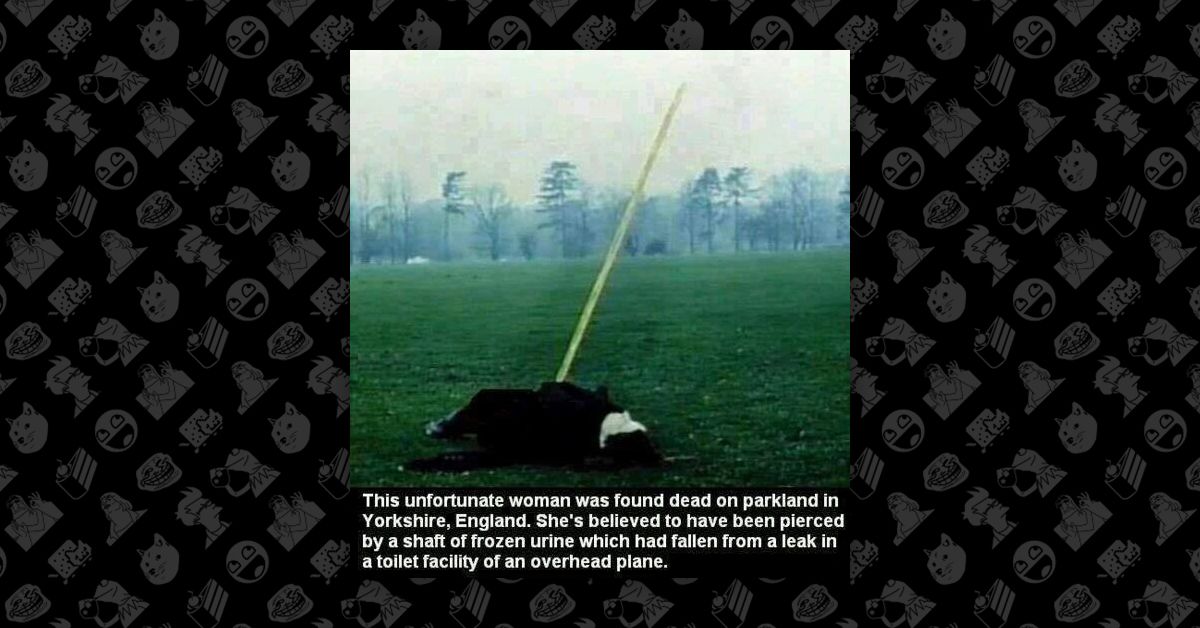 Claim:
A photograph shows a woman who was killed by a frozen shaft of urine that fell from a plane.
Rating:

In October 2017, an image purportedly showing a woman who was killed by a frozen shaft of urine that dropped from a passing airplane in England perplexed unsuspecting readers: This unfortunate woman was found dead on parkland in Yorkshire, England. She's believed to have been pierced by a shaft of frozen urine which had fallen from a leak in a toilet facility of an overhead plane.

This is actually a screenshot from a British news parody show called "The Day Today", which aired on BBC2 in 1994. The image appears shortly before a "chopper of doom" segment (which featured a helicopter piloted by a sheepdog) during the show's first episode, and it can be glimpsed at around the one-minute mark of the following clip:

The description, which we have transcribed below, bears a striking resemblance to the language on the meme: "Mrs. Handy Hell captured these snaps while out walking her brother on Wandsworth common. The unnamed woman had been pierced by a shaft of frozen urine which had fallen from the toilet facility of an overhead plane."

Ice falling from airplanes and striking people or buildings is not unheard of, and Heathrow Airport even has a page about the possibility on its official website. Despite that, there is no record of anyone ever being impaled by a gigantic urine icicle.