Muslim Refugees threatened to slaughter their hosts at Hope Farms in South Africa.

A group of refugees threatened to attack their hosts at Hope Farms.

The attackers were all Muslim migrants.

On 27 December 2015, the disreputable web site Mad World News published a sensational article about an incident at Hope Farm in South Africa.  The story centered around a South African couple, who had taken in 143 people following a wave of xenophobic attacks which swept the country in April 2015.

A white bleeding-heart leftist couple made headlines when they generously opened their home to a group of Muslim refugees allegedly fleeing devout Muslim militants. However, it didn’t take long for their liberal policies to backfire in a racist and ironic way — and it’s exactly the poetic justice we’ve been warning about all along.

In July, the headline read “Meet the angels who opened their hearts and home to 143 lost strangers,” and the left was drooling over the couple who followed their socialist values to the letter. Andrew and Rae Wartnaby opened up their 50-acre farmland to over 100 Muslim refugees who were reportedly displaced during “xenophobic attacks,” according to News 24.

After escaping Islamic brutality in the Central African Republic, the Muslim migrants traveled to South Africa, where they were again set upon by South African natives in black-on-black attacks. So, the good-natured yet naive white couple welcomed the refugee families to their land, which included Obama’s favored “widows and orphans.”

However, after only a few months of graciously allowing the Muslim migrants to live for free on their property, the loving couple soon found that they would actually be the refugees. The Wartnabys were threatened with slaughter by the same people they were helping escape brutality.

While Mad World News repeatedly states that the incident involved “Muslim refugees,” less sensationalized reports from local sources such as News 24  and eNCA made no mention of the group’s religions, referring to them instead as “foreign nationals” — among the many who had initially fled other parts of Africa because of political persecution and extreme poverty.

As the people staying at Hope Farm came from a wide variety of countries and backgrounds, it is unclear how Mad World News concluded that they were all Muslim.  Nor were they all from the Central African Republic, as the article reported.  According to farm owner Andrew Wartnaby’s personal blog, their guests originally came from Burundi and the Democratic Republic of Congo, and all were legally in the country as refugees or asylum seekers.

The Mad World News article also cherry-picked and exaggerated facts in order to chastise this “bleeding heart liberal” couple for taking in refugees. For instance, while it’s true that Andrew and Rae Wartnaby were threatened by the refugees, the threats came from a “breakaway group” and not the entire community:

The situation took a turn for the worse two months ago, when the group was informed that each family must make individual applications to the United Nations for relocation.

Fifty Five members accepted the terms, but the remaining 85 refused saying they wanted to be moved as a group. Since then, tensions between the two sides have risen.

Wartnaby claims that on Tuesday the opposing group refused any food or water that was provided and the next morning, he had to call police to disperse the group which was protesting outside his home.

Later that day, the electric fence around his property was cut and Wartnaby later discovered that the main tent had been torched.

Mad World News also claimed that the Wartnaby’s were “threatened with slaughter,” but this, too, seems to be an exaggeration. The article published by News 24, which was the same piece quoted in the Mad World News article, reported that while Wartnaby did feel unnerved by the threats, he did not believe that the group had any intention to follow through on it:

“The parents were screaming that we had ruined their lives and threatened to kill us, but we did not take them seriously. We, however, later called the police.”

Wartnaby said he truly believed that the foreign nationals were making a fuss so that the government would put them up in a refugee camp.

Wartnaby told reporters that while he does not regret taking in the refugees, he does want the breakaway group to leave his farm:

“I am not going to help them anymore. The accommodation is burnt and my fence is cut. We have done so much for them in the last five months, we know every one of them by name, we have loved and cared for them and this is how they chose to respond.

“If they want to reject our help, then it is fine, but I still don’t regret taking them in.”

The Wartnabys also had to contend with pressure from the local municipality, which in September 2015 ordered them to either evict the people living on their farm, or rezone the property for residential use, a costly and time-consuming endeavor.

Wartnaby wrote in a blog entry dated 3 December 2015 that the other group of people staying on their farm “are an entirely different story.” 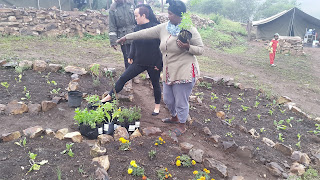 They have decided to do everything they can to improve themselves by learning skills, doing courses and building a resume of skills. They are wanting to leave the farm with a  reference that will help them in the future.
They have joined us as volunteers and are helping on the farm, building walls, planting veg and helping in every way they can.