Another rumor about human traffickers has been spread on Facebook, this one involving lures of free rings from Kay Jewelers placed on the windshields of cars. 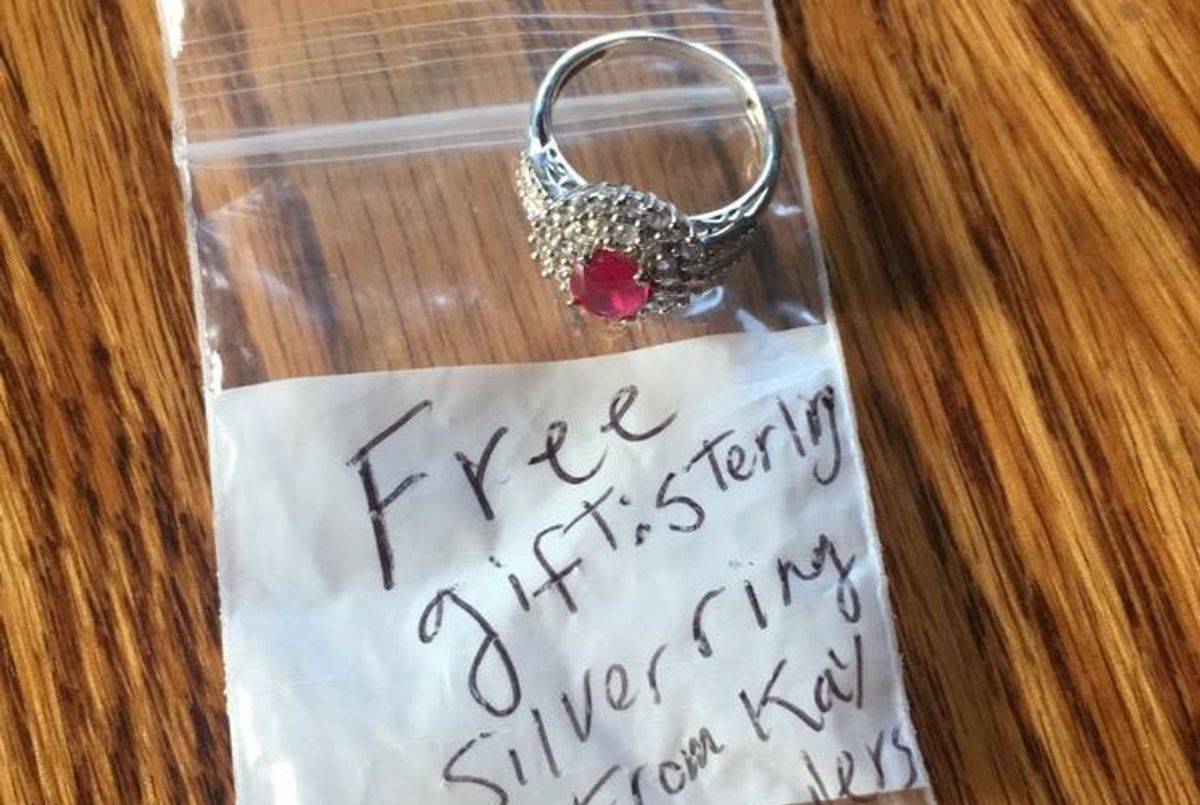 Claim:
A woman was nearly kidnapped by human traffickers using a ring placed on her windshield as bait.
Rating:

On 19 July 2016 Facebook user Savannah Nguyen published the above-reproduced missive to Facebook, claiming that her mother was nearly abducted by human traffickers using a free "gift ring" from Kay Jewelers as bait in the parking lot of a mall in Appleton, Wisconsin.

Nguyen's tale was nearly identical to a constellation of breathless Facebook posts about human trafficking scouts in retail environments (or sometimes other public spaces). In the month prior two similar stories of human traffickers circulated in Louisiana and Rochester, Minnesota about public parks, but rumors circulating in perpetuity about human traffickers tended to involve big box stores. During the summer of 2015, myriad "human trafficking warning" posts went viral on Facebook despite the fact such stories rarely (if ever) reflected reality: In May 2015, a woman made similar claims about an incident in an Oklahoma Hobby Lobby store; in June 2015, Twitter was awash in fear over sex slavery rings targeting college kids during summer job interviews; and later that same month a long-circulating theme park abduction urban legend popped up again.

The prevalence of those rumors seemed to breed a harrowing (and fabricated) account of purported teenaged abductors (armed with heroin-filled syringes) at a Denton, Texas, Dillards department store, a story from a woman who maintained she narrowly avoided a human trafficking ring using gift bags as bait in the parking lot of a Hickory, North Carolina, Walmart store, and subsequent claims Target stores in Tampa, Longview (Texas), and Houston were sex trafficking scouting hotbeds. All the tales proved to be vastly overstated (as was a woman's claim about a similar encounter at a Michigan Kroger store), and typically appended with a lengthy treatise about how such narrow misses are commonplace and could happen to you.

We contacted the Grand Chute Police Department near Appleton, Wisconsin, to ask about the rumor, and their phone lines were so busy that we were initially unable to get in touch with an officer. However, someone from that department eventually returned our call and stated that their investigation revealed no connection to human trafficking, adding it was unclear "who put the ring" on Nguyen's mother's windshield. A post published to Facebook on 20 July 2016 by the Grand Chute Police Department informed residents that police were aware of the claim and investigating it:

The department also told Green Bay station WLUK they "there's no evidence to suggest it is related to sex trafficking."

Putting aside the fear invoked by the claim, the narrative itself isn't deeply convincing. Law enforcement sources have told us over and over again in response to these types of warnings that human traffickers are far more likely to recruit victims by attempting to establish relationships (and even a degree of trust) with them; snatching random victims from store parking lots is not their modus operandi.

Moreover, the use of "bait" such as rings left on automobile windshields makes little sense in this context. The stated goal of approaching and grabbing targets they are outside their vehicles (and thus unable to drive away) could be accomplished much more efficiently by simply intercepting shoppers as they walk through store parking lots. As with similar viral alerts, such warnings posit the unlikely scenario that abductors are going to expend all their efforts placing (valuable) objects on randomly-chosen windshields, then conspicuously wait around for an undetermined amount of time for putative victims to return to those vehicles. Older tales such as those about robbers trapping victims with perfume samples persist in large part due to the entrenched belief that criminals can and do operate in this fashion; therefore, people interpret any encounters that remotely match the story line as affirmative of near-misses with abductors:

Similar unsubstantiated rumors about $100 bills tucked under windshields evidence a lack of familiarity with the mechanics of criminal activity, presenting a scenario that poses more risk and smaller chances of success for opportunistic criminals:

Our law enforcement contacts have also noted that although the process described above could be used by carjackers, they were unfamiliar with any cases of cars being taken in this manner, and the scheme outlined ran contrary to their experience of how carjackers operate. Specifically, they said that carjackings are generally crimes of opportunity, committed by persons in need of quick cash or youngsters either out for a thrill or participating in some rite of passage (such as a gang initiation). Carjackers tend to hang around places where motorists have to stop or exit their vehicles (e.g., intersections, gas stations, car washes, ATMs, freeway on- and off-ramps) and then force the drivers out of their automobiles (or simply take off with the temporarily unoccupied cars). Running around parking lots sticking flyers on windshields and then hanging around to wait for drivers to return to their vehicles involves planning and exposure atypical of most carjackers; they're more likely to approach occupied vehicles (particularly luxury cars with high resale value) and force the drivers out (by threatening them with weapons and/or physically pulling them out of their seats).

As is often the case, the "free gift ring" claim was wholly inconsistent with patterns typically associated with the behaviors of human traffickers (detailed in the United Nations Office on Drugs and Crime FAQ about human trafficking). The story is another variation on an urban legend that has circulated for at least two decades, a period during which we've never located any substantiated instances of bait-related abductions.

All in all, we'd guess the "free gift ring" phenomenon is just a garden variety scam, a form of "pigeon drop" or maybe just an attempt to lure suckers into paying premium prices for cheap jewelry.