Was a Walrus Really Found Sleeping atop a Submarine?

The giant marine mammal apparently spent quite a bit of time on the sub and even enjoyed a nap. But looks can be deceiving. 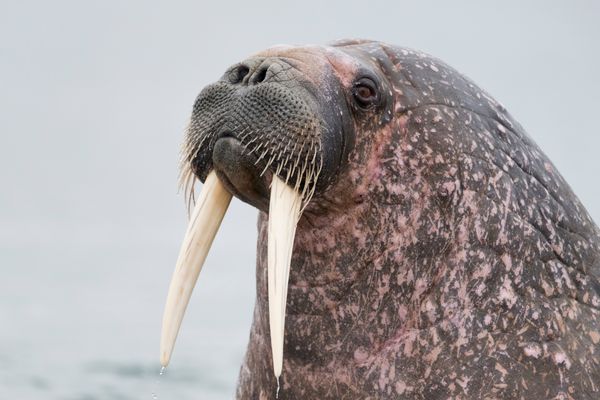 Walrus surface at Sarstangen on Prince Carls Forland, on the west coast of Svalbard. (Image Via Getty Images)

Claim:
A photograph shows a man standing behind a sleeping walrus atop a submarine.
Rating:

A walrus really was photographed atop a Russian submarine undergoing repairs in 2006.

One of the most popular images documenting this encounter with the marine mammal — an image featuring a young man with his arms raised in the air — is actually fake.

A photograph supposedly showing a man with his arms raised standing behind a sleeping walrus atop a submarine has been circulating online for several years: As far as we can tell, this walrus really did take a nap aboard the K-186 Omsk, a Russian submarine, while the sub was being repaired off the coast of the Kamchatka Peninsula. The original photograph, as well as several others we found featuring the same walrus sleeping atop the submarine, carried a time stamp of 16 May 2006: But the most popular image connected to this encounter appears to have been doctored. While the walrus is real, the man shown standing behind the animal with his arms raised high and flashing peace signs was not in the original photograph.

Here's the original photograph (left) and the doctored version (right). Notice how the waves match up in both images. It appears that the man was simply inserted into the background of the original picture:

The doctored version of this image is frequently shared online, along with the claim that the submarine crew was inconvenienced by the sleeping walrus because it was blocking the hatch. The Facebook page "Planet Today," for instance, racked up more than 60,000 shares in April 2019 when it shared the image with the caption: "A huge walrus fell asleep on the hatch of a submarine, blocking the crew from exiting. They had to use the rear hatch to get out."

This caption apparently was pulled out of nowhere. We found no reports to corroborate this claim, and the doctored image was circulating attached to a more mundane caption, "A walrus asleep on a submarine," long before it was associated with the "blocked-hatch" claim.

Furthermore, because this submarine was docked and undergoing repairs at the time of this photograph (not out on the open ocean), it seems unlikely that the crew aboard this large nuclear submarine, which likely has more than one hatch, was inconvenienced by the walrus.