Did Walmart Sell Shirts That Allude to Hanging Journalists?

The retailer removed the shirt after receiving a complaint from the Radio Television Digital News Association. 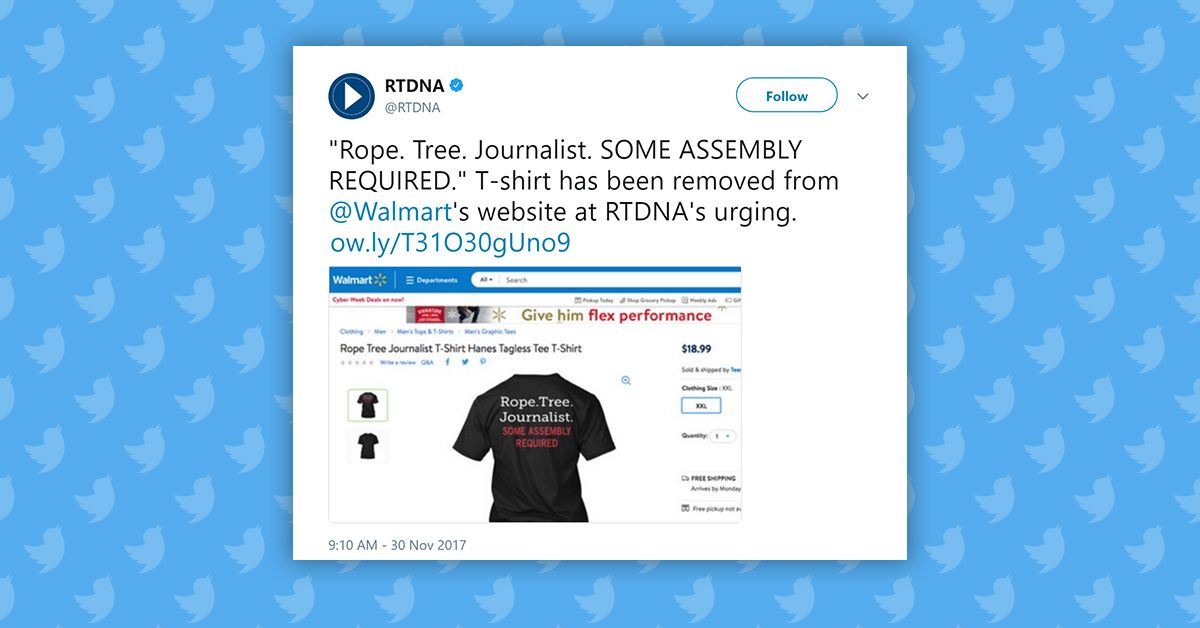 Amid a climate of hostility toward the mainstream news media from President Donald Trump and some of his supporters, further controversy appeared in November 2017 when the retail giant Walmart was accused of selling a shirt bearing a slogan alluding to hanging journalists:

The shirt is real and it was temporarily available for sale on Walmart's online store. It is made by the third-party seller Teespring.com. Walmart removed it on 30 November 2017, a day after the Radio Television Digital News Association (a nonprofit group that represents broadcast and digital journalists) wrote to Walmart executives requesting it be taken down.  RTDNA executive director Dan Shelley wrote:

It is our belief that at the least, T-Shirts or any other items bearing such words simply inflame the passions of those who either don’t like, or don’t understand, the news media. At worst, they openly encourage violence targeting journalists. We believe they are particularly inflammatory within the context of today’s vitriolic political and ideological environment.

As The Hill points out, the same T-shirt first came to national attention when a supporter of Donald Trump was seen wearing it at a rally in Minnesota, two days before the 2016 presidential election:

Journalism can be a dangerous business, particularly in countries in which elected officials are openly hostile to reporters. The Committee to Protect Journalists reports that 48 journalists and eight media workers were confirmed killed as a direct result of their work in 2017 alone.

Update [6 December 2017]: Added clarification that the t-shirt was made by Teespring.com, a third-party seller, and sold on Walmart's web site.