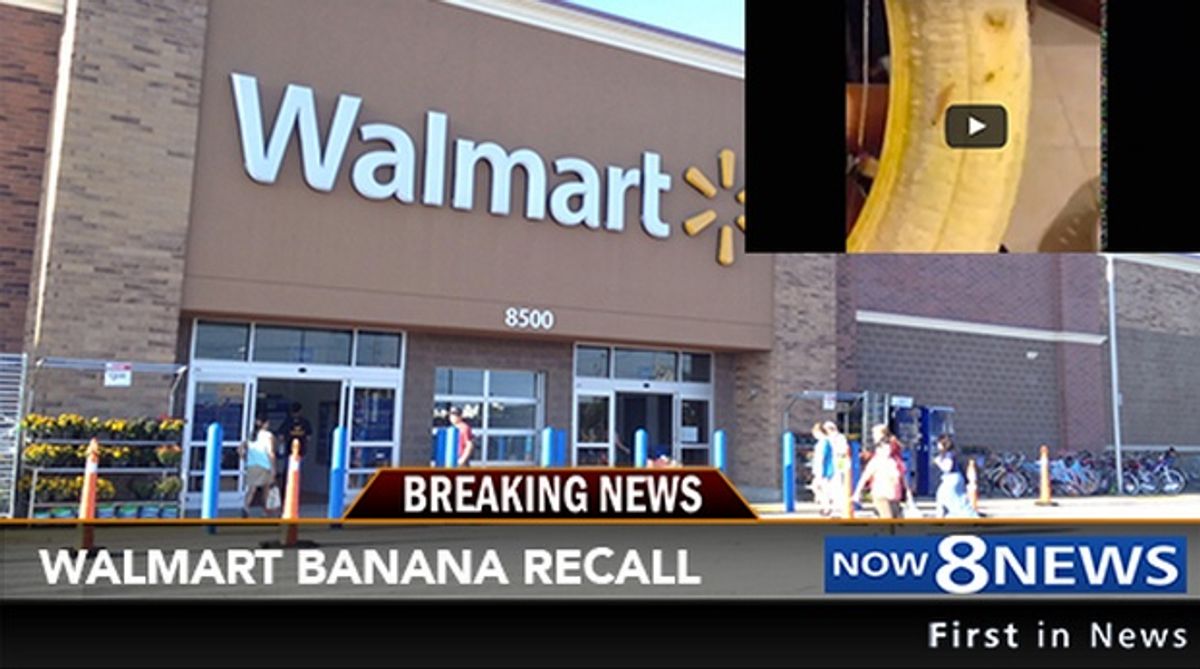 Post on face book from Now 8 News claiming that 7 tons of bananas were infested with Shistosmiasis worms and are being recalled. The parasite is waterborne in various countries including Maylasia, where Walmart gets most its bananas. Alert says not to bring back to the store, but to wrap in plastic bag and throw away. Alert says do not put down the disposal or water supply could be contaminated. Shows video of disgusting worm on banana. Claims several people in the hospital from ingesting the infested fruit. That there is a mass panic. Parasite ingestion could cause symptoms of dizziness, headache, nausea, fatigue, and in some severe cases stroke-like conditions.

Origins:    On 9 August 2015, the web site Now8News published an article titled "ALERT: Over 7 Tons of Bananas Recalled from Walmart Due to Parasitic Worms."

The article claimed that several tons of bananas offered for sale by Walmart were contaminated with a parasitic worm, causing customers to fall ill with the disease schistosomiasi, and that purchasers of Walmart bananas had been instructed to "burn" the fruit:

Although they are recalling bananas purchased between the dates of July 30 — August 6, they are asking consumers NOT to return the bananas to the stores. They are asking, if at all possible, to burn the bananas. If you do not have access to this type of disposal, the World Health Organization is asking you to seal them tightly in a trash bag but DO NOT dispose of them down the kitchen sink. This could contaminate the water supply, as these parasites thrive off of water.

Currently, 187 people have been hospitalized and 23 are in critical condition. Symptoms include dizziness, headaches, nausea, fatigue and stomach bloating. In severe cases, the parasites can affect the nervous system causing stroke-like conditions. If you feel that you have been exposed to the Schistosomiasis parasites you should take yourself to the hospital immediately.

However, the article was just more fake news from Now8News (designed to look like a local television news web site), a new entrant to the burgeoning fake news genre of sites and not a legitimate media outlet. In July 2015, Now8News "reported" that a man was arrested for having sex with a pig in a Walmart bathroom, and that aborted fetuses were used in making Chicken McNuggets.