You might say that, "The Waffle House has found its new host." 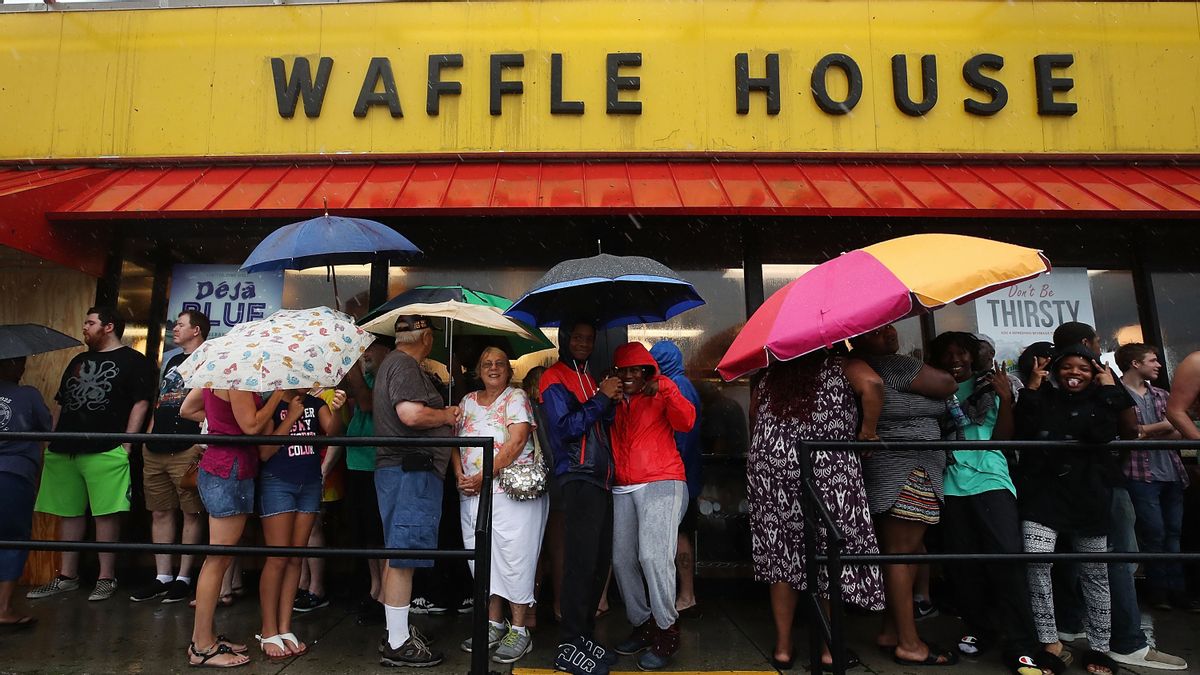 People wait in the rain to enter a Waffle House a day after Hurricane Florence hit the area, on September 15, 2018 in Wilmington, North Carolina. (Mark Wilson/Getty Images)

However, this was nothing more than a satire article that was written for fun. According to the About page on the Mouse Trap News website, "Mouse Trap News was created on a whim to have some fun and write stories about Disney we wish were true." In other words, no, Waffle House wasn't opening in the future inside Disney World.

In the past, readers asked us by email and on social media about other articles published by Mouse Trap News. For example, we previously published about the website's stories that said a man lost his hands on Space Mountain, that YouTuber MrBeast was renting out Magic Kingdom for a day, and that Disney had filed a patent for a roller coaster that jumps tracks.

Part of the satirical article about Waffle House coming to Disney World was written like this:

The addition of Waffle House to Disney World comes after a new agreement was reached to bring the fast food giant into their parks. The agreement apparently specifies multiple Waffle House locations to be built on Disney World property, however, at this moment we are only aware of the one coming to Main Street USA. We are expecting Disney World to add Waffle Houses to all of their parks eventually.

One commenter asked for a "timeline" on when Waffle House would open up, apparently not realizing it was satire. Another user commented, "Please tell me this is a joke." A third person added, "No, I loved Casey's."

Quite a few commenters posted the phrase, "The Waffle House has found its new host." According to Distractify.com, this was nothing more than a meaningless meme to troll the internet that originated with the YouTube account Jonny RaZeR Shorts.

In the video, Mouse Trap News credited user @pgibbs22 for one of the clips. That clip showed a nearly empty, fantasy-like, early-morning walk on Main Street, USA inside the Magic Kingdom, with the 1894 song "The Sidewalks of New York" playing over the loudspeakers.

---. "Is YouTuber MrBeast Renting Out Disney World for a Video?" Snopes, 11 Jan. 2023, https://www.snopes.com/fact-check/mrbeast-renting-disney-world-magic-kingdom/.

Piazza, Bianca. "Why Is 'The Waffle House Has Found Its New Host' Meme Taking Over the Internet?" Distractify, 16 Jan. 2023, https://www.distractify.com/p/the-waffle-house-new-host-meme-meaning.