A video passed off as "voter fraud" committed by Democrats during the 2016 primary was filmed in Russia — and misrepresented. 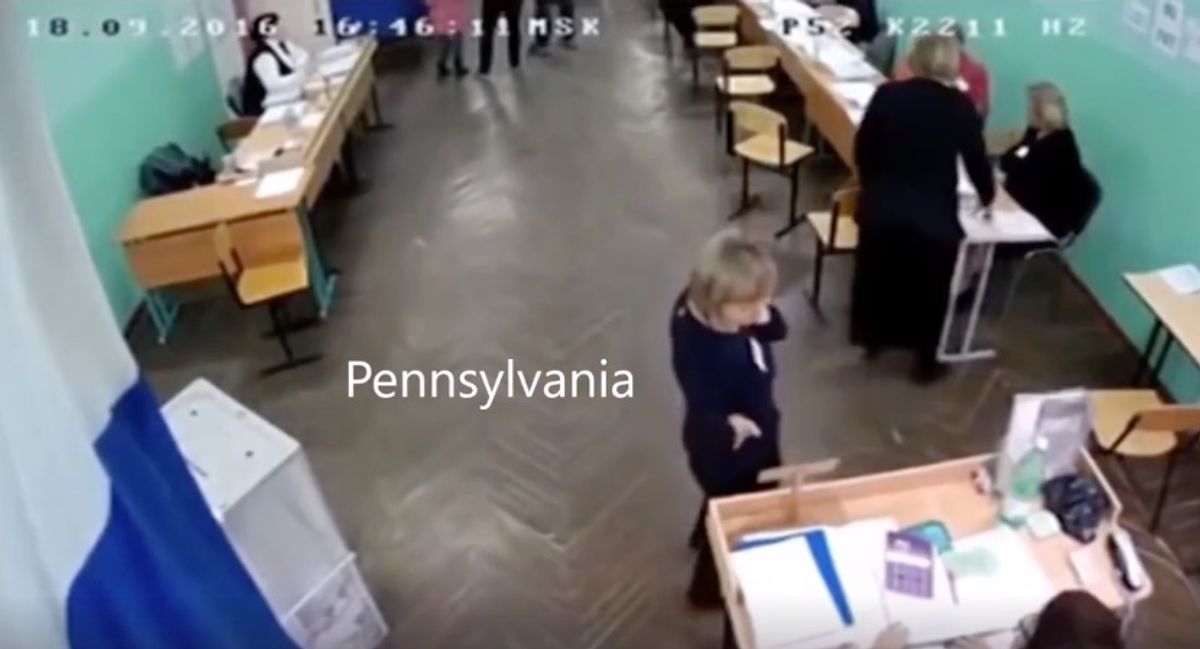 In October 2016, rumors of fraud in the United States presidential election ran rampant. On 12 October 2016, a Facebook page published the status update and video reproduced above, purporting to show "voter fraud" during the Democratic primary in Arizona, Illinois, and Pennsylvania: The update alleged that the individuals depicted are Democrats, stuffing ballot boxes in an act of "voter fraud" in the three states' primaries. However, no portion of the video showed anyone visibly affiliated with any party, or definitively engaging in fraud of any type.

Only the captions transformed the clip of what appeared to be CCTV footage of polling places into electoral fraud at the Democratic primaries, and the activities showed people moving unidentified papers to plastic bins. The nature of the papers was not apparent just by watching the video.

Another discrepancy involved the camera's timestamps. The clip very plainly displayed an 18 September 2016 timestamp wherever such markings were displayed. Democratic primaries concluded on 7 June 2016 (with voting in the states of California, Montana, New Jersey, New Mexico and South Dakota), and it stretched credulity that timestamps would be identically distorted across polling places: The footage from which both screenshots above were taken was labeled "Pennsylvania," a state whose primaries took place in April 2016. But the most compelling tell that the videos were misrepresented (almost certainly with deliberation in mislabeling locations) was that the same exact clips were published to YouTube in September 2016 as purported evidence of election fraud in Russia:

"Voter fraud" is a commonly invoked concern (often coupled with arguments in support of voter identification requirements) typically involving an individual illegally or improperly voting, as in voting more than once, or voter impersonation. In cases of voter fraud (which are rare), the voter stands accused of fraudulent behavior.

By contrast, "election fraud" or "electoral fraud" refers to the manipulation of votes on a larger scale, involving collusion between entities to affect the outcome of an election. Although the definitions for both can be broad (and are sometimes used interchangeably [PDF]), the terms describe the behavior of individuals, versus a larger effort to manipulate an election.

Although it remains within the realm of possibility that election or voter fraud took place in Arizona, Pennsylvania, or Illinois during the 2016 Democratic primary, these videos do not show it. The misdated clips were widely reported as purported vote fraud in Russia during a September 2016 poll, not early 2016 primary voting anywhere in the United States.