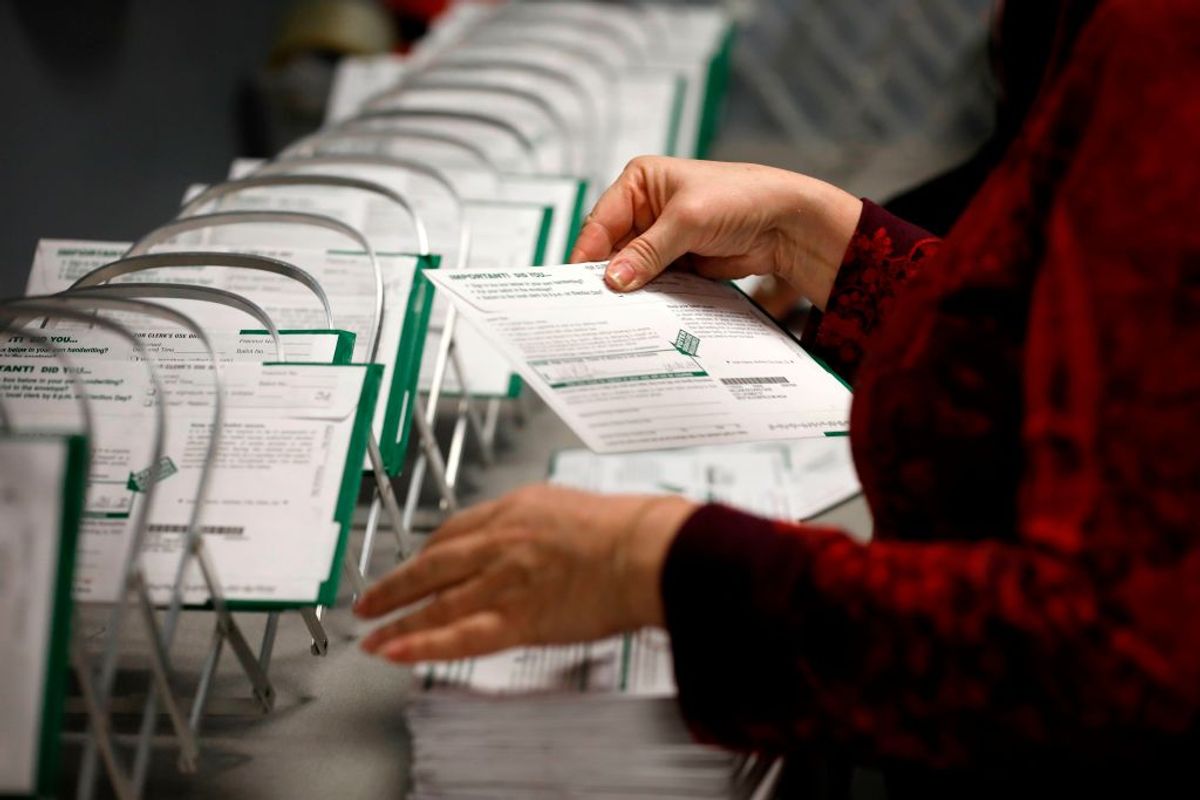 States have varying laws for when poll workers can start processing mail-in ballots and when voters must postmark them. As a result, it took days after polls closed on Nov. 3 in the 2020 presidential election for some states to finish counting ballots for unofficial tallies.

No evidence exists of poll workers breaking laws in the 2020 presidential election to count ballots that were submitted after state-mandated deadlines.

In mid-November 2020, U.S. President Donald Trump's reelection campaign sent emails to solicit donations from supporters and made various claims without evidence that widespread voter fraud had corrupted the election's outcome. One rumor in particular claimed Americans had cast ballots after polls closed on Nov. 3 and that states included those votes in results that projected Democrat Joe Biden the country's 46th president. (Read more fact checks like this one here.)

"Votes cannot be cast after the Polls are closed!" the Trump campaign claimed in a Nov. 9 email obtained by Snopes. Another fundraising email on Nov. 20 stated, "Voting reportedly took place after the Election was over."

Together, the emails claimed — without showing evidence — that an unknown number of people submitted ballots in the presidential election between Biden and Trump after state-mandated deadlines, and that election officials considered those votes valid.

First, let's unpack the logistics of U.S. presidential elections. All states require voters to be U.S. citizens, over age 18, and meet certain residency requirements to legally vote — no matter if they fill out ballots in-person at polling sites or vote by mail. But every state has its own set of laws governing when and how eligible residents can vote.

Those different types of ballot-casting systems were at the heart of the Trump campaign's claim about voting deadlines.

State laws prescribe when polling places open and close on Election Day. Per the National Conference of State Legislature's compilation of those varying deadlines, the earliest sites open at 6 a.m. (in locations' respective time zones) and most close about 14 hours later. That means if you're a voter on the East Coast, polling shuts down roughly six hours before sites close in Alaska and Hawaii.

Additionally, people who are still waiting in long lines to cast their vote when polls close may still vote if they remain in line. "If you leave the line, you may not be able to vote," says Vote.org, a nonpartisan voter-rights website.

There was no proof of poll workers breaking those laws to allow voters to submit ballots for Biden or Trump in the late hours of Nov. 3 or afterwards.

But here's what was key: Not everyone votes for president in person at the polls on Election Day.

Even before the COVID-19 pandemic forced states to expand vote-by-mail systems to avoid spreading the virus at polls — resulting in a record number of mail-in ballots — every state allowed certain voters to cast ballots by mail, otherwise known as absentee voting, if those people requested the alternative before Election Day. Also, Colorado, Hawaii, Oregon, Washington, and Utah allowed all registered voters to cast ballots entirely by mail before 2020, while laws in more than a dozen other states permitted local jurisdictions to run elections completely by mail under certain conditions.

Let us circle back to voting logistics. While state laws govern all types of voting, those statutes in most states grant counties the authority to administer elections via a board of electors, an election official or officials, or both. As a result, thousands of local jurisdictions — not politicians in Washington, D.C, or governors — oversee the process of reviewing and counting ballots at polls.

In other words, local governments are responsible for training poll workers to correctly remove mail-in ballots from their envelopes, check to see if voters' signatures are valid, and then feed papers with voters' selections into voting tabulation machines.

At least 33 states allow poll workers to start doing some of that work one week, or more, before Election Day, according to NCSL. That means people who mailed ballots in the days or weeks before Nov. 3 in the Trump-Biden race may have had their paperwork processed before in-person polling started. See Pew Research Center's map of processing laws for mail-in ballots below. On the flip side, laws in six states, including the battleground states of Pennsylvania and Wisconsin, do not allow poll workers to begin processing ballots until Election Day.

At that point, statisticians compare the sum of votes processed and counted to the difference in totals between the losing and winning candidate, all on a state-by-state basis. When there appears to be no mathematical possibility for a losing candidate to overcome the competitor in a state, a winner is projected there.

But those calls do not signify the end of ballot processing and vote counting — even though the remaining votes would not shift the election's outcome. In 22 states and the District of Columbia, poll workers are legally required to count all valid ballots that were postmarked by Election Day, or a few days before, per Pew Research.

As a result, ballots that did not reach polling sites for processing on Nov. 3 — but showed an official postal marking for that date — were just as valid as ballots cast in-person on Election Day, under those states' laws.

There was no evidence of any state or county breaking those laws governing postmark deadlines in the 2020 presidential election to undermine Trump.

After local jurisdictions count all ballots in the days, or weeks, after Election Day, local election boards certify the results — making the voter tallies official. (See our investigation here into claims that that voter certification process allowed an opportunity for Trump to defy the outcome of the popular vote.) Then, state executive authorities seal state’s results via a “Certificate of Ascertainment," and electors cast votes for president via the Electoral College.

We should note here: The emails from Trump's campaign alleging voting crimes asked supporters to chip in to a so-called "Official Election Defense Fund" or "Election Defense Task Force," both of which the campaign framed as costly initiatives involving ballot recounts or various lawsuits to challenge Biden's win.

In sum, because there was no evidence to show poll workers illegally counted votes for Trump or Biden after polls closed on Election Day, nor after the postmarking deadlines had passed, we rate this claim "Mostly false."

Previous Article
Next Article
Article 4 of 12 in Collection