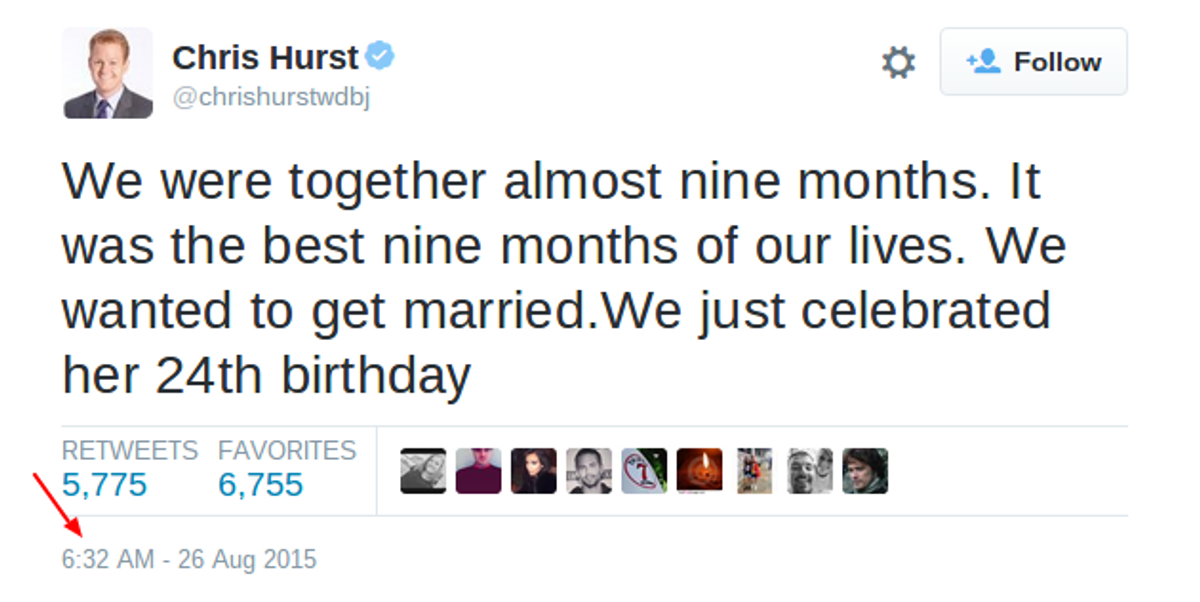 FACT CHECK:   Was a tweet sent by journalist Chris Hurst about the death of his girlfriend Alison Parker published before the shooting occurred?

Claim:   A tweet sent by journalist Chris Hurst about the death of his girlfriend Alison Parker was published before the shooting occurred.

There's a big buzz about the tweet of Chris Hurst, the VA news reporter's fiance', that is said to have a 6:34am timestamp, while the shooting video has a time of 6:45am. Many are saying it's all a fake, a false flag, just the government trying to push for gun control, etc. And saying the woman's father didn't show "enough emotion", being more intent on his urging for more gun laws.

Please look into this, so all this alternative reality noise can end.

And on the twitter page, it shows the tweet with a 10:34am time on it, which the naysayers would simply say is a cover-up after the fact.

This cannot be an error. Time Stamps cannot lie. They both lived and worked and were in the same time zone. I guess this is another FALSE FLAG. There are no timezone errors. Google the time of shootings and they will show it occured at 6:45 am. Even Google 6:45 am and tons of news reports stated that was the time.

Origins:   In the early morning hours 26 August 2015, journalists Alison Parker and Adam Ward of television station WDBJ were shot and killed in the course of filming an otherwise routine live segment at Smith Mountain Lake in Moneta, Virginia.

Parker, 24, and Ward, 27, died at the scene; Vicki Gardner (who was being interviewed by Parker at the time of the shooting) was wounded but survived. Ward was live on-air when the gunman (later identified as 41-year-old Vester Lee Flanagan, known professionally as "Bryce Williams") began shooting at approximately 6:46 AM. The initial chaotic moments of gunfire were aired live to viewers before the broadcast switched over to ​anchor Kimberly McBroom (visibly shaken by the unfolding events). Flanagan uploaded footage he captured of the shootings to his social media accounts, and although those videos were later removed, individual users had by then captured and shared them.

Among the details that emerged after the shooting were personal tidbits about Parker and Ward, both of whom were romantically involved with fellow WDBJ employees. Ward was engaged to producer Melissa Ott, and Parker lived with fellow anchor Chris Hurst (though the pair had kept their relationship quiet prior the shooting). After Ott and Hurst learned of the tragic incident, both took to social media to acknowledge the sudden deaths of their significant others. Hurst expressed his grief in a series of tweets:

We didn't share this publicly, but @AParkerWDBJ7 and I were very much in love. We just moved in together. I am numb. pic.twitter.com/tUrHVwAXcN

We were together almost nine months. It was the best nine months of our lives. We wanted to get married.We just celebrated her 24th birthday

Soon after the shooting was reported, a number of social media users weighed in on the events. Some of those users opined that the high-profile murders were a "false flag" event perpetrated to create support for gun control measures. To support that assertion, users pointed to timestamps on screenshots of Hurst's tweets that indicated they were published at 6:31 and 6:32 AM respectively (more than ten minutes before shots were fired at Parker and Ward): Since the attacks of 9/11 (and subsequent "inside job" conspiracy theories), the specter of false flag attacks has risen after nearly all high-profile incidents of violence: a mass shooting in Aurora, Colorado was rumored to have been staged, the Boston Marathon bombings inspired rumors of the same type, and the Sandy Hook massacre was fraught with perceived "inconsistencies" in the "official narrative" of the tragedy.

While several threads of speculation about the Virginia shooting have since circulated, the timestamp rumor is by far the most prominent (despite the alacrity with which it could be dismissed). It's true that users on the West Coast will see Hurst's tweet with a timestamp out of line with the timeline of the shooting, but that curiosity is simply due to the fact it occurred at 6:46 EDT (or 3:46 AM PDT).