The video, which went viral instantly, was allegedly shot in the Devonwood neighborhood of Fort Myers, Florida. 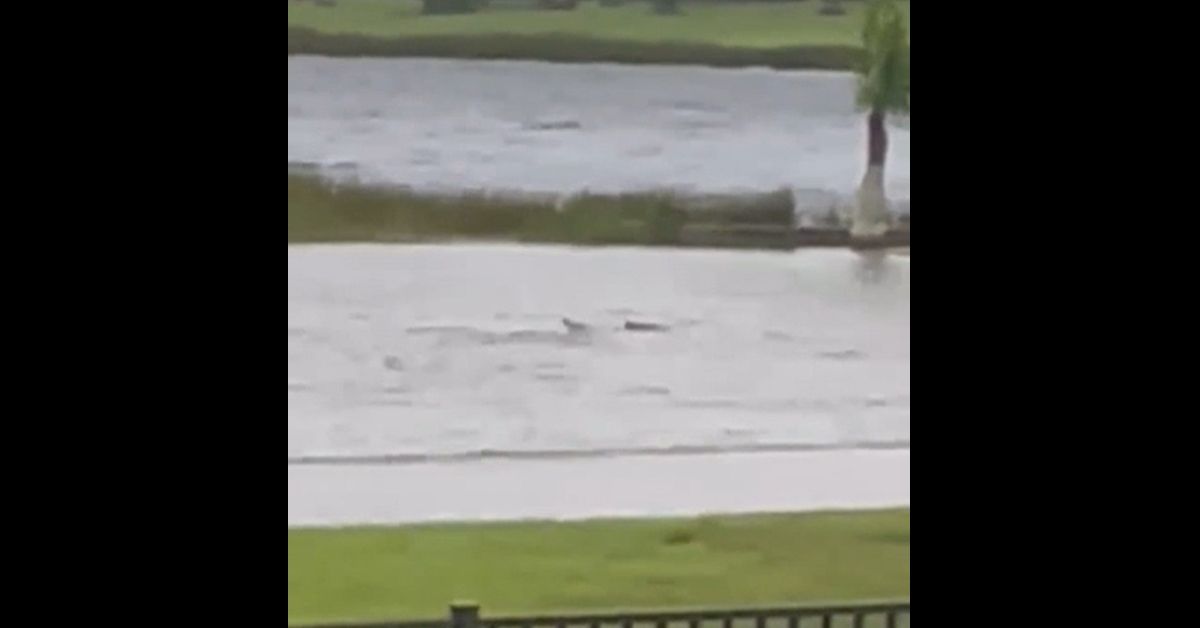 Claim:
A viral video authentically shows a shark swimming in a flooded street of Fort Myers, Florida, during Hurricane Ian in September 2022.
Rating:

The video is authentic and was shot by Fort Myers resident Dominic Cameratta as Hurricane Ian made landfall on Sept. 28, 2022. However ...

It has not been established with any certainty that the aquatic animal in the video is a shark.

In late September 2022, as Hurricane Ian was beginning to make landfall along the southern Florida coastline, a 10-second, low-resolution cellphone video that allegedly showed a shark swimming in floodwaters in Fort Myers went viral:

The viewing audience on social media was split as to its opinion on the authenticity of the footage. Many thought it was genuine, or at least likely so. Others, perhaps because they were more in tune with the long history of image fakery on the internet during major hurricanes, were skeptical. Some even insisted they'd seen the video before in connection with other hurricanes. Skeptics and believers alike tagged Snopes, or searched our site, to try to authenticate it. As of this update, we can confirm the video is real, though the question of whether the creature seen in the video is a shark or some other type of aquatic animal remains unanswered.

Given that a massive storm surge struck Fort Myers Beach on nearby Estero Island at approximately that hour, it's plausible that there was already some inland flooding.

We contacted a Twitter user named Brad Habuda, who was credited in one of the most viral tweets as the source of the video. Habuda told us (as well as his followers) that the footage was shot by a person named "Ed Bell" in Devonwood, a Fort Myers neighborhood. We asked Habuda additional questions about the video — such as how he obtained it — but he did not address them. Furthermore, no one under the name "Ed Bell" stepped forward to take credit for, or provide more details about, the video, nor were we able to locate that person.

A separate Twitter account, @TruthsBeTold, tweeted the earliest known instance of the video, and that user told his followers that the video was shot by an unidentified friend. "Ok, I see everybody is wondering if this is the real deal or not," @TruthsBeTold tweeted. "It’s real and it’s from today. For obvious reasons my friend who sent this is a little out of communicato at the moment. I will be letting him know all those who have contacted me about the rights once he is safe." There were no further details about the friend in that account's timeline, including whether he is the same person mentioned above, "Ed Bell."

A Sept. 29 thread tweeted by Storyful Deputy News Editor Rob McDonagh revealed the name of the person who actually did shoot the video, a Fort Myers resident named Dominic Cameratta, who provided proof that he shot it in the form of a pair of MP4 files whose metadata shows a creation date and time of Sept. 28, 2022, at just after 8:00 a.m. We contacted Cameratta, who had little to say beyond confirming that the video was his and not a hoax, but he did share the MP4 files with Snopes for verification. We also contacted McDonagh, who walked us through the steps he took to find and vet Cameratta.

In sum, the video is real and was shot by a Fort Myers resident on Sept. 28, but though the animal in the video appears to be a shark, and may well be a shark, we have no way to verify that, and it may not be possible to do so given the poor quality of the image.

Update [Sept.29, 2022]: Updated to confirm the video is real; rating changed from "Research in Progress" to "Mixture."