The Fourth of July festivities became the internet’s punchline. 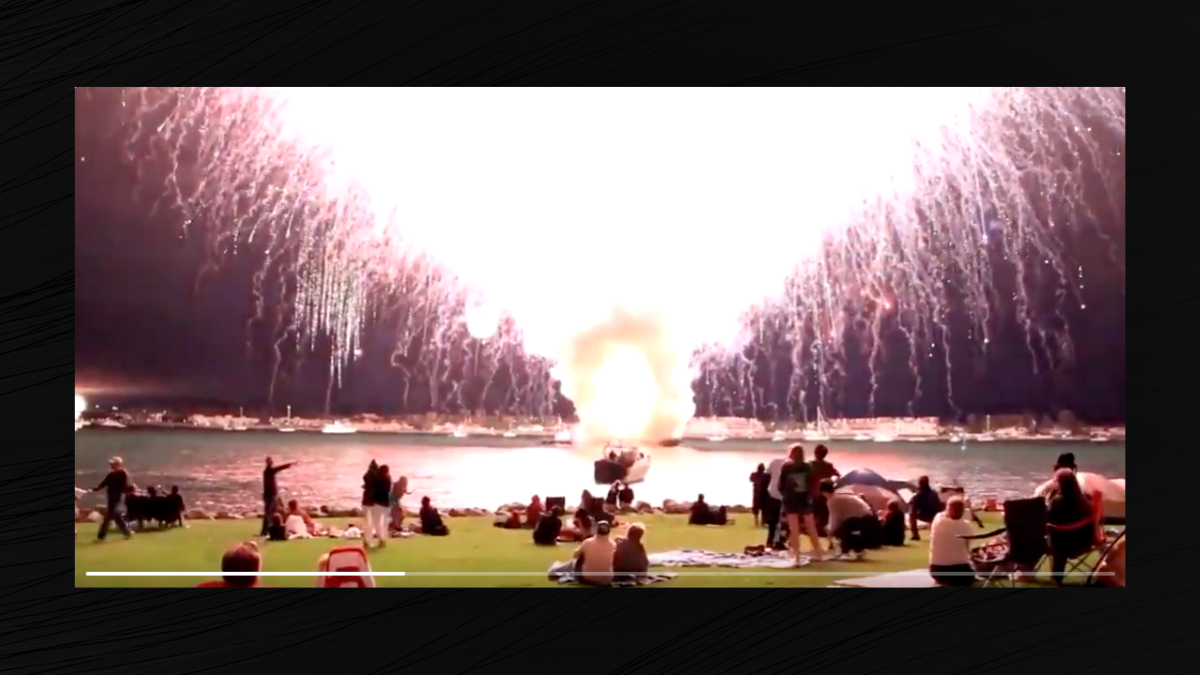 Claim:
A video shows 7,000 fireworks accidentally going off at the same time in San Diego, California, on July 4, 2012.
Rating:

Fourth of July weekend is replete with fireworks and pyrotechnics, but one 2012 display went totally wrong and is still being discussed a decade later. A video went viral on July 4, 2022, reminding us of the time that 7,000 fireworks were accidentally set off in San Diego, California, a decade ago.

This video was originally posted by Dan Roy on July 7, 2012, on YouTube, and appears to show one angle of the accidental display from that day.

While Snopes has covered Fourth of July embarrassments before, this one is a real misfire.

According to a report from the The San Diego Union Tribune, the fireworks went off when the show’s producers, Garden State Fireworks, “experienced a computer glitch that caused 7,000 fireworks to go off in roughly 30 seconds.” The fireworks display used to be known as the Big Bay Boom, but after the event, news outlets referred to it as the Big Bay Boom Bust of 2012.

Thrillist reported an oral history of the event in 2015, and spoke to Dan Roy, the man behind the video about what he experienced when it was taken. He said:

It was my first time seeing the fireworks in San Diego. Traffic was really backed up downtown. There were a couple hundred people on the grass with blankets and coolers, kind of tailgating it. I decided at the last minute to run down to my car and grab my camera.

We could see the barge right close to where we were. There was no countdown. I had my back turned to make sure the lighting settings were right on the camera, and that’s when I heard the explosion.

Somehow people were not running away. People were cheering really loudly at the end. They were looking at each other like, That was amazing! I can’t even imagine what’s happening next.

Everybody was in shock and waiting for something else. All this debris started raining down on our heads; it looked like burned-up toilet paper rolls. It was gross and weird. That was one confirmation that something was wrong. The other confirmation was that the barges just slunk away without a word.

He also discussed the aftermath of uploading the video:

I knew I had a good video but I didn’t think I was the only person who had a nice DSLR camera. I posted it on the San Diego subreddit and then someone reposted it to videos and it went to No. 1. That’s when it really hit. [...]

I got a phone call from a TV station in Japan that wanted to show it. I got an email from Rock Center with Brian Williams. And somebody from CNN called. I made $3,000 for just pointing a camera in the right direction at the right time, which was nice considering it was totally an accident.

The Thrillist report also shared his original video. His video was reposted in the Chicago Tribune and the official Big Bay Boom website. The latter website even included a video of the unplanned fiasco from another angle, showing more than one display going off:

Sandy Purdon, the sponsor and producer of the event, even saw the video and invited Roy to his event the next year, according to Roy: “Sandy Purdon found out who I was and invited me to come film the fireworks at his place the next year. The party was packed. He was definitely nervous.”

But according to Purdon, Garden State returned the next year, gave them a free event, and did a “great job.”

Given that numerous media outlets and the organizers of the display picked up his recording, and he has spoken about it at length, we rate this claim as “True.”