Was This Victorian-Era Contraption Meant To Keep Vampires in Their Graves?

In reality, these "mortsafes," as they were called, were designed to thwart grave robbers, not vampires and zombies. 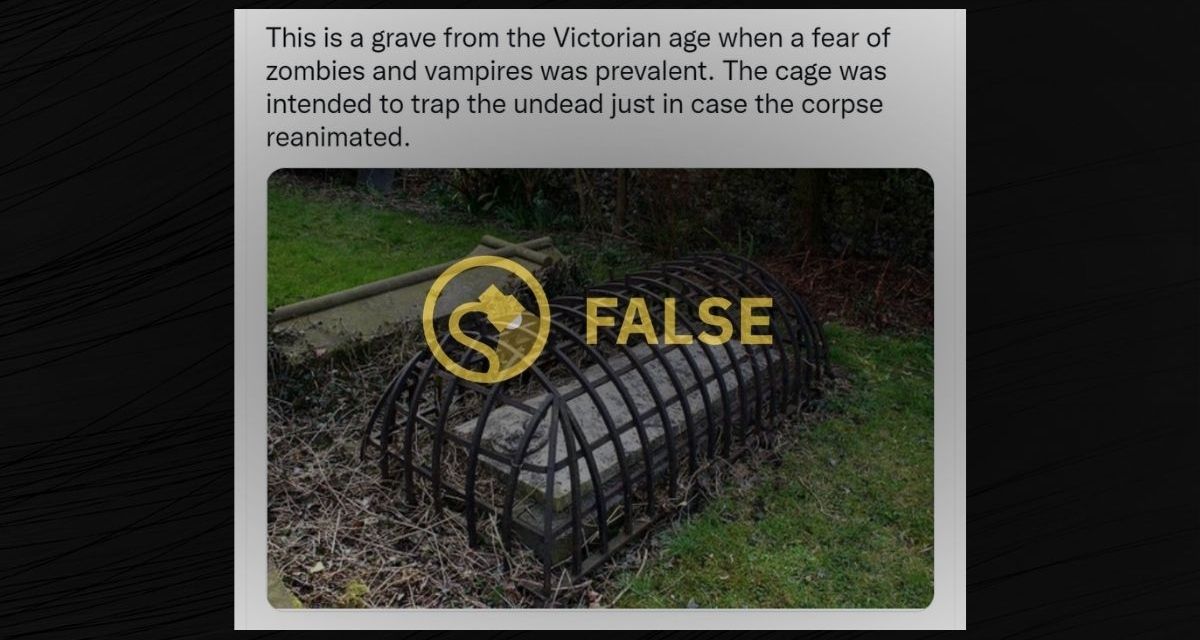 Claim:
People in Victorian England were so afraid of zombies and vampires that they built cages to trap the undead in their graves in case the corpse reanimated.
Rating:

Since 2012 or so, photographs of peculiar-looking gravesites enclosed in wrought-iron cages have circulated online with captions declaring that the purpose of the cages was to prevent vampires and zombies from escaping their graves and terrorizing the living: The text in the above post reads: "This is a grave from the Victorian age when a fear of zombies and vampires was prevalent. The cage was intended to trap the undead just in case the corpse reanimated."

Interestingly enough, structures like these, called "mortsafes," can indeed be found in old graveyards around the U.K., and do date from the early Victorian era. However, they were not designed to keep the "undead" in; they were meant to keep the living out. Grave robbing was a serious problem in the early 1800s, and these sturdy cages were one method people came up with to protect burial sites from disturbance (another was covering the graves with heavy stone slabs).

Mortsafes were a Scottish innovation, which is unsurprising given that Edinburgh was a major hub of anatomical study during this period and it was difficult, due to antiquated laws, for researchers to maintain a sufficient supply of medical cadavers. That, in turn, led to a thriving illegal trade popularly known as "body snatching." An 1896 article in The Hospital, a British medical journal, looked back on that time:

It is now more than sixty years since the Anatomy Act was passed, and there are probably few who remember, except as a tradition, the horrors of the preceding time, when the medical schools were supplied with subjects for dissection chiefly by men who stole corpses from the grave. These men were called body-snatchers, or, in a slang phrase, "resurrection men." Respect for the dead made the idea of this violation of the grave horrible to the survivors, and various means were devised to secure that the bodies of the beloved dead should remain undisturbed. The iron coffin, instead of the usual wooden one, was so intended. A heavy iron cage, called a "mortsafe," was another. Mortsafes were of various kinds. Some formed almost a house of iron bars, with a locked gate to it. Others lay flat on the grave, and consisted sometimes entirely of iron, and sometimes of a border of strong masonry with iron bars on the top.

The Anatomy Act of 1828 provided for the licensing of teachers of anatomy and set standards for the legal donation of bodies for dissection, effectively eliminating the market for stolen corpses.

As for vampires and zombies, there is scant evidence that the Victorians, as a whole, lived in terror of "undead" creatures escaping from the grave. Similar to today, most people understood vampires to be creatures of folklore and fiction. A few well-read Europeans of the time may have been aware of tales about the existence of "zombies" via reports of travelers to the Caribbean, but unlike the crazed, cannibalistic "walking dead" we know today in popular films and TV series, zombies as described in Haitian folklore were dead people reanimated in Vodou ("Voodoo") rituals and forced to serve as slaves. No one would have expected to see one pop out of a grave in Victorian England.