An individual named Vermin Supreme continually runs for office but openly remains a performance artist, rather than a serious candidate. 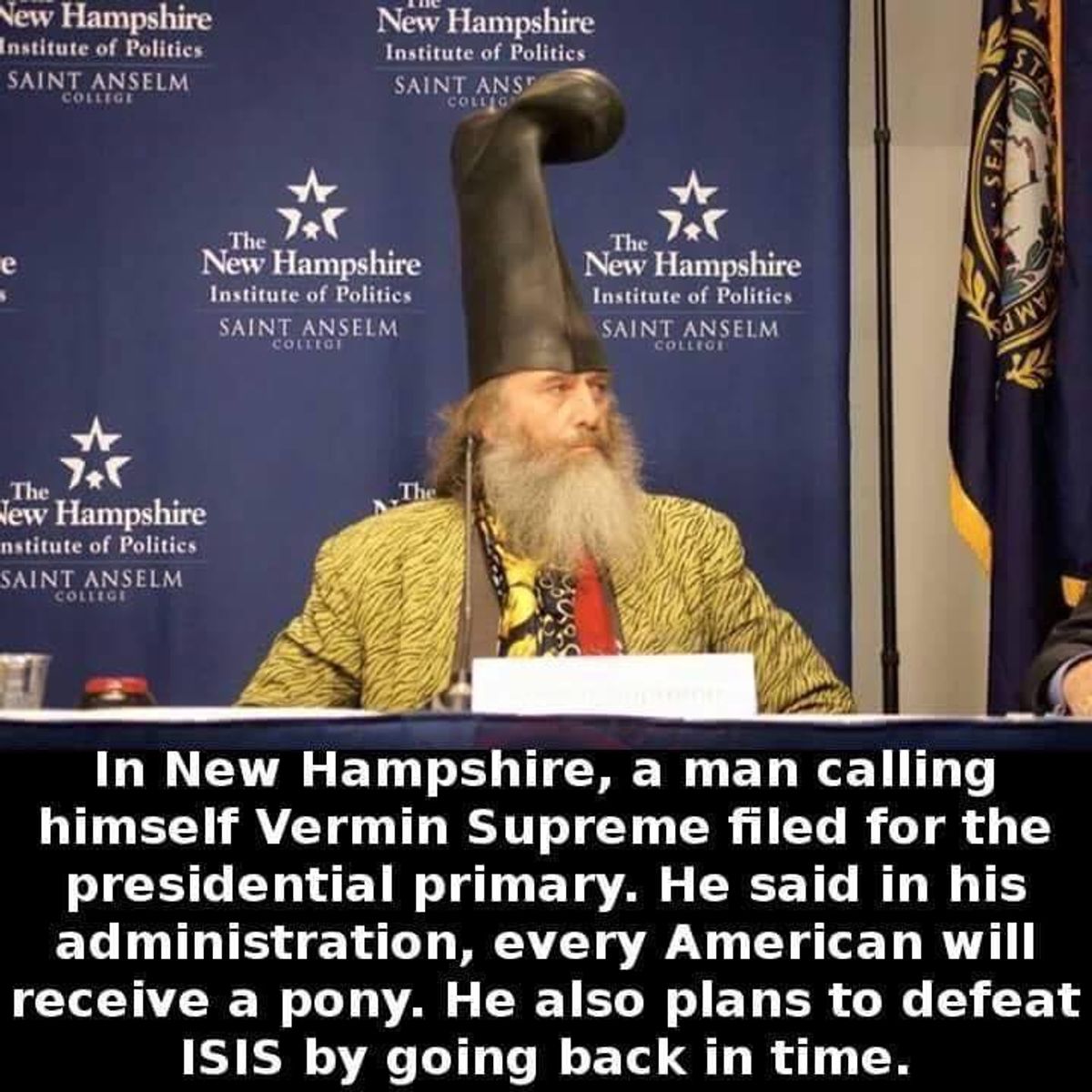 Claim:
A candidate named Vermin Supreme is running for President in 2016 on a platform of free ponies for everyone.
Rating:

Vermin Supreme purports to be a legitimate political contender.

The above-reproduced meme, which has been circulating on social media for an indeterminate amount of time, showed a man wearing two ties and a boot on his head.  It maintained:

In New Hampshire, a man calling himself vermin supreme filed for the presidential primary. He said in his administration, every American will receive a pony. He also plans to defeat ISIS by going back in time.

On 24 November 2015, the web site deathandtaxes published an article titled "Vermin Supreme running for president, still wants to give everyone a pony"; that item subsequently explained the "candidate" was no newcomer to politics and had been engaging in acts of political art and protest since the 1980s:

In a field that includes 30 Republicans and 28 Democrats, the Maryland Democrat stands out for his unique headgear, lush, wizard-like beard, and consistently pro-pony platform. Asked about how he’d defeat terrorists, he answered “Hooves on the ground and boots on our heads!” Political Monitor reports that Mr. Supreme paid his $1,000 registration fee in $50 bills marked “not to be used for bribing politicians.”

Of course, this ain’t his first rodeo; this will be the protest candidate’s seventh run for president of these United States, and he’s been using absurdist humor to agitate against bourgeois democracy and stir up protest votes since the 1980s. But with “serious” candidates for president like Ben Carson and Donald Trump getting more outlandish by the day, the Vermin message seems more relevant than ever.

An ABC.net.au article titled "Vermin Supreme 2016: Alternative US presidential candidate promises free ponies for all" reported that the "bearded eccentric ... regularly sports a boot on his head" and "has been running for public office since 1987":

A well-known performance artist and activist has declared he will run as a US presidential candidate on a free pony platform.

Vermin Supreme filed his paperwork for the New Hampshire presidential primary ballot on the last day before applications closed, along with the registration fee of $US1,000 — which he paid in $50 bills marked "not to be used for bribing politicians".

"The pony-based economy is truly the most important issue in America today. Fossil fuels are literally killing the planet, and today, we stop that," he told the crowd gathered for his filing.

"We don't need no more cars, we have ponies."

The approximate date on which the above-reproduced meme was created was unclear, but the image in question appeared no later than May 2012, and was unrelated to Vermin Supreme's November 2015 filings. A 21 January 2016 CNN  piece titled "The presidential candidates you've never heard of" reported that Supreme's earlier campaigns were thwarted by a ban relating to "property damage" during a 2011 debate:

At the last lesser-known candidate debate in 2011, he stood up and poured glitter over the head of one of his competitors in order to, in his words, "make him gay."

Supreme was barred from the forum this year for "property damage" and relegated to a zone surrounded by police tape outside the debate hall, where he stood with two toy ponies, a campaign sign painted onto a boogie board and a giant boot on his head.

A 2012 item from CNN described Supreme's 28 August 2012 appearance outside the Republican National Convention in Tampa:

The gray-bearded hippie standing between them wore a boot on his head.

"Between the cops and the protesters, there's a vacuum. That's the space I occupy," Vermin Supreme explained afterward. "It looked a little scary. It looked like it might get tense."
The self-described "friendly fascist," who is a perennial presidential candidate and veteran of countless protests, recited passages from police manuals on crowd control tactics. Using the bullhorn, he urged calm: "Nobody needs to get hurt here." A man next to him started to warble "Over the Rainbow," and Vermin Supreme felt soothed. He held the bullhorn close to the singer, letting the melody wash over the crowd of about 150.

The tension melted away. It was, he said, "a beautiful moment."

So while it's true Vermin Supreme has been throwing his hat (or boot) into the ring electorally since roughly 1987, his forays were never intended to be serious campaigns. Supreme is a performance artist, and political events are a common medium through which he performs.