Disreputable viral web sites matched an unrelated photograph with claims that a study had linked e-cigarettes with popcorn lung. 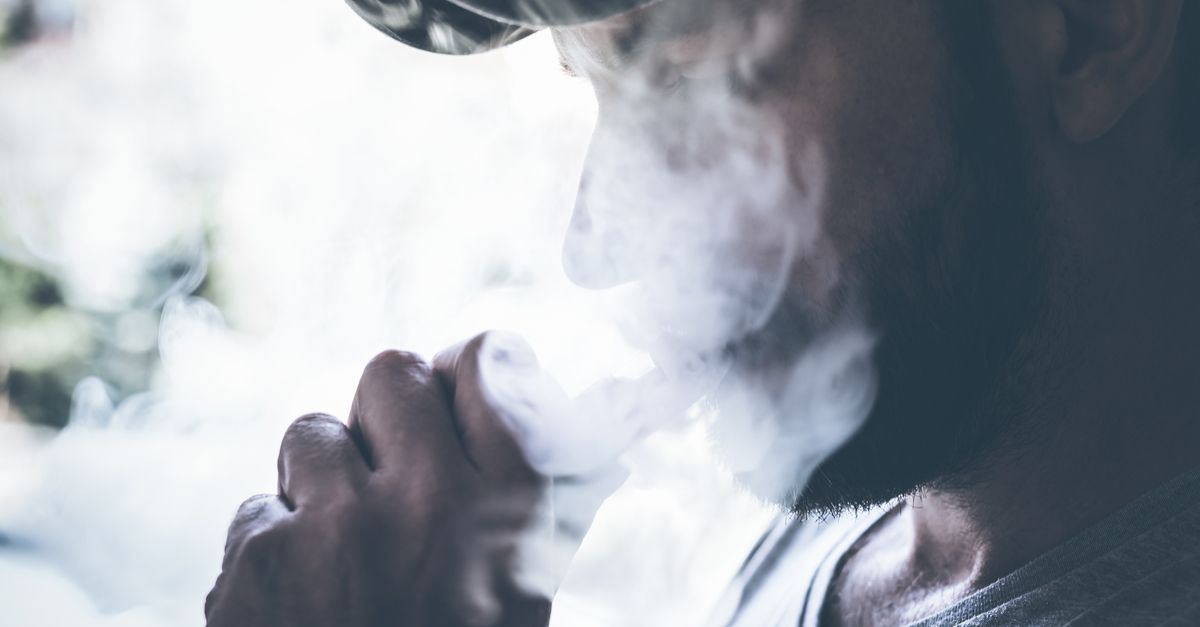 Claim:
A study proved e-cigarette use (or vaping) leads to an incurable condition known as "popcorn lung."
Rating:

A December 2015 Harvard study concluded that diacetyl, which is associated with popcorn lung, is present in e-cigarettes,.

The Harvard study did not prove a link between e-cigarettes and popcorn lung; it simply stated that the possibility should be explored through additional research.

In early August 2016, a number of disreputable clickbait web sites published identical photo galleries alongside claims that a new study had proved e-cigarettes cause0 an incurable condition known as "popcorn lung" (a common term for bronchiolitis obliterans, a disease that results in obstruction of the smallest airways of the lungs due to inflammation and leaves sufferers coughing and feeling short of breath):

Most users who shared the story inferred that the man pictured in those photographs was a popcorn lung patient. But a reverse image search revealed that he was in fact the victim of a 2015 e-cigarette explosion, not a pulmonary disease: A 22 November 2015 report by Memphis TV station WHBQ documented that the young man seen in these images was a college student who was injured when an improperly assembled e-cigarette exploded, in what was described as an avoidable accident:

The injuries a college student sustained when an electronic cigarette exploded in his face could have been prevented if the man had been taught to use the e-cigarette properly, a smoke shop employee said. Meanwhile, the man's family is sharing their story to try to keep the same accident from happening to another person.

E-cigarettes are sold in parts. The two main parts are the battery tank and the coil on top that heats to create the vapor. [Vape shop owner Mary Grace] Burns said the combination that made up Caples' cigarette was incompatible.

Burns said e-cigarette users should buy their products from trusted stores, and be weary of online dealers.

The confluence of identical articles connecting the unrelated image with "popcorn lung" led many sources to link to a December 2015 AOL article, which in turn linked to a Harvard School of Public Health study published that same month. However, the Harvard study did not definitively link e-cigarettes to popcorn lung; rather, the research, which tested 51 of 7,000 available e-liquids, concluded:

Our findings confirm the presence of diacetyl and other flavoring chemicals in flavored e-cigarettes. Because of the associations between diacetyl and bronchiolitis obliterans and other severe respiratory diseases among workers inhaling heated vapors containing diacetyl, urgent action is recommended to further evaluate the extent of this new exposure to diacetyl and related flavoring compounds in e-cigarettes.

While the initial findings might have appeared worrisome, the presence of diacetyl in e-liquid was not first discovered by Harvard researchers. E-cigarette vendors had widely disclosed its presence in e-liquids as early as 2014, one year prior to the Harvard research. Diacetyl's presence in e-juice at variable levels remains a controversial issue among e-cigarette merchants and users, but it was hardly a secret before the 2015 study.

Concerns about diacetyl and popcorn lung largely stemmed from a paper published by the Centers for Disease Control (CDC) in 2002 pertaining to a cluster of eight cases of "a respiratory illness resembling bronchiolitis obliterans" among workers at a popcorn factory, circumstances that led to the colloquialism "popcorn lung." But that paper was somewhat inconclusive, reporting that:

Assuming exposure to factory work contributed to reported occupational lung disease, former workers had 1,148-2,819 person-years at risk, depending on assumptions about whether risk for disease continues after employment ceases. On the basis of the eight cases reported during this period, the calculated rate of illness was 28-70 cases per 10,000 person-years. Assuming that all eight reported patients represented cases of occupational lung disease, this represents a five- to 11-fold excess over the expected number of reported occupational respiratory conditions attributed to toxins.

MoDHSS and CDC investigated the worksite for possible exposures to airborne respiratory toxins, but found no known substance that could explain the illnesses ... Industrial hygiene sampling conducted during the November 2000 survey detected approximately 100 VOCs in the plant air. Diacetyl, a ketone with butter-flavor characteristics, was measured as a marker for exposure to flavoring vapors. The geometric mean air concentration of diacetyl was 18 parts per million parts air (ppm) in the room where the mixing tank was located, 1.3 ppm in the microwave-packaging area, and 0.02 ppm in other areas of the plant.

It's true that the research out of Harvard made waves when it first appeared in December 2015, but immediate criticisms emerged about a key aspect of the study. Rolling Stone was one of the first news outlets to look into the diacetyl scare, speaking to Boston University professor and physician Michael Siegel. Siegel addressed a popular objection to the research for eliding prior research of the same nature regarding tobacco cigarettes and diacetyl:

While studies like Harvard's are critical to fully understanding e-cigs, they too often have the opposite effect. Tobacco cigarettes, for instance, have also long been known to contain diacetyl — at levels over 100 times those found in electronic cigarettes — yet earlier tobacco studies found that even these levels were not enough to cause popcorn lung in smokers.

"The Harvard study is a perfect example of something that happens over and over," says Michael Siegel, a physician and professor at Boston University. "It creates a scare by omitting a key piece of information, undermining the public's appreciation of the severe hazards of tobacco smoking and leading to perverse public health outcomes." Siegel ... has spent much of his career fighting tobacco companies: testifying against them in court, pushing for smoking bans in bars and restaurants, advocating for policies making it illegal to market cigarettes to youth. When e-cigs first started gaining popularity, he was skeptical, believing them to be little more than a product designed to mask the dangers of smoking. Today, however, he has become one of the most outspoken supporters of the idea that e-cigs can succeed where the crusade against smoking has come up short. Given that the current e-cig market is dominated by habitual smokers, Siegel calls the U.S. government's reluctance to allow them to be pitched as a safer alternative "irresponsible."

Quantifying the "over 100 times" tobacco to e-cigarette comparison was difficult given the ranges cited in published research, but Siegel expounded upon his comments in an attendant blog post:

All conventional cigarettes produce tobacco smoke that contains diacetyl, and the levels of diacetyl in cigarettes are a lot higher than those produced by e-cigarettes.

Fujioka and Shibamoto conducted a study to measure the diacetyl exposure from active smoking. They found that the average diacetyl content of the cigarettes tested was 335.9 micrograms per cigarette. Assuming that a smoker consumes one pack per day (20 cigarettes), the average daily inhaled does of diacetyl associated with smoking is therefore 6718 micrograms.

Even if one looks at the maximum detected level of diacetyl in the electronic cigarettes vs. real cigarettes tested, the exposure of a smoker is much higher than that of a vaper.

The Harvard study held that the e-liquids tested ranged from zero to 239 micrograms in diacetyl content:

We found that diacetyl and 2,3-pentanedione exposures from cigarette smoking far exceed occupational exposures for most food/flavoring workers who smoke. This suggests that previous claims of a significant exposure-response relationship between diacetyl inhalation and respiratory disease in food/flavoring workers were confounded, because none of the investigations considered or quantified the non-occupational diacetyl exposure from cigarette smoke, yet all of the cohorts evaluated had considerable smoking histories. Further, because smoking has not been shown to be a risk factor for bronchiolitis obliterans, our findings are inconsistent with claims that diacetyl and/or 2,3-pentanedione exposure are risk factors for this disease.

Moreover, a separate study about occupational popcorn lung published in 2012 paradoxically held that non-smokers may be at higher risk for popcorn lung than smokers are:

Siegel,Michael.   "New Study Finds That Average Diacetyl Exposure from Vaping Is 750 Times Lower Than from Smoking."     The Rest of the Story: Tobacco News Analysis and Commentary.   10 December 2015.