Vice President Kamala Harris claimed in mid-February, "in many ways, we are starting from scratch." 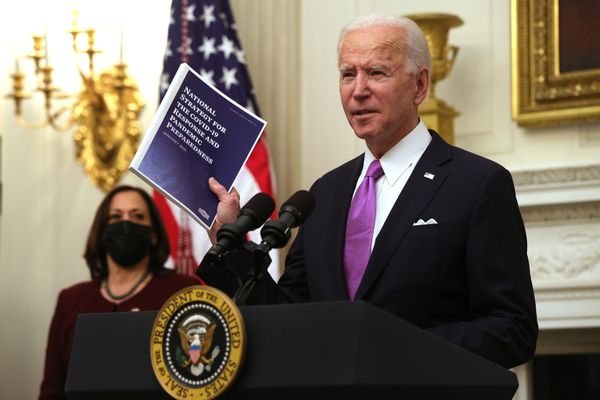 The Biden administration signed executive orders to create a new national plan to distribute COVID-19 vaccines after states and hospitals reported dwindling supplies and unclear guidelines for how to immunize Americans under Trump.

However, the Trump administration did have a plan in place for distributing COVID-19 vaccines, and Dr. Anthony Fauci, Biden's chief COVID-19 medical adviser, said the new administration would incorporate some aspects of that Trump-era strategy in its ongoing work.

The allegation undermined Trump's repeated claim that he had successfully created a process for delivering the immunizations and echoed comments by Biden before his inauguration in which he called the vaccine rollout "a dismal failure so far."

In mid-February 2021, Harris elaborated on what she described as "no national strategy" for getting Americans the shots prior to her and Biden's takeover of the White House. Speaking to Axios journalist Mike Allen, the conversation with the vice president went like this, according to a video recording of the interview:

Harris: I mean, the challenge, Mike, is that, you know, what I explained to the mayors: there's no stockpile. Right? It's, in many ways...

Allen: No stockpile of?

Harris: ...of vaccines. Right? So we're looking at this — there was no national strategy, or plan, for vaccinations. We were leaving it to the states and local leaders to try and figure it out, and so, in many ways, we are starting from scratch on something that's been raging for almost an entire year. [...]

By using the phrase "in many ways" while describing the administration's work ("in many ways, we are starting from scratch"), the vice president alleged in some aspects — but not all — she and Biden were picking up from where the Trump administration left off with distributing vaccines.

At least two unidentified people credited with direct knowledge of the new administration's work to curb the pandemic made similar comments to CNN reporter MJ Lee for a news story that published on Jan. 21. Under the headline, "Biden inheriting nonexistent coronavirus vaccine distribution plan and must start 'from scratch,' sources say," the story read:

'There is nothing for us to rework. We are going to have to build everything from scratch,' one source said.

Another source described the moment that it became clear the Biden administration would have to essentially start from 'square one" because there simply was no plan as: 'Wow, just further affirmation of complete incompetence.'

Considering the news media's framing of Harris' Axios interview, as well as the above-mentioned CNN report, the underlying claim was whether the Harris-Biden administration was forced to literally "start from scratch" with a comprehensive COVID-19 vaccine distribution plan because their predecessors had no working plan.

Before we determine the credibility of that accusation, let us note here: It was unclear why CNN did not name the sources cited in the above-mentioned report. CNN's media relations team did not respond to our request for an interview with Lee, but we will update this page if, or when, we receive a response from it. (It's common practice for journalists to grant anonymity to credible sources who fear repercussions, whether personally or professionally, for publicly speaking on sensitive matters. In such cases, however, journalists often explain to their audience why, or under what circumstances, they agreed to conceal a source's identity.) Also, while both sources alleged Biden was beginning from a point at which nothing had been completed yet, the literalness of their phrasing and the context under which they spoke to CNN were unclear.

It is important to note: Other media outlets including FOX News published stories that they claimed debunked "CNN's much-criticized report" that alleged failure by the Trump administration to develop a distribution plan. Authored by media reporter Joseph Wulfsohn, the Fox News story, for example, called the other news outlet an "anti-Trump network," implying that its reporting was an attempt to discredit the former president, violating journalistic principles of fairness and accuracy. The Fox News report transcribed comments by Dr. Anthony Fauci, the nation’s leading infectious-diseases expert, at a Jan. 21 news conference, according to a White House transcript and CSPAN's video of the event.

There, an NBC reporter asked Fauci if the new administration was "picking up where the Trump administration left off" with distributing vaccines to Americans or whether it was "starting from scratch." The reporter's exchange with Fauci, who's serving as Biden's chief COVID-19 medical adviser after working under Trump, went like this:

Fauci: No, I mean, we certainly are not starting from scratch because there is activity going on in the distribution.

But if you look at the plan that the President has put forth about the things that he’s going to do — namely, get community vaccine centers up, get pharmacies more involved; where appropriate, get the Defense Production Act involved, not only perhaps with getting more vaccine, but even the things you need to get a good vaccine program — for example, needles and syringes that might be more useful in that. So it’s taking what’s gone on, but amplifying it in a big way.

Journalist: President Biden said that what was left was “abysmal,” essentially. Is there anything actionable that you are taking from the previous administration to move it forward? [...] And is that delaying your efforts to get the vaccine? I mean, that’s the question that —

Fauci: No, I mean, we’re coming in with fresh ideas, but also some ideas that were not bad ideas with the, with the previous administration. You can’t say it was absolutely not usable at all. So we are continuing, but you’re going to see a real ramping-up of it.

In other words, Fauci refuted claims that the Biden administration was creating a plan from the ground up and said they would indeed use some aspects of Trump's vaccine distribution plan, while also incorporating "fresh ideas."

The initiative indeed delivered working immunizations in late 2020 and helped the first round of Americans get the shots, though it largely forced states to decide exactly how they wanted to distribute the immunizations. (Harris called attention to that system and framed it as ineffective in her Axios interview.) As a result, authorities and physicians across the country reported dwindling supplies and confusion over how they could vaccinate more people in Trump's final weeks, according to reputable news sources.

"There is a lack of a national communications plan — a lack of an understanding about what the plan is," Claire Hannan, executive director of the Association of Immunization Managers, told Politico on Jan. 17.

Dr. Eric Topol, head of the Scripps Research Translational Institute, told The Associated Press that the Trump administration did not order enough vaccine, which was then bought by other countries. Then, opening the line to senior citizens set people up for disappointment because there wasn’t enough vaccine, he said.

In response to those problems, Biden on Jan. 21 signed 10 executive orders to jump start his national strategy to prevent the spread of COVID-19, which is part of a broader plan totaling $1.9 trillion. According to The Associated Press the actions established a framework for the federal government to:

In sum, while it is true that the Biden administration promised to revamp the country's strategy for immunizing Americans, it is false to claim that it was literally "starting from scratch," or that the Trump administration had done nothing to develop a vaccine distribution plan, especially considering Fauci's assertions to the contrary.

This report was updated to include information from Vice President Harris' February 2021 interview with Axios journalist Mike Allen.