Did a Mom Have 'No Idea Why Her Vacation Photo Blew Up Until She Looked at The Background'?

Viral postings tell the tale of a missing woman, a ghostly apparition, and an abandoned car in the middle of nowhere. 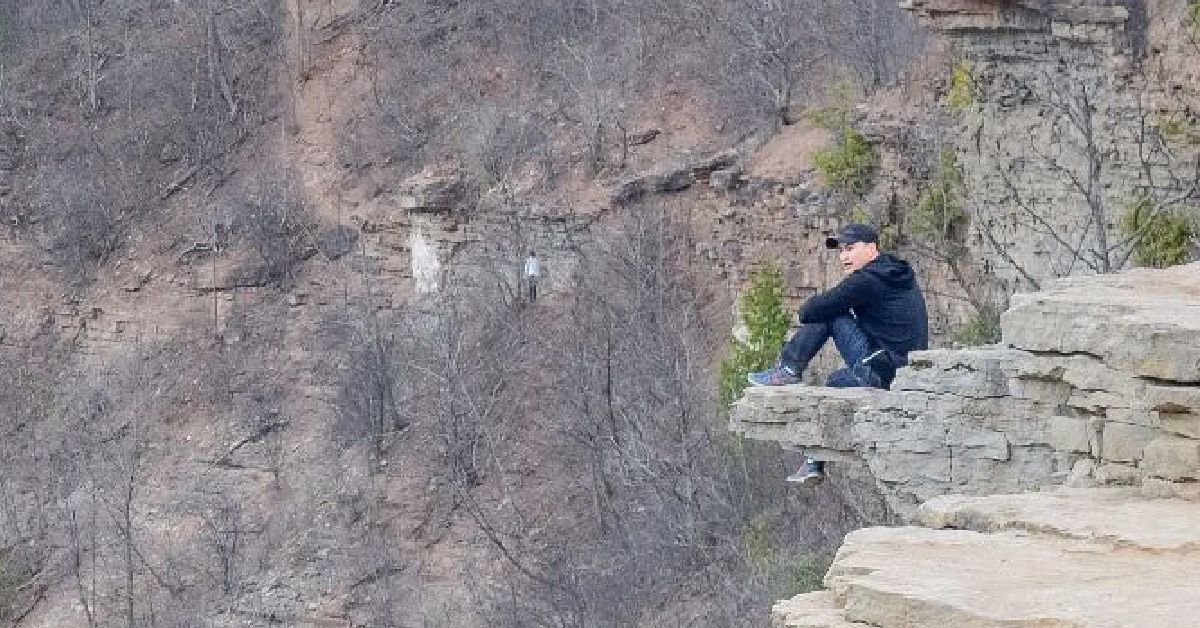 Claim:
After spotting a ghostly figure in a photo, the photographer returned to the location, found car keys that matched an abandoned vehicle, and learned that a woman had mysteriously disappeared nearby.
Rating:

The story was an intriguing one right from the start: A woman hiking with her boyfriend took his picture at a popular Canadian cliffside that overlooked the wilderness below. Later that night, she looked closely at the photograph and noticed a person -- perhaps even a ghost -- standing far in the background. She returned to the location where she snapped the picture and found a set of car keys. Walking back to the parking lot, she located a matching abandoned car. After she began her search for the missing driver, police told her about a woman who had gone missing in the area, and she found out through additional research that the missing woman's husband had an abusive past. When she later returned to the abandoned car, the missing woman emerged from the woods, alive and well.

It's quite the tale, but it's not true. Rather, it appears that elements from at least two different stories from 2016 and 2019 were combined to make one dramatic narrative that took on different forms in 2020: Upbeat News published "Hiker Finds Something Unexplainable in Photos from Her Trip," and Penguin MD posted a piece headlined, "Her Vacation Photo Went Viral and She Couldn't Figure Out Why."

Since at least June 2020, different versions of this story have been published across multiple viral content websites, touted by advertisements such as the following that promised quite the spooky story: "Mom Struggled to Understand Why Her Photo Went So Viral, Then Saw the Background." An alternate version of the advertisement read: "She Doesn't Understand Why Her Holiday Photo Went Viral Until She Took A Closer Look At It." We also saw: "She Was Surprised That It Went So Viral, but Then She Saw the Background." And: "Mom Has No Idea Why Vacation Photo Blew Up Until She Looked At The Background."

After readers clicked the ads to read the story, they were presented with a lengthy slideshow that loaded multiple ads per page, a phenomenon known as advertising arbitrage, where the goal is to make more money on the ads displayed during the slideshow than it costs to place the ads that drive readers to the story in the first place.

The publishers of such stories often use misleading advertisements to lure in readers, and the stories themselves are often untrue -- whether they're about Alex Trebek's net worth, an old camera from the Titanic, or a "heartbreaking" announcement from the Wendy's fast food restaurant chain.

Out of curiosity, we looked into the origins of this tall tale.

As noted above, viral content websites such as Upbeat News and Penguin MD published the narrative that a woman was hiking with her boyfriend at Dundas Peak in Hamilton, located in Ontario, Canada. She took the boyfriend's photograph on a cliffside and later noticed what appeared to be a ghost in the background of her picture. The hiker was named either Jennifer or Kim, depending on which version of the story was being read, and in one advertisement she was referred to as being a mom. The woman then returned to the same location to look for whatever had appeared in the background of her photograph and found car keys "dangling from the root down below" the cliff.

The story from Upbeat News said Jennifer and her friend walked back to the parking lot in the dark, where they found the matching abandoned car by pressing buttons on the key fob. The tale continued across multiple slideshow pages, claiming that Jennifer got in touch with the police and figured out that the woman who was missing had been married to an abusive husband. She later returned to the abandoned car, which was still sitting in the parking lot, and saw the missing woman walk out of the woods. The story continued to its surprising ending:

Jennifer couldn't believe it. The missing woman was standing in front of her, and she appeared to be searching for her keys. Jennifer got out of her car and handed them to her. She explained that she had, in fact, fled from her abusive husband and was trying to hide out here until she could come up with a plan ...

Jennifer gave the woman her keys back and told her she could stay with her and together they'd go back to the police station and put her case to rest once and for all. Sometimes it pays to listen to your gut feeling when you think something isn't as it seems...

That story is fictional, however, it appears to combine elements from two different stories, one from 2016 and another from 2019.

In 2016, Reddit user SlicedUpBeef posted about a strange shape he noticed in the background of a photograph shot by his friend's cousin, and although the post didn't even receive many upvotes or comments, it was still picked up by some online tabloids. The Reddit post referenced no one named Jennifer or Kim, nor did it include any mention of anyone's being a mother, boyfriend, or girlfriend. The photograph in full, taken at Dundas Peak, looked like this: The "ghost" figure is more visible on the left side of this zoomed version of the image: Unfortunately for ghost hunting enthusiasts, what looked like the outline of a person appeared to be nothing more than the same colors of white rock, tree branches, and dark shadows seen near the supposed apparition, although Reddit user tharchitect42 claimed maybe he was the shape in the background:

So that might be me. I've been to Dundas Peak and the surrounding area several times in the past two months. One of the times I went was about 5-6 weeks ago, the weather and lack of leaves looked the same as in your pic, and I was wearing a grey dress shirt and dark jeans. This pic is kind of what I imagine I would have looked like from far away.

I know you said it was inaccessible but there really are a lot of spots along that trail between the peak and Tew's Falls where you can go down closer to the edge. (Disclaimer: not the safest thing to do, especially if you're unsure or there's bad weather) At work right now but will comb through pics later and see if there's any relevant.

It's unclear if the image was edited. Reddit user tharchitect42 did not return to the Reddit post to present any additional evidence of his supposed presence in the picture. SlicedUpBeef hasn't posted on Reddit since 2019, and tharchitect42 has been inactive since 2017, and our attempts to reach out to both users were unsuccessful. Also, other photographs shot by SlicedUpBeef's friends did not reproduce the same shape in the background. Nonetheless, the photograph in question has been the subject of multiple viral YouTube videos.

Some Reddit users offered other theories on what might explain the ghostly image. The top comment from Runnah5555 read: "Given the scale that would be one tall and skinny lady. Has the WNBA reported any missing players?" Another user named justatemp-lar said that the shape in the background was "just holes in the rock," and that "the white piece looks similar to the white rock (snow?) to the left of it."

Reddit user markbellis responded, saying: "I think it's ice too - in the spring, water trickling out of the limestone forms patches of ice that melt and darken the rock, making the 'legs' and 'head' - the small patch that's the 'ghost' probably had melted when they took the second set of pictures, but there is a larger patch to the left that's still in both pictures."

Pareidolia was also mentioned. It's defined by Merriam-Webster as: "the tendency to perceive a specific, often meaningful image in a random or ambiguous visual pattern." One pareidolia example we covered in the past was what looked to be the shape of a wolf on a horse's coat.

Although the ghost in the image seems to have been inspired by a captivating Reddit post, the part of the story about car keys being found dangling from a root below the cliff and the discovery of an abandoned car appeared to come from a real news story.

On Nov. 21, 2019, Global News reported that 27-year-old Lovleen Dhawan went missing just three months before, after police believed she was "in the area of Tew Falls and Dundas Peak." Toronto News also reported that police were looking for two women who found Dhawan's car keys, so local authorities could investigate where the keys were first discovered:

Peel police investigators are looking to speak with two women who found car keys in the area of Webster Falls near the Village of Dundas on Thursday, Aug. 15.

These women, described as being in their 20s and wearing sports clothing, are considered key witnesses in a missing person investigation, according to police.

Police said they believe the hikers gave the keys to another group of people before leaving the area at approximately 4 p.m.

On Sept. 11, 2020, Toronto News reported that police still had not yet heard from the two women who found the car keys. As of late 2020, Lovleen Dhawan was still missing.

Two Stories in One

The viral content provider Upbeat News appeared to combine a somewhat spooky photograph with a real missing person report, with bits of fiction sprinkled on top. Meanwhile, Penguin MD's version of the story did not mention an abusive husband, nor did it end with a missing woman walking out of the woods.

While it was not definitively known what the shape in the background of the photograph was, we have rated this claim as false since it combined two completely unrelated happenings into a single viral story.