Three Sheets to the Wind: The Rum-Soaked Voyage of the USS Constitution

Naval lore has it that the crew of the USS Constitution ("Old Ironsides") consumed more than 250,000 gallons of liquor and not a single drop of water during a six-month voyage in the late 1700s. 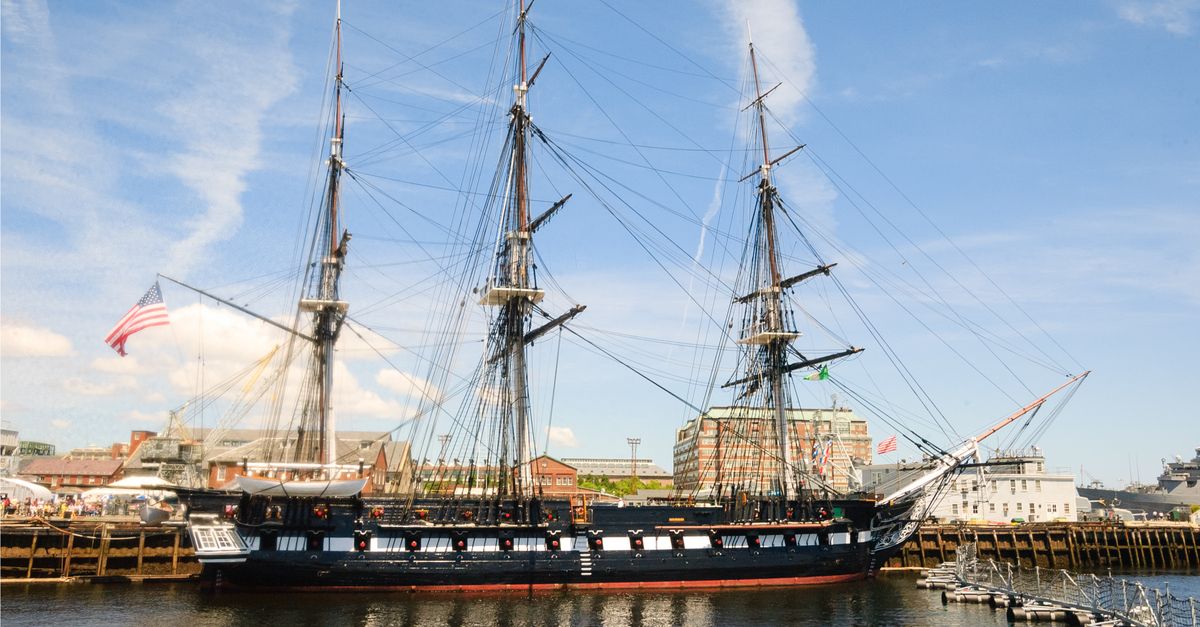 Claim:
The crew of the USS Constitution ("Old Ironsides") consumed more than 250,000 gallons of liquor and no water at all during a six-month voyage in 1798.
Rating:

America's oldest commissioned naval warship still afloat, a three-masted wooden frigate named the USS Constitution, has inspired a fanciful tale or two in its 220 years of service, not least the claim that it was nicknamed "Old Ironsides" because its hull proved to be impervious to British cannonballs during the War of 1812. (A contemporary account confirms that crewmen shouted "Huzzah! Her sides are made of iron!" after one enemy shot bounced off a plank and fell into the water, but many more broke through the hull and inflicted damage, according to the same source.)

Another cherished anecdote chronicles a six-month voyage during which, supposedly, the officers and crew of the USS Constitution single-handedly consumed more than 252,000 gallons of liquor (roughly three gallons a day per sailor), and not a single drop of water. Some of the details of the story vary from teller to teller, but the punchline is always the same.

Here, for example, is a version imparted in a speech by then-U.S. Secretary of the Navy John H. Dalton in 1997:

The following is an account of USS Constitution's famous war cruise during the War of 1812. In August, Constitution set sail from Boston with 475 officers and men — about the same complement as one of our Aegis cruisers today — and the following supplies:

Upon arriving in Jamaica on 6 October, she took on:

She then headed for the Azores, where she took on

On 13 November she set sail for England. In the ensuing days, she defeated 5 British men of war and sank 12 British merchant ships, salvaging only their rum.

By 27 January, her powder and shot were exhausted. Nonetheless, she made a raid on the Firth of Clyde. Her landing party captured a whiskey distillery and transferred 40,000 gallons of scotch aboard. She then headed home.

Constitution made port at Boston harbor on the 23rd of February with no cannon shot, no powder, no food, no rum, no whiskey, no wine — but with 48,000 gallons of stagnant water!

You are permitted to scoff. Despite their age-old reputation for heroic drinking, no seamen (or any other humans) could have guzzled that much booze and lived. Not counting the rum confiscated from British ships (an unknown quantity), the volume of liquor allegedly consumed in six months by the Constitution's crew of 475 totaled 252,700 gallons, or 2.94 gallons per individual per day. Assuming one remained conscious long enough to consume that much in a 24-hour period (which is doubtful), one would not likely survive the experience, much less repeat it day after day, week after week, for six months. The human body can only tolerate so much alcohol.

To be sure, the Constitution would have sailed with a sizable store of rum on board. Like their British counterparts, American seamen received a daily ration of "grog" (rum, or sometimes whiskey, mixed with water), which had been settled upon in the mid-1700s as the most practical alternative to plain water (which tended to spoil on long voyages, mainly due to impurities in the wooden casks in which it was stored), beer and wine (also prone to spoilage), or straight rum (prone to causing behavioral issues). However, the grog wasn't dispensed willy-nilly, but rather in carefully measured increments prescribed by law, as the USS Constitution Museum explains:

The actual regulation Navy ration included ½ pint of spirits each day, which works out to 8 oz. or 6.4 oz. of ethyl alcohol. This is more than enough to inebriate a man, but the ration was served as “grog,” rum mixed with one, two, or three parts water. In addition, the men received their ration in two portions, one at noon and another at about 4:30 in the afternoon. It made the men happy, but prevented them from falling down drunk.

So, although the ship would have been stocked with rum, the amount would have been only a fraction of the 79,400 gallons claimed. An actual list of supplies loaded aboard the Constitution prior to a 1799 voyage, for example, included 37,500 gallons of water (similar to the amount claimed in the story), but only 3,000 gallons of rum. If that was insufficient to last the voyage, it wasn't unheard of (though it was unpopular) to cut grog rations as necessary.

None of which is meant to suggest that the quantity of rum is the only credibility issue to be found in this story, which, in fact, is rife with historical inaccuracies.

For one, given the multiplicity of variants in circulation, the story has been set in at least three different time periods. The version relayed by Dalton claims it took place during the War of 1812; another says the voyage commenced in 1798; yet another, relayed by National Park Service curator Harold Peterson and quoted in the book Oceanographic Ships, Fore and Aft, stipulates the date of departure as 23 August 1779:

On 6 October, she made Jamaica, took on 826 pounds of flour and 68,300 gallons of rum. Three weeks later, Constitution reached the Azores, where she provisioned with 550 pounds of beef and 2,300 gallons of Portuguese wine.

On 18 November, she set sail for England where her crew captured and scuttled 12 English merchant vessels and took aboard their rum. By this time Constitution had run out of shot. Nevertheless, she made her way unarmed up the Firth of Clyde for a night raid. Here, her landing party captured a whiskey distillery, transferred 13,000 gallons aboard and headed for home.

On 20 February 1780, the Constitution arrived in Boston with no cannon shot, no food, no powder, no rum and no whiskey. She did, however, still carry her crew of 475 officers and men and 48,600 gallons of water.

The math is quite enlightening: Length of cruise: 181 days. Booze consumption: 1.26 gallons per man per day (this does NOT include the unknown quantity of rum captured from the 12 English merchant vessels in November).

Naval historians say that the re-enlistment rate from this cruise was 92%.

Here's why this version doesn't hold water: The USS Constitution couldn't have sailed in 1779 (during the Revolutionary War), given that they weren't finished building it until 1797.

It could have sailed (and, in fact, did sail) in 1798, but its mission would not have been "to destroy and harass English shipping," given that the U.S. and Britain were not at war. What we do know about the Constitution's 1798 voyage is summarized thus by the USS Constitution Museum:

Constitution sailed from Boston on the evening of July 22, 1798, with orders to cruise between Cape Henry, Virginia, and Charleston, South Carolina. On October 6, the ship was at Hampton Roads, Virginia, very far away from Jamaica. (Jamaica, by the way, was the headquarters of the British West India squadron, a strange place to steer for if one were at war with them). By November 12, Constitution lay at anchor in Boston Harbor, having just returned from a largely uninteresting first cruise. She was still there on the 18th, but finally sailed again for the Caribbean on December 29. On January 26, 1799 she was heading for Prince Rupert’s Bay, Dominica to repair the injured foremast — not launching a foray into the Firth of Clyde. On February 20 Capt. Nicholson and his crew were patrolling the waters off Guadeloupe, not enjoying a happy homecoming.

The Constitution saw plenty of action during the War of 1812 (1812-1815), of course, but the timeline of its actual exploits during that period doesn't match up with any of the events in the story.

We therefore share the conclusion of the USS Constitution Museum (and others), to wit that the fabled rum-soaked voyage of the Constitution never took place. The story was fabricated, unquestionably, though we can't say with any certainty by whom, or precisely when. It does appear to be of fairly recent origin, however. The museum notes that the earliest variant discovered by its researchers is Peterson's version, (though they also note that Peterson was a careful scholar and unlikely to have invented the story himself). The earliest variant we've found besides Peterson's dates from 1959, having appeared in Volume 74, page 112 of The Reader's Digest that year.

Nelson, Stewart B.   Oceanographic Ships, Fore and Aft.    Washington, DC: Office of the Oceanographer of the Navy, 1971.