The Secret Service appears to have a policy of screening packages intended for its protectees, but this was not proof of a "false flag" operation. 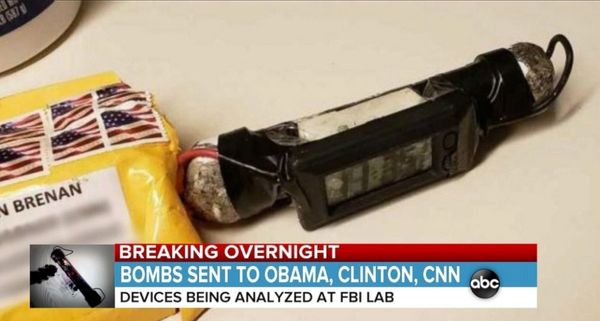 Claim:
News media claims of bombs sent by mail to the Clintons and Obamas were false because USPS doesn't deliver mail to persons under Secret Service protection.
Rating:

The Secret Service appears to have a policy of screening all packages addressed to persons under their protection, meaning postal workers may not deliver all mail directly to such individuals.

Contrary to the claims of some social media users, news articles overwhelmingly did not mislead the public about the delivery of explosive devices to the homes of Barack Obama and Hillary Clinton and therefore were not conveying misinformation that might provide evidence the mail bomb campaign was a hoax or a "false flag" operation.

Law enforcement officials said the packages contained suspected explosive devices, although none of them detonated or caused any physical injury. The episode prompted widespread concern and increased political tensions in the lead-up to the 6 November midterm elections, especially after authorities in Florida arrested 56-year-old Cesar Sayoc, a supporter of President Donald Trump, in connection with the packages.

The mailings also engendered conspiracy theories, chief among them the notion that the sending of the suspicious packages, the contents of many of which had the appearance of pipe bombs, was a "false flag" operation, orchestrated by liberals to stoke outrage against President Donald Trump on account of his past violent rhetoric.

Against this background, a viral meme emerged on 24 October which some promoters cited as evidence that the "pipe bomb" mailings were a politically-motivated hoax rather than a genuine effort to harm or intimidate perceived liberal Democrats:

A retired postal worker just called in to the Roger and JP Show, and stated the following:

That is all. Carry on.

This message reappeared on multiple different Facebook accounts, in many cases prompting comments which held that the pipe bombs were a hoax or news reports about the mail terror campaign were fake. The logic of this argument went as follows:

On 22 October, a suspected explosive device was found in a package in the mailbox outside the suburban New York home of George Soros, a billionaire financier and philanthropist who is a frequent target of right-wing attacks and misinformation for his funding of liberal and progressive causes.

Later, federal officials told the New York Times that the package was likely hand-delivered rather than being sent through the mail.

Two days later, the U.S. Secret Service intercepted two potential explosive devices which had been addressed to the upstate New York home of Hillary and Bill Clinton, and the Washington, D.C., home of the Obama family, respectively. In a statement about those mailings, the Secret Service wrote:

The packages were immediately identified during routine mail screening procedures as potential explosive devices and were appropriately handled as such. Both packages were intercepted prior to being delivered to their intended location. The protectees did not receive the packages nor were they at risk of receiving them.

So it's worth noting that the misinformation the meme sought to point out was largely absent from news reports, which were overwhelmingly careful to point out, even in headlines, that the suspicious packages had never made it to the homes of the Obamas or Clintons.

The Secret Service does appear to have a policy of not allowing the USPS or other companies to directly deliver mail to anyone who is under the agency's protection, such as the Obama and Clinton families, though we were unable to confirm this definitively.

The Secret Service's press release on the packages referred to "routine mail screening procedures" and mentioned that neither the Obamas nor Clintons were "at risk of receiving them." This information strongly suggested that postal workers do not, as a matter of policy, directly deliver mail addressed to Secret Service protectees.

We asked the agency to confirm this point, but a spokesperson told us: "For operational security reasons, the Secret Service does not discuss specifically nor in general terms the means and methods we utilize to carry out our protective responsibilities."

Likewise, a spokesperson for USPS responded to our queries by writing: "We are not able to address your specific questions." We also asked UPS and FedEx to clarify whether their employees ever directly deliver mail to Secret Service protectees, and a spokesperson for the former told us that "UPS has layered security measures, but we do not disclose them to maintain their effectiveness." We did not receive a substantive response from FedEx.

This does not mean that reporting about the packages, in general, was false, or that the episode constituted a hoax or a "false flag" operation. In a press conference on 26 October, Federal Bureau of Investigation Director Christopher Wray emphasized that the 13 devices sent to various intended recipients were "not hoax devices":

We can confirm that 13 IEDs [improvised explosive devices] were sent to various individuals across the country. Each device consisted of roughly six inches of PVC pipe, a small clock, a battery, some wiring and what is known as "energetic material," which is essentially potential explosives and material that give off heat and energy through a reaction to heat, shock or friction. Though we're still analyzing the devices in our laboratory, these are not hoax devices.

"These are not hoax devices," FBI Director Christopher Wray said after announcing that 13 improvised explosive devices were sent to individuals around the country https://t.co/acrCVdqa3i pic.twitter.com/CiNSCzlpXC

As of 26 October, suspect Cesar Sayoc, who frequently posted online about his support for President Trump and distaste for Democrats, CNN and George Soros, had not given a public explanation for his alleged actions. However, no evidence supports the theory that the mail bomb campaign was part of a hoax or false flag conspiracy intended to stoke outrage among opponents of President Trump and the Republican party, to the benefit of Democrats in the mideterm elections.

The viral meme which quotes a former USPS worker has been presented on social media as proof that the news media was deliberately misleading the public about the delivery of packages to the homes of the Obamas and Clintons, and therefore evidence that the entire episode constituted a "false flag" operation. But this was not the case, not least because the vast majority of news articles accurately reported the fact that the Secret Service intercepted the explosive devices before they arrived at their intended destinations.