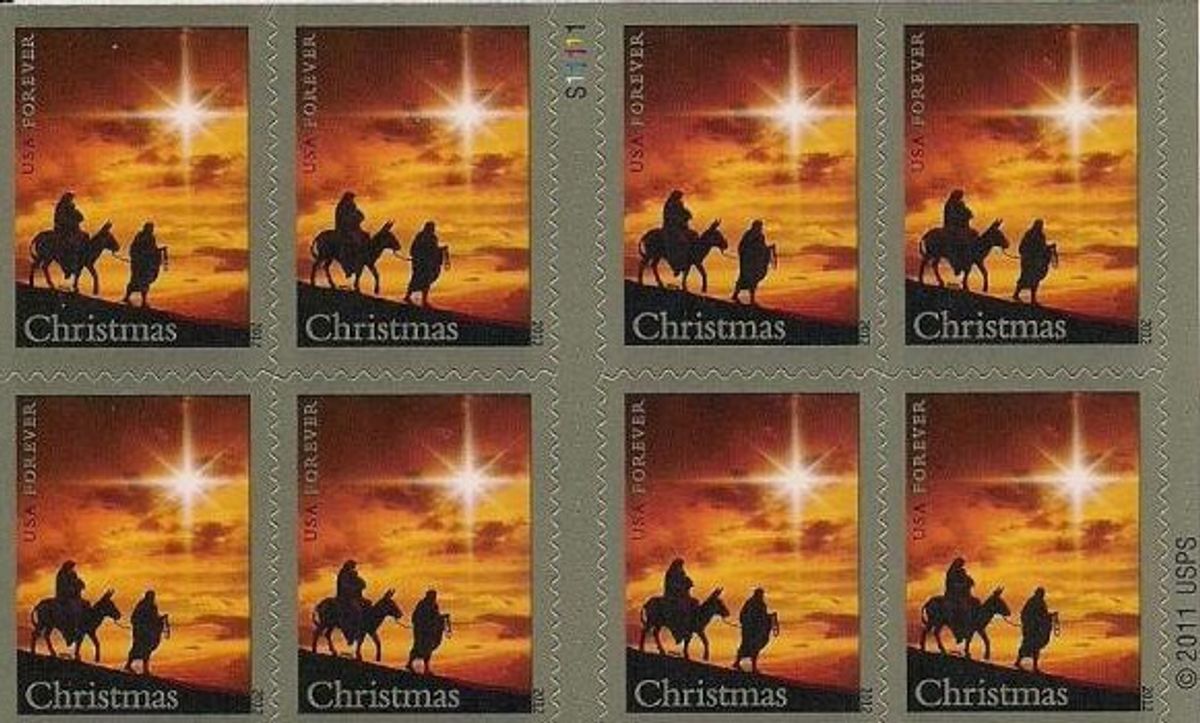 In November 2015, a Facebook post claiming that the United States Postal Service would stop selling religious-themed Christmas stamps in 2016 started to go viral: The Post Office said to please spread the word...so I am. I went to purchase my stamps for Christmas cards this year, she informed me this would be the last year we would ever be able to purchase religious stamps. The government has now made it to where the United States Post Office will no longer be allowed to sale religious stamps. You can buy snowflakes or ornaments or things of that nature but never again Jesus, or anything religious. This makes me upset. Our country is taking God out of everything...without Jesus there would be no Christmas! Red cups or stamps don't prove what my heart feels, but at what point will we defend our Lord? It's so commercialized now-I'm very disappointed. Hope you will spread the word and write USPS!!

The above-quoted Facebook post echoed an article entitled "Is the Postal Service Declaring War on Religion?" published by The Daily Caller on 9 September 2015:

Don't expect new Christmas stamps this year because for the first time in decades the U.S. Postal Service won't issue a new stamp depicting any Christian religious figure or symbol. No baby Jesus. No Mary. And none of the three wise men.

Those of other faiths will be disappointed, too. There will be no printing of new stamps for the Jewish holiday of Chanukah, the African-American celebration of Kwanzaa or the Muslim Ramadan holiday of EID, the Daily Caller News Foundation has learned.

The Daily Caller went on to blame a lack of new Christmas stamps on the Obama administration:


However, it has been uneven during Obama's tenure, with the Madonna or the Nativity scene appearing in only two of his last six years. The last Madonna stamp was in 2011.

The USPS postal stamps archive, however, shows that a Madonna stamp was released as recently as 2013; and religious Christmas stamps featuring Nativity scenes, Christmas Magi, and Madonnas by both Raphael and Sassoferrato were released in four (not two) of the last six years: The key issue here is the use of the word "new." The USPS typically issues two sets of Christmas stamps every holiday season, one that is religiously themed and one that features secular Christmas and winter season symbols (e.g., snowmen, candy canes, Christmas trees). However, due to a large backlog of the former, the USPS is only issuing a new non-religious Christmas stamp set in 2015 (commemorating the 50th anniversary of A Charlie Brown Christmas) and will be using stock left over from the previous year to service customers who wish to purchase religiously themed Christmas stamps.

USPS spokesperson Mark Saunders directly addressed the claims made by the Daily Caller back in September 2015 by noting that the USPS didn't publish a new religious Christmas stamp design for the 2015 season because there were still "more than a half billion religious-themed holiday stamps" in stock:

Your Sept. 10 article "Ìs the Postal Service Declaring War on Religion?" is incorrect and misleads your readers into thinking Post Offices will not be offering religious-themed holiday stamps this year. Nothing could be further from the truth. Allow me to set the record straight.

We have more than a half billion religious-themed holiday stamps in inventory and based on prior year's purchases, that's more than twice sold during a typical Holiday season.

Our decision to print select holiday-themed stamps every other year is a business decision based on supply and demand while serving the needs of our customers. Moreover, we have found that the popularity of Holiday Forever stamps — which are good for mailing a one-ounce letter anytime in the future regardless of price changes — result in more stamps purchased at a time.

Evidently the story idea about the "Postal Service Declaring a War on Religion" began when your reporter visited a Post Office and found that it had no religious-themed stamps available. Postmasters have the ability to order holiday stamps, but as most customers wait until after Thanksgiving to mail their greeting cards, Postmasters typically order these stamps in late September or early October.

Customers can purchase stamps at Post Offices or online at usps.com/shop.

The Postal Service has a long standing history of celebrating the religions of the world on postage stamps.

So, while the United States Postal Service opted to issue new Charlie Brown Christmas stamps in 2015 but not new religiously-themed postage stamps, several varieties of the latter will still be available for purchase by customers this year.