The photo was shared by the Museum of Jewish Heritage in Manhattan with a message congratulating the team for its World Cup win. 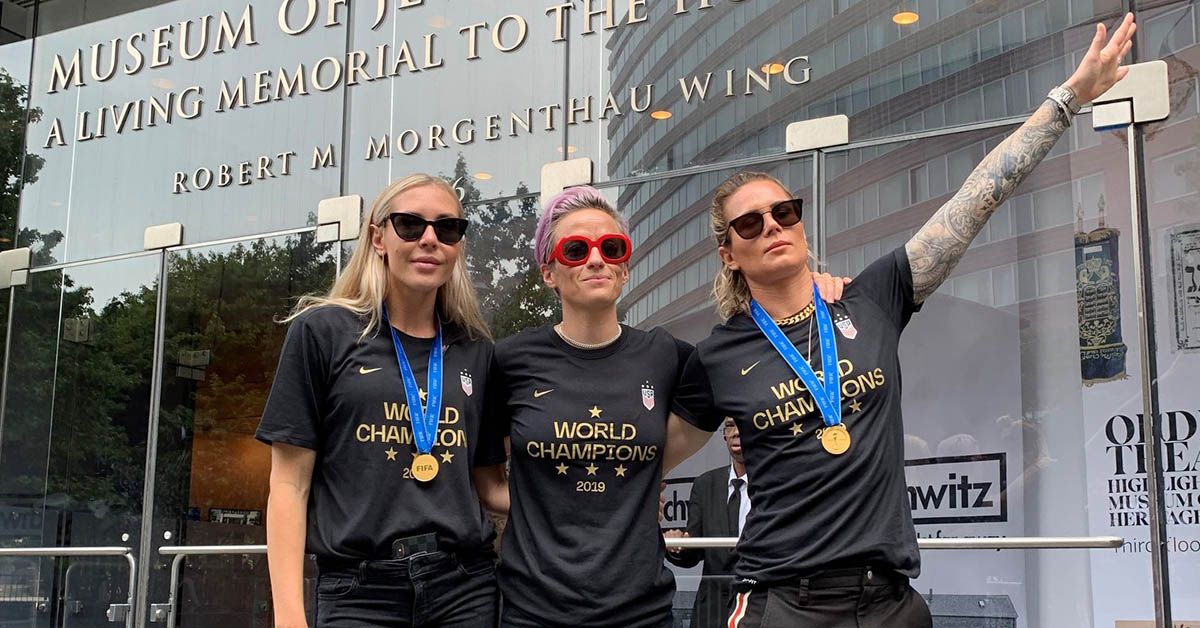 A photograph supposedly showing three members of the U.S. Women's Soccer Team — Allie Long, Megan Rapinoe, and Ashlyn Harris — standing in front of a Holocaust memorial museum was circulated on social media in July 2019 along with messages stating that one of the women was giving a Nazi salute: "Womens soccer team member gave a Nazi salute in front of the Holocaust Museum. Who recruited these players? The KKK?" This is a genuine photograph. However, the women on the far right in the image, goal keeper Ashlyn Harris, is not giving the Nazi salute.

For starters, the Nazi salute is delivered by raising "an outstretched right arm with the palm down," according to the Anti-Defamation League. That isn't the pose struck here by Harris, who is raising her left arm, not her right.

Harris' gesture is more akin to the celebratory pose struck by her teammate Rapinoe after one of her many World Cup tournament goals: More importantly, this photograph appears to have originated from the social media pages of the pictured museum. On July 10, 2019, approximately two days before the "Nazi salute" claim was attached to this image, the Museum of Jewish Heritage in Lower Manhattan posted the photograph along with a message stating how happy the museum was to be a part of the team's World Cup victory celebration:

It's been an incredible morning at the Museum. We're so happy to have been part of the pre-Ticker Tape parade and we're so proud of our world champion @USWNT.

Harris was not giving a Nazi salute or being disrespectful in front of the Holocaust museum. In fact, this museum shared the photograph along with a celebratory message regarding the U.S. Women's Soccer Team's World Cup win.