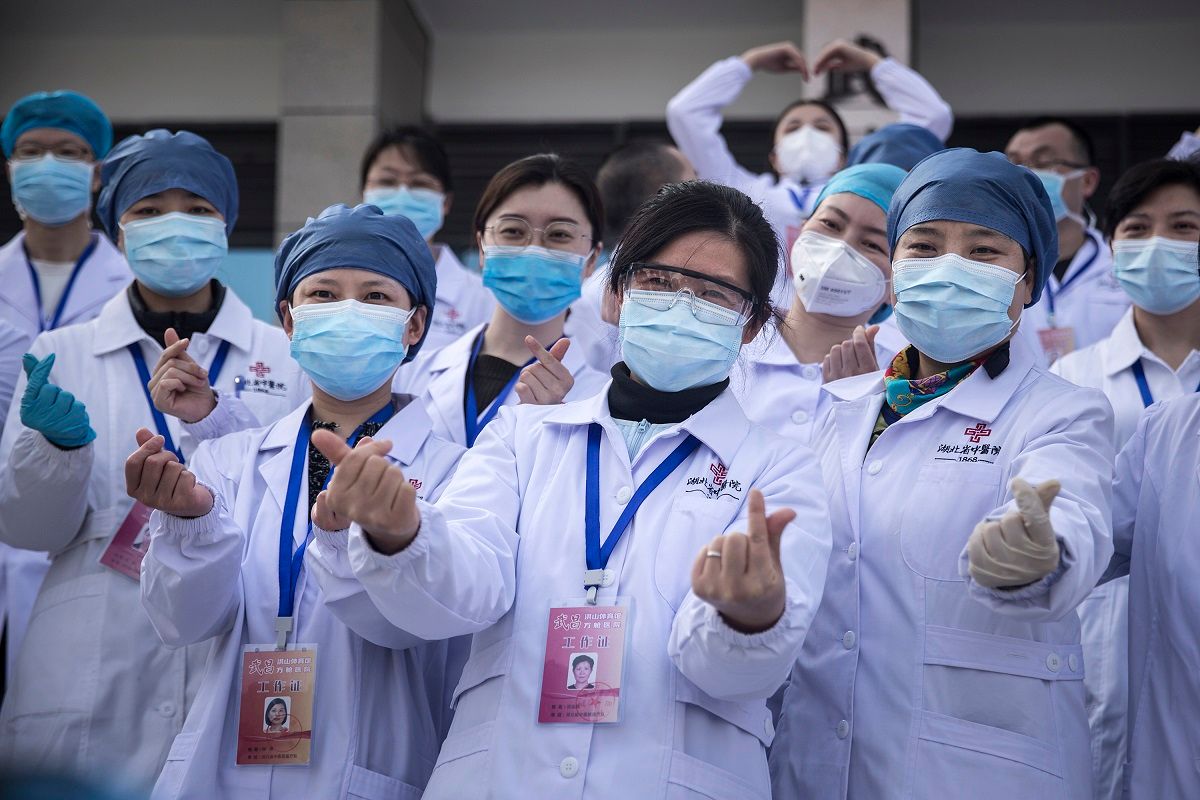 Claim:
The U.S. facilitated the sending of nearly 17.8 tons of donated medical supplies to China to combat the spread of the novel coronavirus in early 2020.
Rating:

During the COVID-19 coronavirus disease pandemic in March 2020, social media users began sharing a tweet ostensibly posted by U.S. Rep. Maxine Waters (D-CA) that castigated U.S. President Donald Trump for supposedly having sent 18 tons of personal protective equipment (PPE) to China while ignoring warnings and calling COVID-19 concerns a "hoax." Readers wanted to know both if Waters had actually tweeted those words, and whether the content of that tweet was true: It is also true that on Feb. 7, 2020, while critics contended that the Trump administration was doing relatively little to prepare for the coming pandemic in the U.S., the State Department announced it had facilitated "the transportation of nearly 17.8 tons of donated medical supplies to the Chinese people, including masks, gowns, gauze, respirators, and other vital materials" in order to help "contain and combat the novel coronavirus":

This week the State Department has facilitated the transportation of nearly 17.8 tons of donated medical supplies to the Chinese people, including masks, gowns, gauze, respirators, and other vital materials. These donations are a testament to the generosity of the American people.

Today, the United States government is announcing it is prepared to spend up to $100 million in existing funds to assist China and other impacted countries, both directly and through multilateral organizations, to contain and combat the novel coronavirus. This commitment – along with the hundreds of millions generously donated by the American private sector – demonstrates strong U.S. leadership in response to the outbreak.

This assistance only adds to what the United States has done to strengthen health security programs around the world. For the last 20 years, the United States through USAID has invested over one billion dollars to strengthen the capacity of more than 25 countries to prevent, detect, and respond to existing and emerging infectious disease threats. Since 2015, under our commitment to the Global Health Security Agenda (GHSA), this support has helped improve surveillance and laboratory systems, risk communication, outbreak response, and address the rising threat of anti-microbial resistance.

The United States is and will remain the world’s most generous donor. We encourage the rest of the world to match our commitment. Working together, we can have a profound impact to contain this growing threat.

This same topic was also the subject of a CNN editorial published on the same day as Waters' tweet, which criticized Trump for allowing the transfer of PPE to China even after at least a dozen cases of COVID-19 had been discovered in the U.S.:

Concerns about a dwindling supply of PPE are not new. Back on February 7, the World Health Organization sounded alarm bells about "the limited stock of PPE," noting demand was 100 times higher than normal for this equipment.

Yet the same day as the WHO warning, the Trump administration announced that it was transporting to China nearly 17.8 tons (more than 35,000 pounds) of "masks, gowns, gauze, respirators, and other vital materials." As Secretary of State Mike Pompeo noted in the press release announcing this shipment, "These donations are a testament to the generosity of the American people."

Americans indeed are a generous people. We want to help those in need. And at the time these medical supplies were shipped, more than 28,000 people in China were infected with nearly 600 deaths attributed to the virus. But how could Trump allow tons of vital medical equipment Americans to be transported to another country in February if, as he has claimed since January, he fully understood the risk the United States was facing from the virus.

As a reminder, the first known case of coronavirus case on US soil was confirmed by the US Centers for Disease Control and Prevention on January 21, 2020.

The next day, Trump was asked about the virus while attending the World Economic Forum annual meeting in Davos. CNBC anchor Joe Kernen asked the President: "The CDC has identified a case of coronavirus in Washington state ... have you been briefed by the CDC?" to which Trump responded, "I have." Kernen continued, "Are there worries about a pandemic at this point?" Trump declared: "No. Not at all. And — we're — we have it totally under control. It's one person coming in from China, and we have it under control. It's — going to be just fine."

As we covered in a separate article, it is not true that Trump literally dismissed the coronavirus itself as "a hoax." He did, however, liken the Democrats' criticism of his administration's response to the new coronavirus outbreak to their efforts to impeach him, saying "this is their new hoax" — while seemingly downplaying the potential severity of the outbreak by comparing it to the common flu and claiming the press was "in hysteria mode":

Now the Democrats are politicizing the coronavirus. You know that, right? Coronavirus. They’re politicizing it. We did one of the great jobs. You say, ‘How’s President Trump doing?’ They go, ‘Oh, not good, not good.’ They have no clue. They don’t have any clue. They can’t even count their votes in Iowa, they can’t even count. No they can’t. They can’t count their votes.

One of my people came up to me and said, ‘Mr. President, they tried to beat you on Russia, Russia, Russia. That didn’t work out too well. They couldn’t do it. They tried the impeachment hoax. That was on a perfect conversation. They tried anything, they tried it over and over, they’ve been doing it since you got in. It’s all turning, they lost, it’s all turning. Think of it. Think of it. And this is their new hoax. But you know, we did something that’s been pretty amazing. We’re 15 people [cases of coronavirus infection] in this massive country. And because of the fact that we went early, we went early, we could have had a lot more than that.

Some defenders have argued that the Trump administration's cooperation in sending donated supplies to the part of the world with the largest number of coronavirus cases at the time (China) was the most effective way of combating the outbreak, while critics have maintained that those supplies should have been kept on hand for use during the inevitable spread of the coronavirus to America. Given that some of the supplies had been donated by the "American private sector," it's unclear what would have happened to them had the U.S. State Department declined to facilitate their transportation to China, and whether that action ultimately saved or cost more lives in the U.S. is not possible to determine at this point. But for what it's worth, the Canadian government was likewise criticized for sending supplies to China for the same reasons:

Canada’s department of Global Affairs shipped 16 tonnes of personal protective equipment to China [in February] to help Beijing fight the novel coronavirus, an effort that it undertook even after the World Health Organization had warned countries to prepare for possible cases.

Critics are questioning the wisdom of exporting gear overseas just weeks before it was sorely needed in Canada. The Canadian government, however, says the shipment was an effort to collaborate with China in the fight against COVID-19, the disease caused by the coronavirus.

Amir Attaran, a professor at University of Ottawa’s school of epidemiology and public health and its faculty of law, said he was surprised to learn Global Affairs shipped personal protective equipment (PPE) to China.

“It was absolutely certain in early February that we would need this equipment,” he said. "This decision went beyond altruism into high negligence and incompetence because Canada did not, and does not, have surplus equipment to spare.”

Adam Austen, deputy director of communications for Mr. Champagne, said Canada’s shipment to China was an effort to co-operate in the fight against the virus.

“Global pandemics require global co-operation. After all, pandemics know no borders. Co-operation is vital to ensuring the health and safety of people around the world. This includes protecting people here in Canada, as support of this kind can help to slow the spread of the virus,” Mr. Austen said.

Obeidallah, Dean.   "Trump Administration Sent Protective Medical Gear to China While He Minimized the Virus Threat to US."     CNN.   30 March 2020.