Does the U.S. Have Millions More Registered Voters Than Eligible Adults?

A persistent claim about widespread voter fraud is based on problematic tallies of registered and eligible voters. 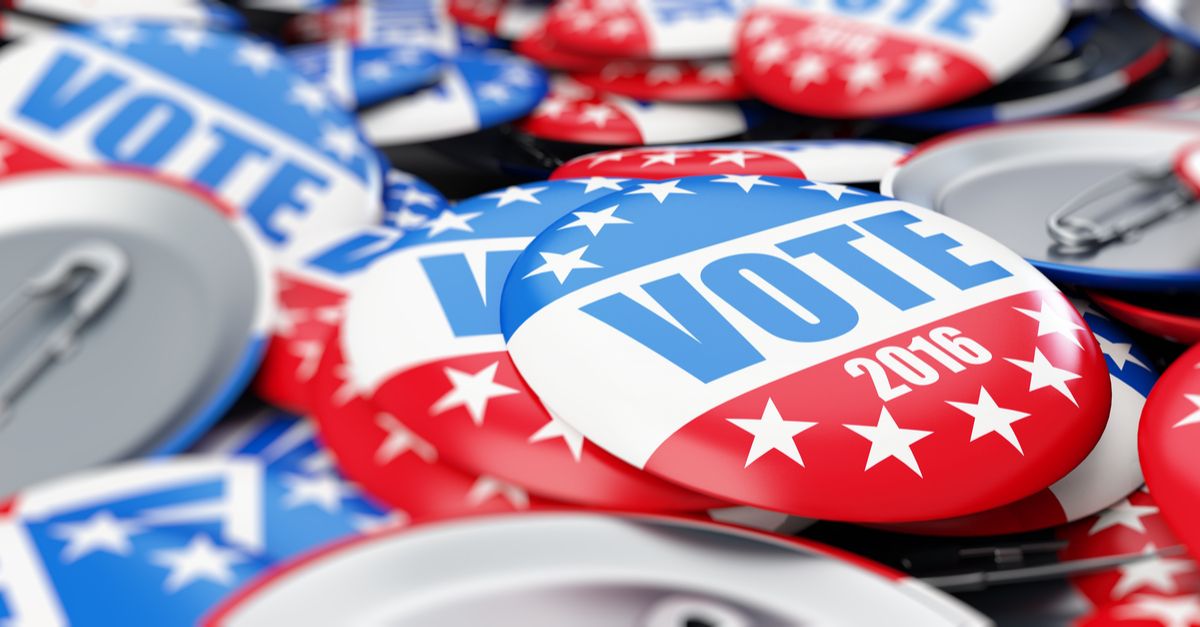 Estimates of voter rolls in the counties of some states, including California, tally more registered voters than eligible adults.

Such estimates do not encompass the entire U.S., are based on questionable methodologies, and may include voters who are listed on state rolls as "inactive."

In mid-April 2018, a months-old claim that the U.S. had 3.5 million more registered voters than "live adults" reappeared on social media. That claim appears to have originated with a National Review article of 11 August 2017 that built on information compiled by Judicial Watch's Election Integrity Project:

Some 3.5 million more people are registered to vote in the U.S. than are alive among America’s adult citizens. Such staggering inaccuracy is an engraved invitation to voter fraud.

My tabulation of Judicial Watch’s state-by-state results yielded 462 counties where the registration rate exceeded 100 percent. There were 3,551,760 more people registered to vote than adult U.S. citizens who inhabit these counties.

These 462 counties (18.5 percent of the 2,500 studied) exhibit this ghost-voter problem. These range from 101 percent registration in Delaware’s New Castle County to New Mexico’s Harding County, where there are 62 percent more registered voters than living, breathing adult citizens — or a 162 percent registration rate.

Even if these numbers are assumed to be accurate, presenting them as definitively demonstrating that "some 3.5 million more people are registered to vote in the U.S. than are alive among America’s adult citizens" is a questionable and problematic claim, given that the information was compiled from only 462 counties in 38 states, yet the entire U.S. comprises over 3,000 counties in fifty states. Many of those other counties might well have substantially fewer registered voters on their rolls than adult residents who are eligible to vote.

Another major issue with such a claim is the potential inclusion of "inactive" voters among the tallies of registered voters, a matter that was publicized in a 1 August 2017 letter Judicial Watch sent to California Secretary of State Alex Padilla threatening to sue unless the state and eleven of its counties produced voter records to them. According to Judicial Watch, their own analysis of U.S. Census data and voter registration records indicated those eleven counties included numbers of registered voters exceeding the numbers of adults eligible to vote in those counties.

In December 2017, Judicial Watch made good on their threat, initiating litigation that is currently in progress in U.S. District Court, Central District of California. The lawsuit accuses California and multiple jurisdictions of violating the National Voter Registration Act of 1993 (NVRA) by failing to maintain updated voter registration rolls.

Stories based on Judicial Watch's letter initially made Internet waves in late summer 2017 via right-leaning blogs and Kremlin propaganda networks. In April 2018, another version of the claim went viral in the form of an editorial published months ago by the financial publication Investors Business Daily:

California, for instance, has 11 counties with more registered voters than actual voters. Perhaps not surprisingly — it is deep-Blue State California, after all — 10 of those counties voted heavily for Hillary Clinton.

Los Angeles County, whose more than 10 million people make it the nation's most populous county, had 12% more registered voters than live ones, some 707,475 votes. That's a huge number of possible votes in an election.

However, as multiple news organizations have already pointed out, the accusation of voter registration irregularities in California rests on the manner in which Judicial Watch counted California voters, combining active and inactive voters on a county-by-county basis:

Judicial Watch’s claim rests on its inclusion of “inactive voters” – people who have been removed from active rolls after a mail ballot, voter guide or other official document was returned as undeliverable – usually as a result of moving. They aren’t reflected in turnout tallies or signature-gathering requirements, don’t receive election materials, and are ignored by campaigns.

Bob Popper, director of Judicial Watch’s election integrity project, said California has failed to report its inactive voter data to the federal government as required by the National Voter Registration Act. Counties should be doing more to cull their inactive voter lists, he said.

“What we identified is a red flag, a sign of smoke,” he said, saying people could be voting multiple times or in more than one state.

In fact, California did report the data. Its inactive voter tally of 5,065,746 at the time of last fall’s election is part of the most recent election administration and voting survey published by the federal Election Assistance Commission.

The consideration of inactive voters is a key issue here. Judicial Watch maintains that registrations listed on state rolls as "inactive" are "vulnerable to abuse" by "voters who plan to fraudulently double-vote in two different jurisdictions on the same election day," or by third parties "because a voter who has moved to a different state is unlikely to monitor the use of or communications concerning an old registration."

However, California's National Voter Registration Act (NVRA) regulations state that although inactive voters remain on the rolls as registered voters who are eligible to vote, they do not receive "mailed election materials" (including mail-in ballots) and must "confirm residency at the polling place" in person in order to vote — standards that would severely limit or eliminate double-voting or the ability of third parties to fraudulently use inactive registrations to cast ballots:

"Inactive voters" are defined as registered voters who have been sent a Section 8 notice and have failed to respond. In California, this includes voters for whom the post office has returned a [Voter Notification Card] because the voter has moved. What is important to keep in mind is that "inactive" voters under the California Elections Code and the NVRA are registered voters, eligible to vote in an election, provided the voter confirms residency at the polling place. Under California law, however, voters in the Inactive Voter File are not mailed election materials, and are not taken into consideration in determining the number of signatures required for qualification of candidates or ballot measures, precinct size, or other election administration processes.

The California Secretary of State's office confirmed to us directly that "the only way for inactive voters to obtain a ballot is for them to request a ballot in person at either a county elections office or at a polling location."

Kristen Clarke, president and executive director of the Lawyer's Committee for Civil Rights Under Law, told us efforts such as the one undertaken by Judicial Watch and a similar one undertaken by another non-profit, the Public Interest Legal Foundation (PILF), are not meant to strengthen election systems but rather to bully election officials into purging voter rolls, in contrast to both the spirit and letter of federal election laws.

Often, she said, such figures produced by the likes of Judicial Watch and PILF fail to account for things such as active military members or students attending university away from their home jurisdictions that may affect figures and numbers in different ways:

It’s not just Judicial Watch. PILF used these inaccurate figures to target 248 local jurisdictions levying the claim they have more registered voters on the roles [sic] than eligible people. Then we have the president who with great frequency repeats similar numbers.

What we’re seeing is a campaign to create public hysteria about voter fraud. We know these figures are wrong and these efforts are aimed a voter suppression.

Clarke added that U.S. census data is not a reliable measure of eligible voting population, and that
inactive voters can only be removed from rolls under specific circumstances, as noted in a memo sent from her organization to the 248 jurisdictions targeted by PILF:

Using an unreliable and inaccurate assessment of voter registration rates, PILF wrongly asserts that the jurisdictions it has targeted have more voters on the rolls than eligible residents. It then falsely claims these high registration rates alone provide strong evidence that a jurisdiction is not fulfilling its obligation to maintain accurate voter rolls.

United States Census data, which PILF apparently relies on to estimate the eligible voting population, is neither designed to measure eligible voters nor does in fact do so. Population for Census purposes is not the same as eligible population for voting purposes. For example, students, service members and others are eligible to vote in jurisdictions where they currently live, even if the Census may count them as part of the population in other areas.

The figures PILF relies on to estimate registration rates fare no better. These reflect only the high-water mark rates at “book closing,” the period immediately before an election when there are typically large numbers of new registrants, and when election officials are restricted from removing people from the rolls.

Even if a jurisdiction had more registered voters on its rolls than eligible population, there are many reasons why this might be proper and, indeed, evidence of compliance with the law. For example, when a registrant is thought to have changed residence, the law explicitly prohibits the removal of the voter’s name from the rolls unless either the voter has confirmed the change in writing or a sufficient waiting period has elapsed. A state complying with this requirement, then, will necessarily have ineligible voters on the rolls for a limited period of time. Likewise, in the three months prior to any federal election, states must halt most of their voter-removal efforts. At the same time, as the election approaches, new voters are registering in high numbers. This, too, will result in high registration rates when they are evaluated close to a federal election.

PILF’s allegations of poor list maintenance in hundreds of jurisdictions around the country is baseless. Jurisdictions are not required under the NVRA or any other federal statute to take the actions PILF urges. Indeed, hasty and ill-considered list-maintenance programs are more likely to give rise to violations of the NVRA, and could put voters at risk of improper removal and, ultimately, disenfranchisement.

When all of California (rather than eleven select counties) is taken into account, the figures offered in a 2 January 2018 report issued by the Secretary of State's office list more than 25 million adults eligible to vote residing in California, but fewer than 19 million registered voters. The state would have to encompass more than 6 million "ghost voters" on its rolls for the number of registered voters to exceed the number of eligible adults.

Moreover, in the 2016 presidential election, Democratic candidate Hillary Clinton won the state of California by more than 3.4 million votes over her closest competitor, Republican Donald Trump. Virtually every single one of the claimed 3.5 million "ghost voters" in the entire U.S. would have had to come to California and cast fraudulent votes in order to be responsible for that outcome.

The trope that upwards of 3 million people voted illegally in the 2016 presidential election is so persistent that it resulted in a now-defunct voter fraud commission, which was quietly disbanded in January 2018 without presenting any evidence of widespread voter fraud.

10 April 2018: We modified the claim and rating sections of this page to better explicate multiple related but distinct aspects of the issue.