Some 4,000 planes were grounded in the span of a few hours. 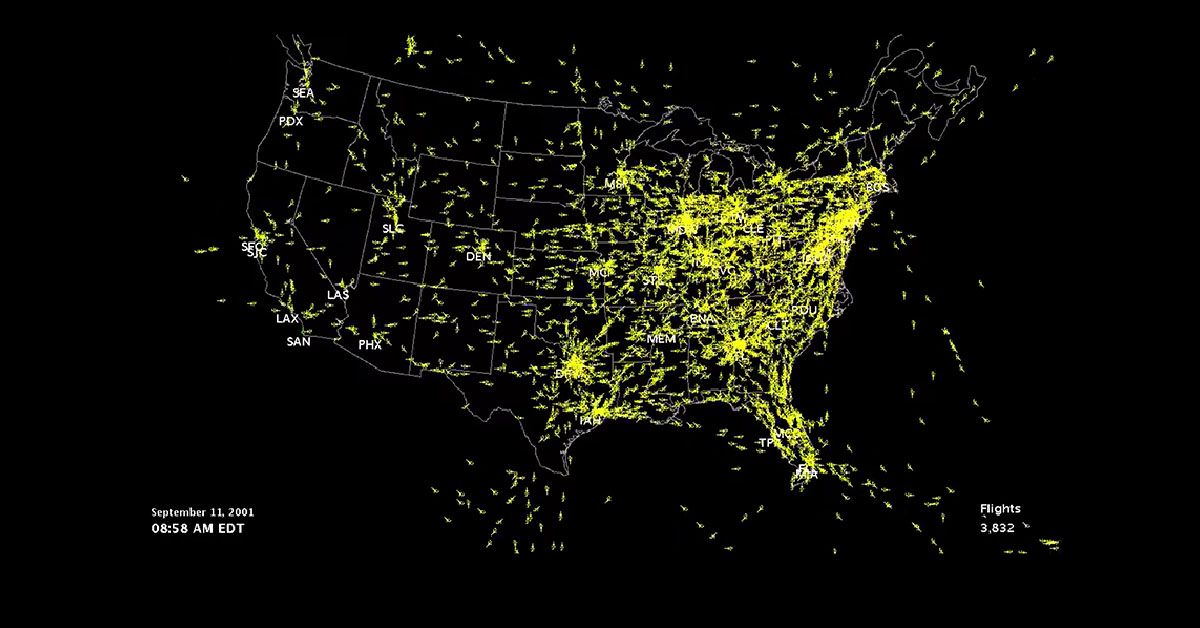 Claim:
An animation video shows air traffic over the United States on Sept. 11, 2001, as thousands of flights were grounded after a terrorist attack on the country.
Rating:

On the morning of Sept. 11, 2001, shortly after a plane crashed into the Twin Towers in New York City, the Federal Aviation Administration (FAA) ordered all planes flying over the United States grounded. In the span of a few hours, air-traffic controllers helped clear the skies of nearly 4,000 commercial planes.

An animation video supposedly showing the amount of air traffic over the U.S. quickly diminishing in the aftermath of the terrorist attack is frequently shared online on the anniversary of 9/11:

This animation is real and is based on actual air-traffic control data from that date.

NASA created the video for the National Air and Space Museum's "America by Air" exhibition. It was originally shared to the museum's YouTube page on Sept. 9, 2011, with the following description:

This animation was created by NASA using FAA air traffic control data from September 11, 2001. It shows the rapid grounding of air traffic across the US, and redirection of incoming international traffic, in response to the 9/11 terrorist attacks. Time is at lower left, number of planes in the air lower right. At 9:06am, FAA issued a ground stop to all traffic not yet departed that would encounter NY airspace ["tier one"- NY, DC, Boston, Cleveland] . A series of rapid decisions followed, including redirecting inbound traffic away from NY and warning airplanes in the air of potential cockpit intrusion. At 9:45am, FAA Command Center decided to close all US airspace for the first time in history. Within a few hours, all commercial air traffic was grounded. This animation is displayed in the National Air and Space Museum's "America by Air" exhibition.

A longer version of this clip from the YouTube channel AirBoyd includes various annotations to explain what was happening while planes were being grounded across the country:

The number of planes in the sky on that day peaked at around 4,050 about 9:25 a.m. EDT. FAA air-traffic controllers worked to ground all commercial flights over the next few hours, and by noon, the sky was nearly empty.

A contemporary newspaper clipping of an Associated Press article describes how "Air traffic around the nation was halted yesterday for the first time in history": 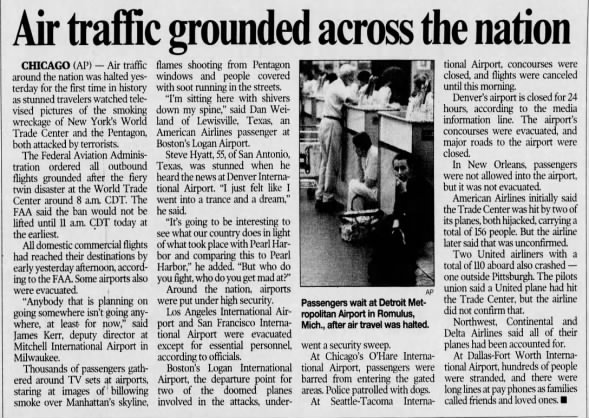