Does Nigerian Girls’ Science Fair Project Turn One Liter of Urine Into Six Hours of Electricity?

A urine-powered generator built by a team of high school girls at Maker Faire Africa in 2012 is pretty slick, but the technology is not as game-changing as numerous online images have suggested. 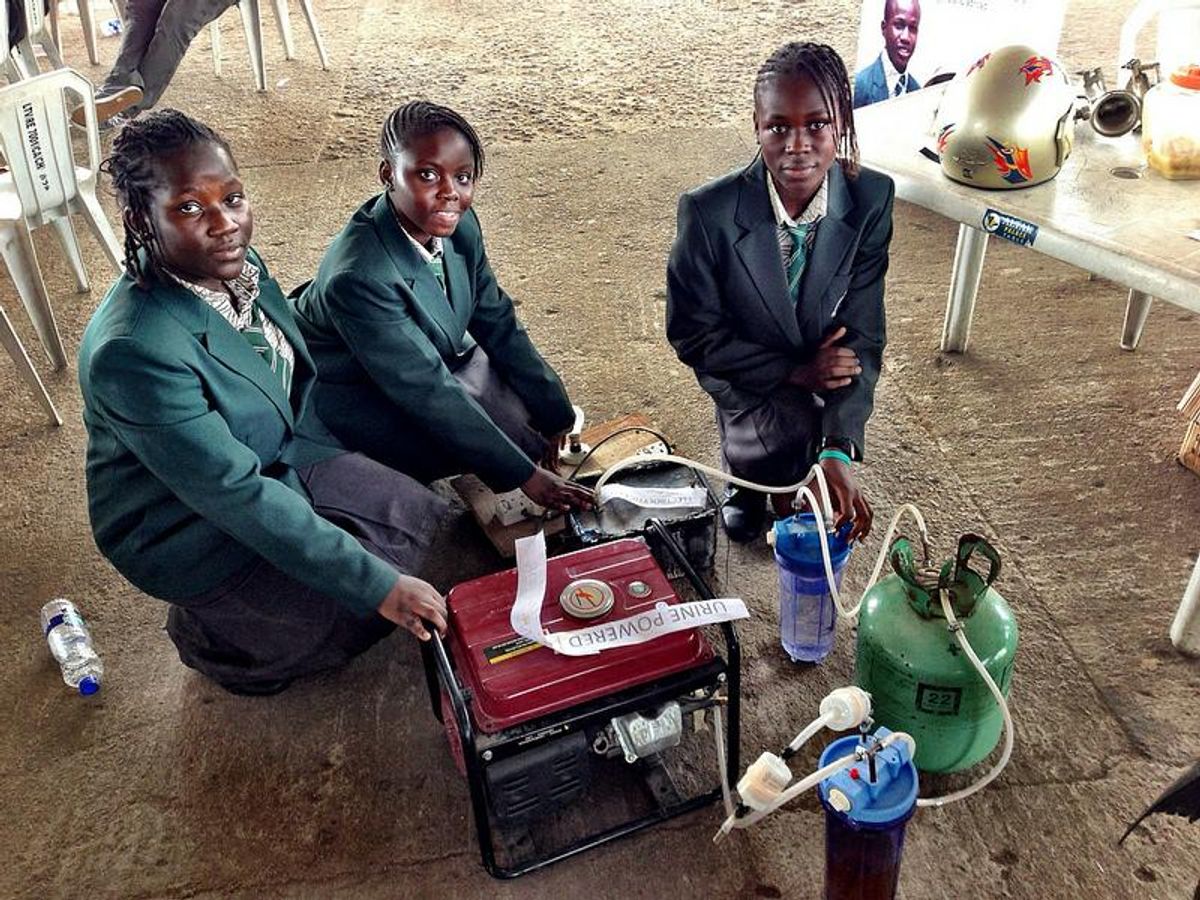 Claim:
A team of four Nigerian girls has created a generator that produces six hours of electricity using only a single liter of urine as fuel.
Rating:

A device built by a team of high school girls in Nigeria generates electricity from urine.

The urine alone is not generating the electricity, and the device uses more energy than it produces.

On 6 November 6 2012, Maker Faire Africa, a science fair and festival, posted a story about one of the projects featured in that year’s festival, a urine-powered generator created by four 14- and 15-year-old students:

Possibly one of the more unexpected products at Maker Faire Africa this year in Lagos is a urine powered generator, created by four girls. The girls are Duro-Aina Adebola (14), Akindele Abiola (14), Faleke Oluwatoyin (14) and Bello Eniola (15). One liter of urine gives you six hours of electricity.

That page described, in broad terms, how the device worked:

The conclusion drawn by a number of the online images hailing this invention as the solution to Earth’s global warming and energy problems is that the urine alone is generating the electricity. But this is not the case, as additional energy in needed to separate the hydrogen from the oxygen in the urine so that the former can be used as a fuel source (one of the major reasons why water fuel cells are not powering our cars right now).

The way around this problem, for the purpose of the science fair project, was to put the urine (or, more accurately, the H2O in the urine) through an electrolysis cell. Duro-Aina Adebola, the 14-year-old who came up with the project, explained how the group used an old car battery for this step, in a documentary produced by the youth-oriented African television program TVC in the Streets:

This is just a normal car battery: we just removed the contents and then inserted our electrodes; we used stainless steel mesh as our electrodes.

While it is not clear whether the chemicals remaining in the car battery or the bacteria feeding off the urine are used to generate a current (both explanations have been positied in media reports), scientists agree that the device does not produce a net gain in energy. Gerardine Botte, a professor of chemical and biomolecular engineering at Ohio University, told Forbes that:

[I]t takes more energy to extract hydrogen from urine than you end up getting in return as electricity. The energy equation gets even more skewed by the inefficiency of the generator used in the girls’ project.

That does not mean that the girls' device is just a form of parlor trick, however — in fact, the real significance and motivation behind the project may have been lost by those trying to sell it as an advance in sustainable energy. In the TVC in the Streets documentary, Duro-Aina explained that her main motivation for the project was hearing about an increase in carbon monoxide deaths from fossil-fuel powered generators put into use due to a failing Nigerian energy grid and wanting to "make a generator that won’t release carbon monoxide."

In that respect, the girls' invention was an unqualified success. Using secondhand or other easy-to-find parts, these high school students were able to build a device that separated hydrogen gas from urine, to create a system to purify and store that gas, and to convert a traditional generator into one that worked with that hydrogen gas.

This device might not be the solution to our future energy needs, but such a system could be a way to remove waste while recovering some of the energy involved in that process and thereby fuel homes without filling them with the poisonous gases that gas-powered generators typically produce. This is a point that Gerardine Botte also made, saying that "when put in the context of wastewater treatment, the concept of using urine as a hydrogen source to produce energy has great potential."

As far as high-school science fair projects go, this is as impressive as it gets. But, unfortunately, no such science project can rewrite the laws of thermodynamics.