Did a Movie Begin with an 'Unlikable Female Protagonist' Warning?

A picture was posted to Reddit that supposedly showed a unique warning displayed at the beginning of a movie. 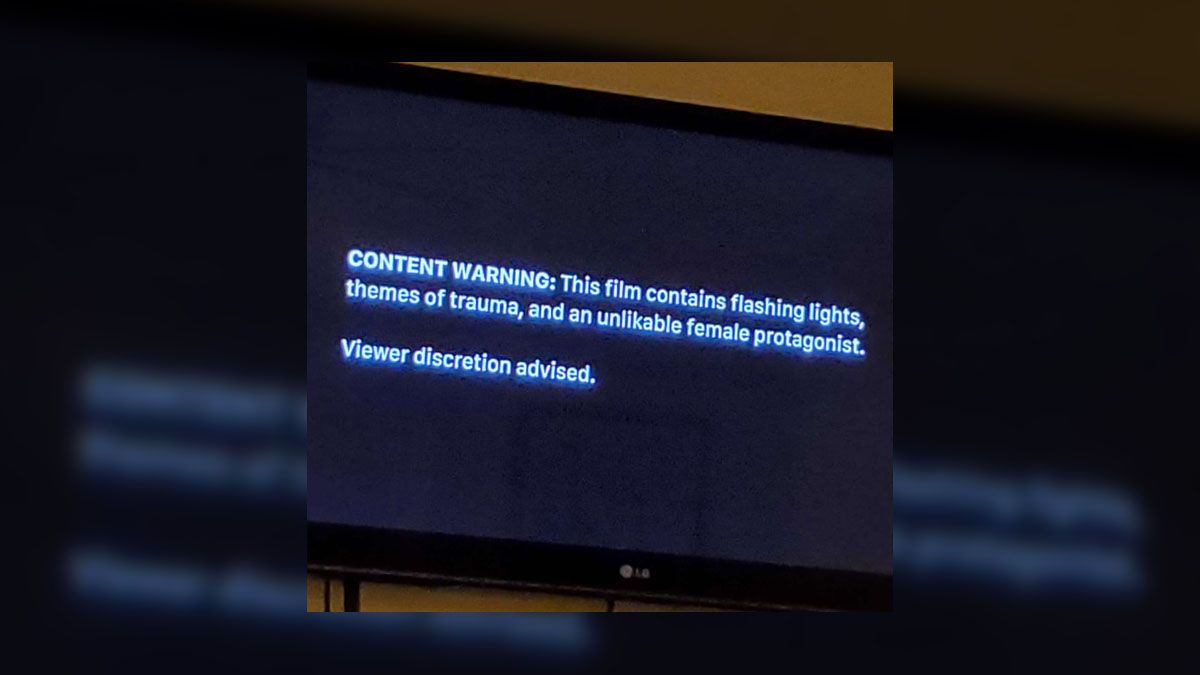 The 2022 film Not Okay began with a warning that said it had an unlikable female protagonist. (Image Via Reddit)

Claim:
A movie began with a genuine disclaimer that warned viewers of an "unlikable female protagonist."
Rating:

On Nov. 29, 2022, a picture was shared on Reddit with a caption that claimed a movie began with a unique disclaimer. The warning purportedly read, "Content Warning: This film contains flashing lights, themes of trauma, and an unlikable female protagonist. Viewer discretion advised." The caption of the Reddit post said that the movie was rated PG-13, but did not identify title.

This claim was true. The disclaimer was displayed at the beginning of the film "Not Okay," which was written and directed by Quinn Shepard. It was released on the Hulu streaming service on July 29, 2022.

According to an interview with Shepard published by IndieWire.com, the "unlikable female protagonist" disclaimer at the beginning of the "internet satire" film was not a joke. Shepard said that the message at the beginning of "Not Okay" was added after viewers raised concerns during test screenings before the film was released:

"The content warning was borne out of, to be honest, our test screenings," she said during a recent interview with IndieWire. "We un-ironically and consistently got responses from — I'm not going to say what demographic, but you might be able to guess — people who were quite literally like, 'Why would someone make a movie with an unlikable woman?' It's something I've repeatedly heard, and a lot of my other writer friends have as well. If you portray flawed women or women who reflect societal flaws, you get notes like, 'I literally don't understand why you tell a story about this character.'"

Shephard couldn't wrap her head around that, mostly because films featuring unlikeable male protagonists are often hailed as modern masterpieces, from "American Psycho" to "The Wolf of Wall Street." Audiences understood that those films were "a statement and not an endorsement," Shephard said. Why can't the same apply to "Not Okay"?

According to a synopsis on IMDb.com, "Not Okay" tells the story of a woman, Danni Sanders, who is portrayed by actor Zoey Deutch. Sanders doesn't have many social media followers, so she pretends (with the help of a green screen and some picture-editing tools) to be on a trip to Paris, France. However, things later take an unexpected turn.

Danni Sanders (Zoey Deutch), an aimless aspiring writer with no friends, no romantic prospects and - worst of all - no followers, fakes an Instagram-friendly trip to Paris in the hopes of boosting her social media clout. When a terrifying incident strikes the City of Lights, Danni unwittingly falls into a lie bigger than she ever imagined. She "returns" a hero, even striking up an unlikely friendship with Rowan (Mia Isaac), a real trauma survivor dedicated to societal change, and scooping up the man of her dreams, Colin (Dylan O'Brien). As an influencer and advocate, Danni finally has the life and audience she always wanted. But it's only a matter of time before the façade cracks, and she learns the hard way that the Internet loves a takedown.

The trailer for "Not Okay" doesn't show the "unlikable female protagonist" warning, but does provide a glimpse at Deutch's portrayal of Sanders.