Were UN Vehicles and Trucks Spotted in Southern States?

UN vehicles and trucks spotted in the U.S. weren't purchased to address imminent economic collapse in America; they were built in Virginia for UN operations abroad. 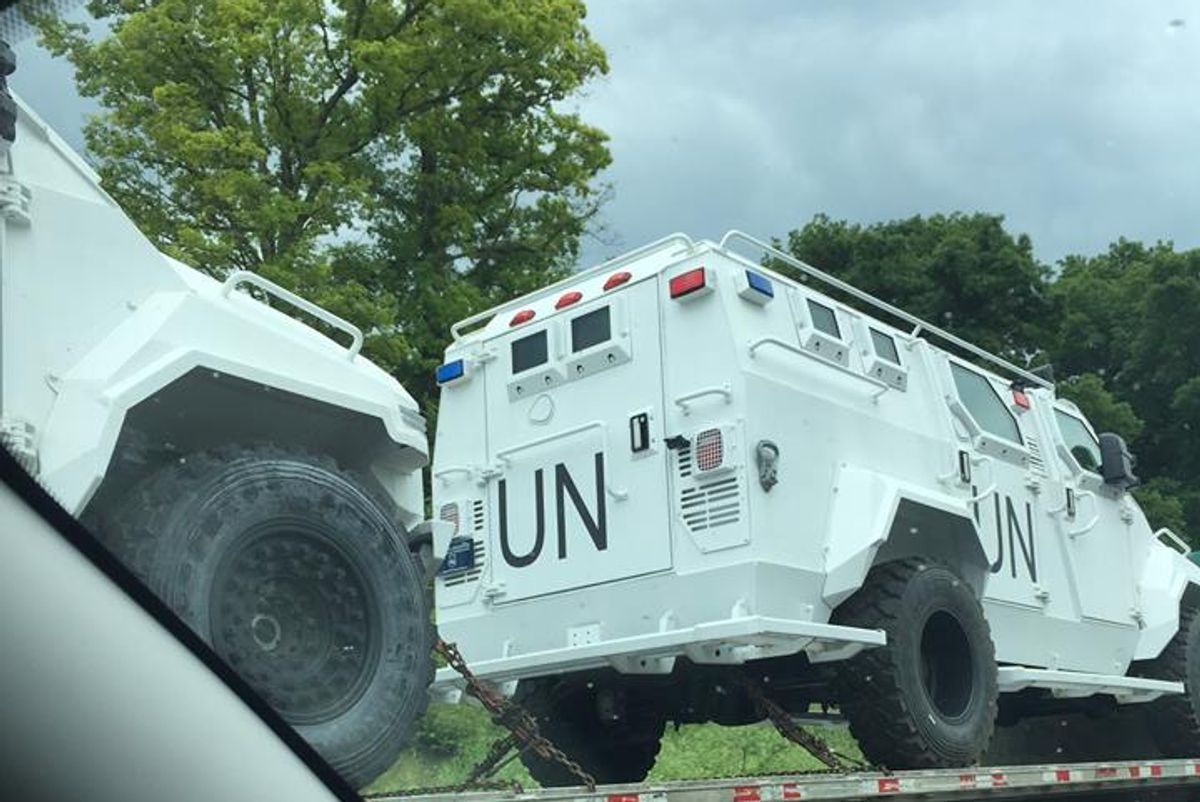 Claim:
UN vehicles have been quietly positioned for action in Virginia and Kentucky as a preemptive response to imminent economic collapse.
Rating: The images and post were shared tens of thousands of times on Facebook, and they even inspired their own Daily Mail article pondering whether "the U.N. is preparing [to respond to] economic collapse in America." The Daily Mail (a publication that often does not allow the truth to stand in the way of a good story) apparently based their "reporting" on nothing more than some Facebook-posted photographs:

The white trucks, equipped with large off-road tires, were seen being transported on Interstate 81 on Friday. They appear to be Alpine Armoring's Pit-Bull VX SWAT Truck models.

Jeff Stern posted photos of the vehicles on Facebook, writing: 'Can't begin to tell you how many of these I passed today on 81 near Lexington VA. Interesting times ahead!'

[Stern's] post sparked website Liberty is viral to ask: 'Are these U.N. troops here preparing for economic collapse in America? Is this related to Iran ships approaching the U.S. border?' while Alex Jones posted a video warning of the 'U.N. takeover of America.'

The U.N. is an intergovernmental organisation with 193 member states.

Unlike the Daily Mail, we contacted Alpine Armoring, the manufacturer named in their article, to inquire about the images. According to an individual with whom we spoke at Alpine, the vehicles seen in these photographs were purchased by the United Nations for use outside the United States. A number of defense industry manufacturers are based in and around Washington, D.C. (a region that includes Virginia) for obvious logistical reasons, and the representative confirmed that the trucks were ordered by the UN for use in locations abroad.

After manufacturing, the UN vehicles require transportation to their final ports of call inside the U.S., and driving them to those final embarkation points could potentially put several thousand miles on them prior to their being loaded onto cargo planes or ships, so the trucks seen here were loaded onto a flatbed truck and transported in that fashion. It is a reasonable inference that, depending on their route and final destination, the same trucks would be spotted in other Southern states (particularly if they were to be sent abroad via a cargo ship leaving from a Southern port). It isn't clear whether rumors of the trucks being spotted in Kentucky were accurate, or if social media users confused Lexington, Virginia, with Lexington, Kentucky.

It is true that the UN vehicles spotted in Lexington were transported via I-81, but they were on their way to an undisclosed destination abroad and are not being deployed for use within the United States. The rumor associated with them was not unlike reports from October 2014 about a "large truck convoy" in Virginia, which also did not result in the imposition of martial law or a UN takeover. It also bore resemblance to long-circulating rumors about the uncovering of a plot to impose martial law via an overturned tractor-trailer carrying portentous signs, which has traveled around the web since 1999 despite the fact its claims never came to pass.