Former U.N. Diplomat John Ashe did die in a June 2016 accident, but his trial was not set to begin five days later, and he wasn't testifying against Hillary Clinton. 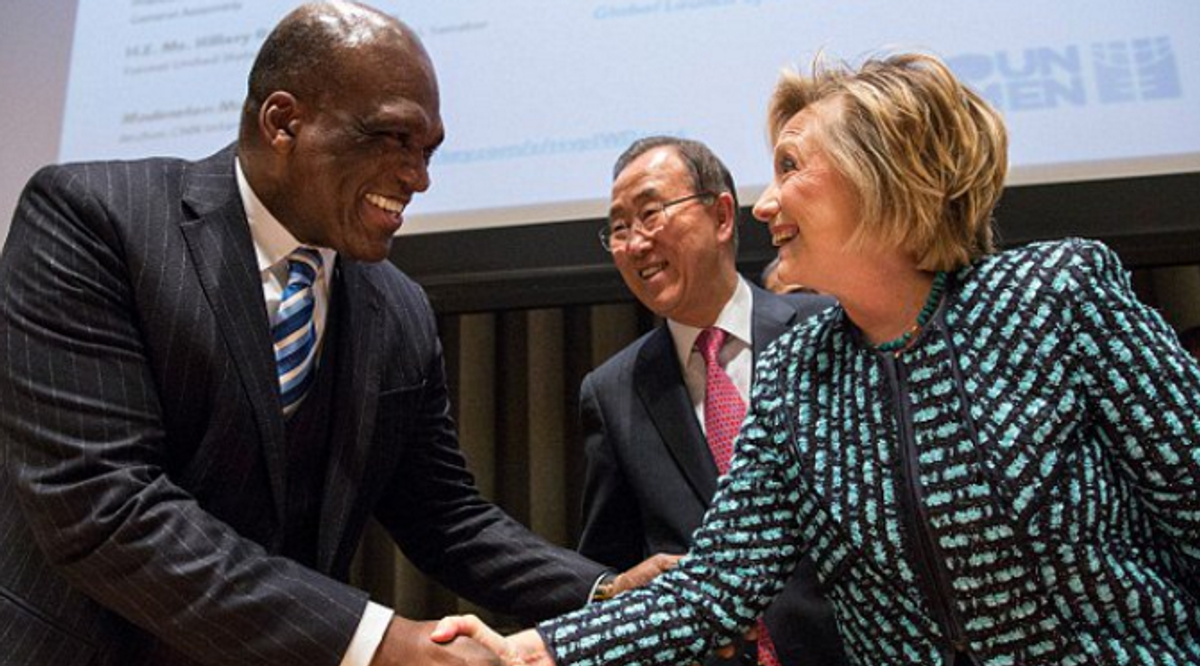 Claim:
Ex-UN Official John Ashe died suspiciously the day before he was scheduled to testify against Hillary Clinton.
Rating:

Former UN Official John Ashe died in June 2016 at his Dobbs Ferry home. His death was initially misreported as a heart attack rather than an accident, and he was about to begin pre-trial meetings related to corruption charges at the time he died.

Ashe's corruption trial wasn't set to begin just days after his death, and he wasn't going to testify against Hillary Clinton.

On 22 June 2016 John Ashe, a former United Nations diplomat from Antigua, died at his Dobbs Ferry, New York, home. According to various accounts, Ashe's death occurred just five days before he was set to stand trial on corruption charges; Ashe's cause of death was initially misreported as a heart attack, but subsequent news accounts attributed his demise to a weightlifting accident:

Ashe, 61, died of injuries while lifting a barbell on a bench, the Westchester, New York, medical examiner's office [said]. Earlier U.N. spokesman Dan Thomas told CNN that Ashe died of a heart attack. He now tells CNN that the information came from a newspaper report in Antiqua, as well as a former colleague of Ashe's. The medical examiner clarified Ashe died from traumatic asphyxia and suffered laryngeal fractures while lifting.

The day after reports of Ashe's passing hit the U.S. news cycle, a conspiracy site claimed that Ashe had been slated to testify against Hillary Clinton on the day he conveniently (that is to say, suspiciously) passed away:

In what a new Foreign Intelligence Service (SVR) report circulating in the Kremlin today calls a “master incestuous maneuver”, the Bush Crime Family has rushed to the side of Hillary Clinton after a top United Nations official set to testify against her in a US District Court yesterday was found dead by FBI agents who were set to deliver him before a Grand Jury. [Note: Some words and phrases appearing in this report are English language approximations of Russian words and phrases having no exact counterpart.]

According to this report, former UN President John Ashe was scheduled to testify against Hillary Clinton yesterday in a New York City US District Court, but when FBI agents arrived at his Dobbs Ferry, New York, mansion he was found dead of what current UN President Mogens Lykketoft said was a heart attack — but that SVR intelligence analysts say in this report is impossible to determine prior to an autopsy being performed and medical tests conducted.

That claim stemmed from a single source: a blogger working under the nom de plume "Sorcha Faal" who publishes fabricated "news" accounts on the political conspiracy site whatdoesitmean.com. RationalWiki says of that blog and author:

Prior fabrications from the same site and blogger held that President Obama ordered the military to nuke the city of Charleston, that Rear Admiral Rick Williams was fired because he revealed Obama's purchase of a mansion in Dubai (Williams was actually terminated for misconduct), and that Vladimir Putin and Barack Obama were locked in a potentially conflict-starting battle over the practices of the Monsanto agribusiness corporation. The claim about Clinton was also a variation on the long-circulating (and equally false) "body bags" rumor holding that the Clintons have frequently "done away" with once-loyal associates who became political liabilities.

We contacted the U.S. District Attorney for the Southern District of New York to verify the claims about Ashe and Clinton. According to the individual with whom we spoke, CNN's report that Ashe's corruption trial was set to begin just five days after his death was not accurate: Ashe was only scheduled to attend some standard pre-trial meetings in the following days.

Moreover, the U.S. District Attorney's spokesperson told us that no portion of Ashe's court case pertained to Hillary Clinton. Not only was he not set to testify against Clinton five days before he died, neither was he slated to do so at any point during the trial. A copy of the 5 October 2015 complaint against Ashe and several co-defendants (which involved Ashe's taking bribes from developer David Ng to support one of Ng's real estate projects at the U.N.) can be located here [PDF].