Did UN Ban the Word ‘War’ Regarding Russia's Invasion of Ukraine?

Staff were reportedly advised to instead use “conflict” or “military offensive.” 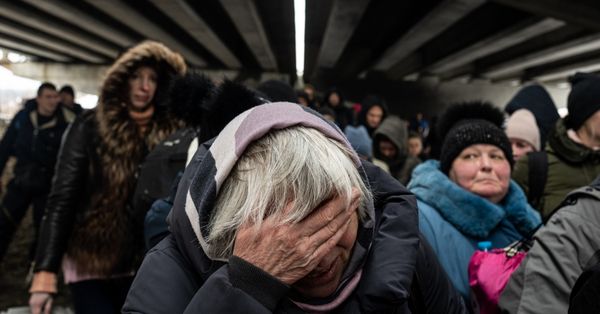 Claim:
In early March 2022, the United Nations banned its staff from using the word “war” in reference to Russia's invasion of Ukraine.
Rating:

The U.N. Regional Information Centre for Western Europe at the Department of Global Communications issued guidance via email on March 7, 2022, to avoid using the word "war" until the U.N. had an official policy. However…

The U.N. as an entity did not ban the word “war.” The Office of the Spokesperson for the Secretary-General at the United Nations in New York told Snopes that no such email had been sent to staff from U.N. headquarters, and provided multiple examples of senior U.N. officials using the word "war" in reference to the Russian invasion of Ukraine.

Editor's Note: Since the original publication of this article, The Irish Times revised its initial story, dropping the claim that the U.N. had "banned" used of the words "war" and "invasion." Then, on March 9, the Times published a follow-up story reporting that "new documents reveal top-level UN policy setting soft language on Ukraine." (All three articles have been archived at the links above.)

On March 8, 2022, the Irish Times reported that the United Nations (U.N.) banned its staff from using “war” or “invasion” when referring to Ukraine in what the publication said was a “move to balance political sensitivities as powerful member state Russia cracks down domestically on those who use the words.”

An email that was reportedly distributed to staff the previous day advised employees to instead use “conflict” or “military offensive” to describe the invasion.

“[Use] ‘conflict’ or ‘military offensive’ and NOT ‘war’ or ‘invasion’ when referring to the situation in Ukraine,” the publication reported the email as having read. The email also reportedly banned staff from adding a Ukrainian flag to social media profiles or websites, which has become a symbol of solidarity.

“This is an important reminder that we, as international civil servants, have a responsibility to be impartial,” the email reportedly read. “There is a serious possibility of reputational risk that has been flagged by senior officials recently.”

In a tweet posted the same day, the Minister of Foreign Affairs of Ukraine Dmytro Kuleba called upon the U.N. to “swiftly refute such reports if they are false.”

Snopes contacted the Office of the Spokesperson for the Secretary-General at the United Nations by phone. In response, we were told in an emailed statement that there is a “mistaken impression” that staff were told to avoid using certain words to describe the situation in Ukraine.

“It is simply not the case that staff have been instructed not to use words like ‘war’ and ‘invasion’ to describe the situation,” wrote Stephane Dujarric, spokesperson for Secretary-General Antonio Guterres. We were then referred to the below tweet shared on March 7 by Under-Secretary-General Rosemary DiCarlo in which she directly referred to the situation as a "war."

Similarly, we were told that the Secretary-General has “used a wide range of words in his statements and remarks to the press to describe what is going on.”

“At the same time, I would remind you that the staff of the United Nations are international civil servants and uphold the responsibilities that that position entails,” added Dujarric.

“Accordingly, staff are asked to frame any communications on Ukraine as well as other political matters in a manner that is consistent with the position of the Organization and the statements of the Secretary-General. This applies not only to the on-going situation in Ukraine but other situations around the world."

Snopes asked for a copy of the email that was purportedly sent to staff and referenced in the Irish Times. The spokesperson told us that while he does not doubt the existence of an email that was said to be sent out, there there was no such communication sent from headquarters, and senior U.N. officials have themselves used the word "war" in their reference to the situation.

"There was an email that went to all staff reminding them of their responsibilities as international civil servants in what they post on social media," Dujarric told Snopes in a phone call. This was said to be a regular email that goes out to staff whenever there is a global crisis.

"U.N. staff by nature are very passionate, and this [email] was a reminder that they represent an organization, and there are certain standards to uphold," Dujarric added. He noted that there may have been an email that was sent from a local manager, but the only official communication sent by the U.N. was the following statement, which we received via email:

Guidance to staff on personal communications about the situation in Ukraine

The crisis in Ukraine is deeply upsetting and a matter of grave concern to United Nations staff. The Secretary-General has also made the position of the Organization regarding the hostilities very clear.

While it is understandable that many of us feel compelled to share views about the events that are unfolding, including in personal fora such as social media, staff are reminded of their rights and duties as international civil servants, which require us to act independently and impartially.

Please take a moment to familiarize yourselves anew with the policies on the Status, basic rights and duties of United Nations staff members; outside activities; and the guidelines for the personal use of social media. Attention is also drawn to the “2022 Guidance on Political Activities” recently issued on iSeek by the UN Ethics Office.

Accordingly, staff are asked to frame any communications on Ukraine as well as other political matters in a manner that is consistent with the position of the Organization and the statements of the Secretary-General.

Our hearts and minds are with all who suffer as we join the global community in its cry for peace.

Naomi O’Leary, Europe correspondent for the Irish Times who wrote the original article, contacted Snopes and forwarded screenshots of the email sent from Sherri Aldis, director of the U.N. Regional Information Centre for Western Europe at the Department of Global Communications. We were able to confirm that the email in question was sent to staff on March 7 with a subject line that read, “Ukraine crisis communications guideline.” The email further noted that it was “an INTERNAL document, and should not be shared.”

The section in question read:

Some specific examples of language to use/not use at the moment:

The full email, in screenshots courtesy of O'Leary, is posted in its entirety below: While it is true that an internal email from a branch of the U.N. advised staff to avoid using the word “war,” the U.N. as an entity did not officially or publicly ban the use of the word. Furthermore, several U.N. senior officials referred to the conflict directly as a “war” on social media. It appears that Aldis advised staff to avoid using the term “war” until official guidance was released by the U.N., rather than outright prohibiting them from doing so. As such, we updated the rating this claim from “False” to “Mixture.” (We have archived the original version of this article here.)

Following a public exchange between O’Leary and the verified account U.N. Spokesperson on Twitter, we followed up with the agency for further clarification as to the scope of the email recipients, and if the email went out to one department and not all of U.N. staff. We also asked the agency to forward the official policy once it is available. We will update the article accordingly.

Update [March 8, 2022]: Claim rating was updated from "False" to "Mixture" after receiving screenshots of the email in question.