Yes, a Ukrainian Mother Wrote Vital Information on Her Toddler's Back

The photograph has become a symbol of the terror of Ukrainian parents trying to keep their children safe in wartime. 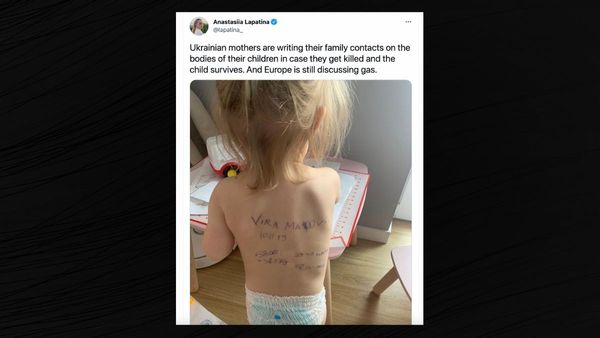 Claim:
A photograph shows a Ukrainian toddler whose mother wrote vital information on her back during the Russian invasion.
Rating:

During the Russian offensive against Ukraine, which started on Feb. 24, 2022, terrified Ukrainian parents sought to safeguard their children in the event that they were separated amid the chaos and panic of war and flight.

One viral photograph that starkly captured the desperation these parents felt showed a small, diaper-clad child with her name, birthdate, and phone numbers for her parents scrawled on her back in black marker ink. It was posted to Twitter on April 4, 2022, by Ukrainian journalist Anastasiia Lapatina, who reports for the Kyiv Independent:

The source of the photograph was the girl's mother, who originally posted it on Instagram.

In an interview with The New York Times, the child's mother, Oleksandra Makoviy, said the writing was a desperate attempt to prepare the girl in the event that the worst happened and she was orphaned.

"I thought that if my husband and I died, Vira could find who she is," Makoviy told the newspaper.

The phone numbers on the child's back say they are for "mama" and "papa."

The image became a symbol of the plight of civilians as the brutal war, and reports of atrocities committed by Russian soldiers against Ukrainian civilians, continued on.

Patil, Anushka. “Name, Phone, Address: The Writing on a Child’s Back Is Now a Symbol of Ukrainian Parents’ Terror.” The New York Times, 12 Apr. 2022. NYTimes.com, https://www.nytimes.com/2022/04/12/world/ukraine-war-children-parents.html.