Is This Ukraine Vice President's Wife in Combat Gear?

No, and it's not the first lady either. 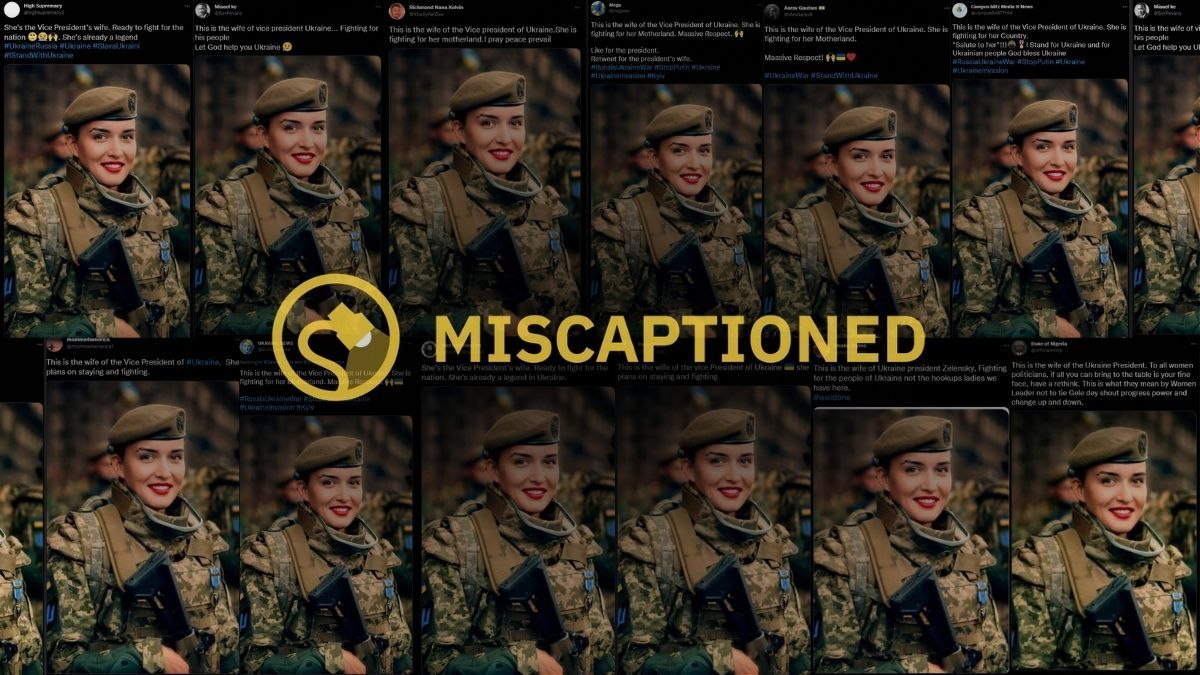 On Feb. 25, 2022, a photograph of a woman in a military uniform was widely shared on social media attached to the claim that it showed the Ukrainian vice president's wife taking up arms to fight against Russia's invasion: This photograph was not taken in February 2022, and it does not show the Ukraine vice president's wife.

Who Is Ukraine's Vice President?

One reason that this claim is wrong is that Ukraine does not have a "vice president." Therefore, "the Ukraine vice president's wife" simply doesn't exist.

Volodymyr Zelenskyy is the president of the Ukraine. While Denys Shmyhal, the prime minister of Ukraine, would likely be considered the next most senior official, Ruslan Stefanchuk, the chairman of the Verkhovna Rada, Ukraine's parliamentary body, would take office if Zelenskyy was unable to perform his duties. (Stefanchuk would have limited powers and would only serve as "acting president" as a new election is conducted).

In any case, the above-displayed picture does not show the wife of any of the aforementioned men.

This photograph shows an unnamed female Ukrainian soldier during a rehearsal for a military parade in celebration of Ukrainian independence. It is available via Alamy with the caption:

Is This the First Lady of Ukraine?

While this photograph was frequently miscaptioned to claim that it showed the wife of Ukraine's vice president (who does not exist), some iterations claimed that this showed Olena Zelenska, the first lady of Ukraine. That is also false.

Here's a picture of Zelenska that was posted to her Instagram account shortly before Russia's invasion. It's clear that she is not the same woman pictured in the above-displayed image.

A different photograph has also made the rounds on social media claiming to be Ukraine's first lady. The following image, however, does not show Zelenska. According to Reuters, this image actually shows former Miss Ukraine Anastasiia Lenna. On March 1, Zelenska posted a series of photographs of Ukraine's many female soldiers along with a message of support (translated via Google):

Before the war (how scary and still unusual it is to say this), I once wrote that there are 2 million more women in Ukraine than men. Just statistics. But now it is taking on a whole new meaning. Because it means that our current opposition also has a particularly feminine face.

My admiration and bow to you, incredible compatriots! ?

Those who fight in the ranks of the Armed Forces, and those who enlisted in the defense. Those who heal, save, feed.

Volunteers who find everything they need for this. And to those who continue to perform their usual work - in pharmacies, shops, transport, utilities, so that life goes on and wins.

Those who take children to shelters every day without panic and entertain them with games and cartoons to save children's minds from the war. Those who give birth in bomb shelters.

Today is the first day of spring. Remember how we all congratulated each other on this day before the war (again, this terrible phrase)?