A Ukrainian soldier's response to a Russian warship has become a powerful slogan for the besieged nation. 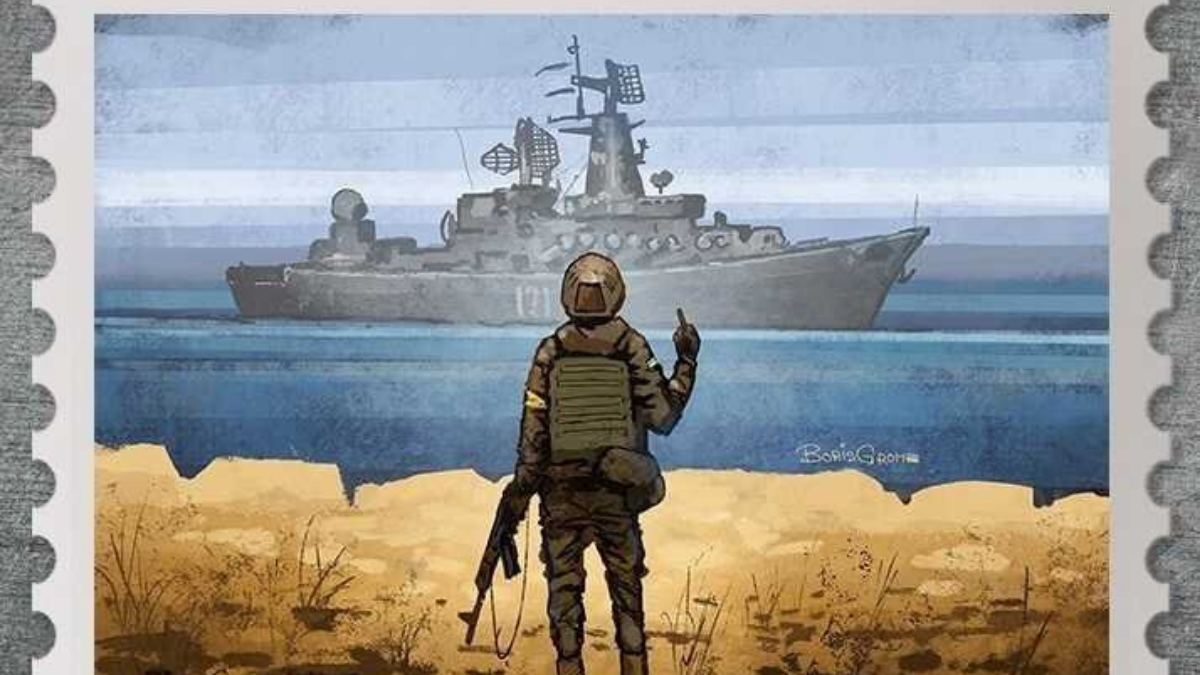 Claim:
A viral image shows the design for an official Ukraine stamp to commemorate the moment a Ukrainian soldier said: "Russian Warship, Go Fuck Yourself."
Rating:

In March 2022, an image started circulating on social media that supposedly showed a stamp released by the Ukrainian government that showed a soldier giving the middle finger to a Russian warship. This is the design for an official stamp that was approved by Ukrposhta, the Ukrainian post office, in March 2022, called "Russian Warship, Go Fuck Yourself." The artwork for this stamp was created by Borys Groh to commemorate a Ukrainian soldier's profane refusal to acquiesce to a Russian warship's demand to lay down weapons.

Ukrposhta wrote in its announcement for the new stamp (translated via Google):

The author of the winning sketch, Borys Groh, lived in the Crimea in Evpatoria, painted all his life, then studied to be an artist and began to create paintings professionally. But in 2014, Russia occupied Crimea and he was forced to leave his home - first went to Kiev, and later moved to Lviv.

2022 - Russia attacks Ukraine again. The first days of the war, our military is defending Snake Island. Their heroic defense impressed Borys so much that he decided to paint a picture to lift the mood and fighting spirit of Ukrainians, as well as to attract the attention of foreigners to Ukraine, who follow his work on social networks. He created it in about three days, and if he wasn't distracted by the news, in 5 hours.

The stamp will commemorate an incident that took place in February 2022, during the first few days of Russia's invasion of Ukraine, when a Russian warship threatened a group of Ukrainian soldiers on Snake Island. NPR reported:

Ukrainian service members guarding a Black Sea island are being heralded for their defiant response to a Russian warship demanding their surrender.

The Ukrainian forces were guarding Zmiinyi Island, or Snake Island as it's known, which lies about 30 miles east of the southern border between Ukraine and Romania on the Black Sea.

"This is a Russian warship," a voice on the recording can be heard saying. "I ask you to lay down your arms and surrender to avoid bloodshed and unnecessary deaths. Otherwise, you will be bombed."

After a few moments, a terse response came from the Ukrainians: "Russian warship. Go f*** yourself."

While initial reports indicated that these Ukrainian soldiers were killed shortly after this exchange, it is now believed that they survived the ordeal, were captured by Russian forces, and then sent to sent to Sevastopol, a city in Russian-annexed Crimea.

Ukrposhta said that the new stamp will be available in the "near future" and encouraged Ukrainians to send it to their "friends abroad or send a fiery "hello" to the Russians."

You can see other fact checks related to Russia's attack on Ukraine here. If you'd like us to investigate a rumor, please drop us a line here.

Update [March 17, 2022]: Edited to clarify that the design for this new stamp has been officially approved, though the stamp itself had not yet been issued at the time of publication.