The legend of the Ukrainian farmer continues to grow. 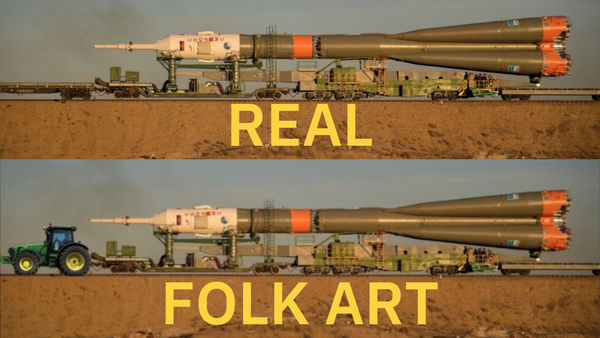 Claim:
A photograph shows a Ukrainian farmer stealing a Russian soyuz rocket with the help of a tractor.
Rating:

In March 2022, as Russia continued its attack on Ukraine, an image started circulating online that supposedly showed a Ukrainian farmer using a tractor to steal a Soyuz rocket: This is not a genuine image but a composite of at least two different photographs.

Since Russia's war on Ukraine began in February 2022, leading to the deaths of thousands of civilians and forcing millions to flee their homes, a number of photographs and videos have circulated on social media that supposedly show Ukrainian farmers using their tractors to tow away abandoned Russian military gear. While some of these images are likely real (these pictures are difficult to verify as they often are shared by unknown sources without much detail about where and when they were taken), a few images, such as the one above, are digital fakes.

The above-displayed image was created by manipulating a photograph from October 2018 when the Soyuz rocket was transported to a launchpad in Russia. In the original picture from NASA, there's no tractor.

The tractor has become a symbol of Ukrainian resistance to Russia's invasion. The CBC reported:

Ukraine's farmers now have the fifth-largest army in Europe — or so goes a dark joke on the internet, a reference to all the captured Russian military equipment they've towed off the battlefield.

In a country desperate to keep its spirits up in dire times, the near-daily social media posts featuring Ukrainian farm tractors recovering Russian tanks, trucks and missile launchers that got stuck in their muddy fields have certainly helped.

This image was created by @robwormald by altering a photograph from Nasa photographer Bill Ingalls, and originally shared with the caption: "Seems like things are really going off the rails over there :flag-ua:." It was later shared by Промисловий Портал (a site for industrial news in Ukraine) as a piece of “folk art.” Here's the original tweet:

While some photographs and videos of these Ukrainian tractors towing Russian military equipment are likely real, a number of doctored or miscaptioned versions have also been posted on social media. A Russian tank wasn't posted to eBay, for instance, and this picture of a tractor pulling a jet is years-old.

Updated [April 7, 2022]: Updated with credit to the original artist.