Ukrainian is still not a sexuality. 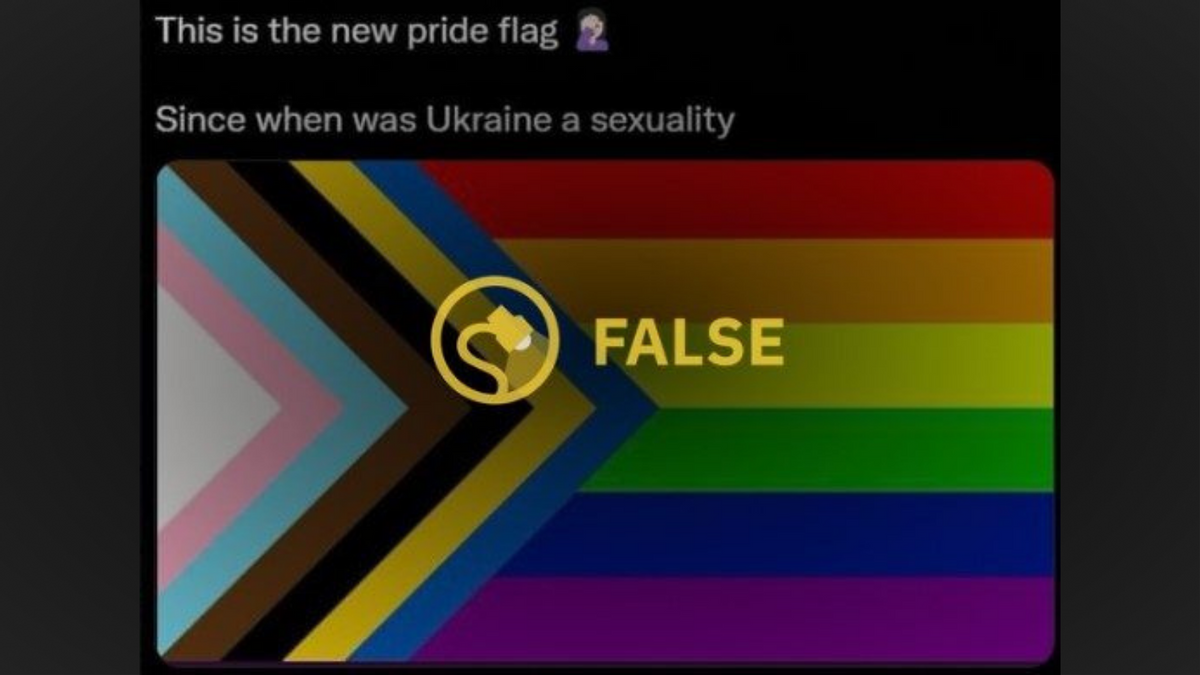 Claim:
The colors of Ukraine's flag, blue and yellow, were added to a flag that's a symbol of LGBTQ pride.
Rating:

Editor's Note: This article addresses an image that was widely circulated on social media which supposedly showed how the colors of Ukraine (yellow and blue) had been added to the "new pride flag." This image originated as satire and is not affiliated with any official LGBTQ organizations. However, the Dublin LGBTQ+ Pride Festival did use a different version of a "progress" pride flag containing blue and yellow on a flyer that welcomed recently displaced refugees from Ukraine.

In late May 2022, as Pride Month approached and Russia's months-long invasion of Ukraine raged on, an image spread on social media that claimed the colors of Ukraine's flag, blue and yellow, were added to a flag that's a symbol of LGBTQ pride. It appears to have been first posted by a Twitter account that used a gay slur in its handle on May 22 in response to a tweet from an anti-racism group that used the hashtag #diversityisourstrength. The fake flag has since been widely shared on social media, including by Rep. Marjorie Taylor Greene.

As National Geographic noted, it was common to use the acronym LGB in the 1990s to refer to lesbian, gay and bisexual people. But as society's understanding of different sexual identities evolved, the acronym changed (while LGBTQ is popular currently, a common variant is LGBTQIA, to recognize intersex and asexual people). Meanwhile, some people believed that the rainbow flag representing LGBTQ pride had also changed over time along with the acronym. But that was not really the case.

Named the "Gay Pride Flag" by the advocacy group OutRight Action International, the original rainbow flag with eight colors was designed by Gilbert Baker for the 1978 Gay Freedom Day Parade in San Francisco. The following year, activists changed the flag — reducing the number of rainbow stripes to six — to lower costs and keep up with demand for the flags. Since then, that flag has remained unchanged. However, activists have created several other flags to represent various sections of the LGBTQ community over the years, including a trans pride flag (which is five horizontal stripes that are light blue, light pink and white). The joke about Ukrainian colors being added to a flag that represents LGBTQ pride is based on the progress pride flag, or what OutRight called the "rebooted pride flag," which Daniel Quasar designed in 2018 to incorporate colors from the trans pride flag and represent marginalized people of color and AIDS patients within the LGBTQ community. Quasar wrote at the time:

The 6 stripe LGBTQ flag should be separated from the newer stripes because of their difference in meaning, as well as to shift focus and emphasis to what is important in our current community climate. The main section of the flag (background) includes the traditional 6 stripe LGBTQ flag as seen in its most widely used form so as not to take away from its original meaning.

The trans flag stripes and marginalized community stripes were shifted to the Hoist of the flag and given a new chevron shape. The arrow points to the right to show forward movement, while being along the left edge shows that progress still needs to be made.

Hoist: 5 half sized stripes representing trans and non-binary individuals (light blue, light pink, white), marginalized POC communities (brown, black), as well as those living with AIDS and the stigma and prejudice surrounding them, and those who have been lost to the disease (black)

This Ukrainian pride flag originated as a joke on social media and has not been adopted by any official LGBTQ organizations. It is worth noting, however, that the Dublin LGBTQ+ Pride Festival used a similar flag to welcome recently displaced refugees from Ukraine.

“From LGBT to LGBTQIA+: The Evolving Recognition of Identity.” History, 19 Oct. 2021, https://www.nationalgeographic.com/history/article/from-lgbt-to-lgbtqia-the-evolving-recognition-of-identity.