Does an Old Photo Show COVID Vax Creator as an Immigrant in Germany?

Ugur Sahin, who led the team that helped find a vaccine breakthrough, definitely has a remarkable personal story. 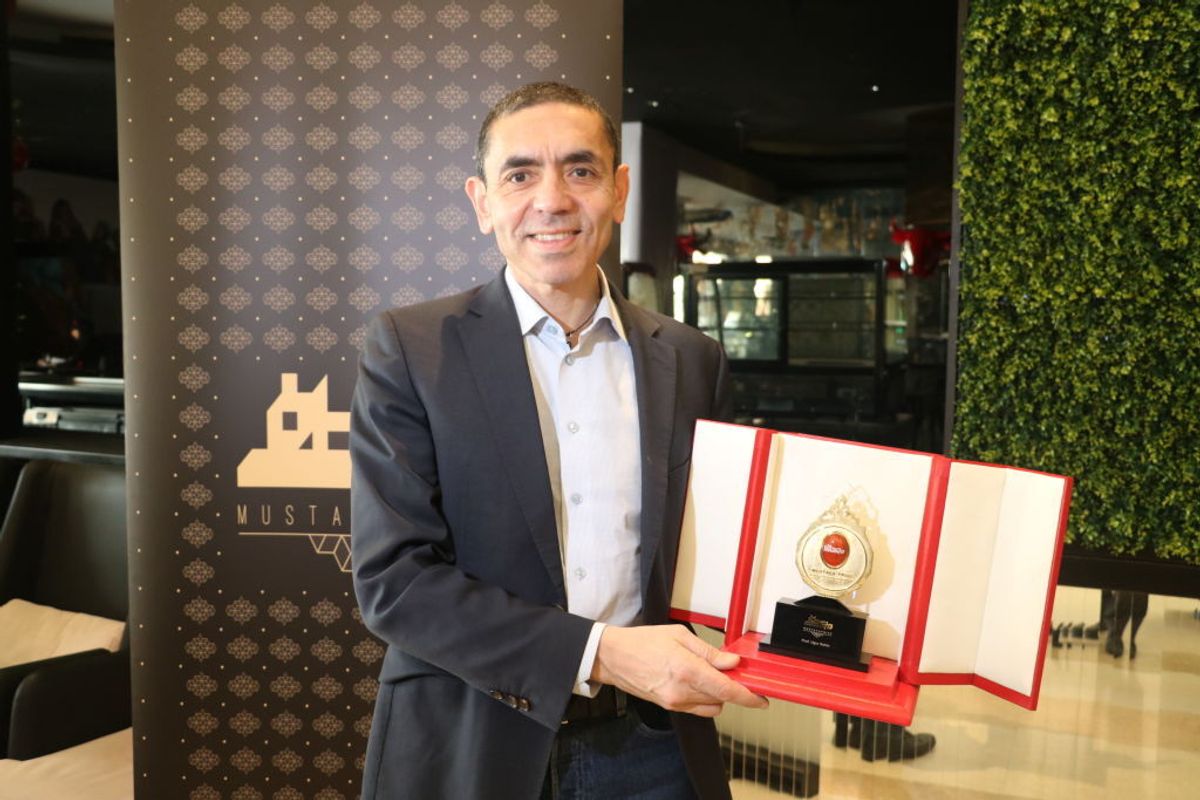 In late 2020, three major pharmaceutical companies announced promising results in early trials of their COVID-19 vaccine candidates, prompting widespread optimism about the availability of a safe and effective vaccine for the virus, perhaps even before the end of the year.

On Dec. 2, 2020, the U.K. government gave emergency authorization for the distribution and application of the vaccine created by Pfizer and a smaller German company called BioNTech. The distribution was scheduled to start during the week of Dec. 7.

BioNTech was founded by Ugur Sahin and Özlem Türeci, two immunologists and cancer researchers who also happen to be a married couple. Their striking personal story became the focus of news coverage in late 2020, and their achievements were described by some as an "immigrant success story" — Sahin was born in Turkey and immigrated to German with his family at the age of 4, while Türeci was born in Germany to a Turkish immigrant father.

In November and December 2020, social media users enthusiastically shared an old photograph of what they said was Sahin's family, claiming that "the boy in the yellow t-shirt" would later go on to lead the team that created the Pfizer/BioNTech COVID-19 vaccine: In one instance, another user claimed the photograph showed a family of Romanian immigrants.

These widely shared posts were misleading. Sahin and his family did immigrate to Germany from Turkey when he was a young child. But Sahin's family is not shown in the photograph in question, and Sahin is not the boy in the yellow T-shirt. The widely shared tweet that referred to a Romanian family in Germany was entirely inaccurate.

As originally reported by the Turkish fact-checking website Teyit, the picture in question was taken by the German photographer Candida Höfer. It was featured in a 2016 collection of Höfer's photographs, entitled "Türken in Deutschland" ("Turks in Germany"). Another of Höfer's photographs shows just the mother and father from the family in question: In August 2020, DiasporaTürk — an online community dedicated to collecting stories and material relating to Turkish emigrés in Europe in the second half of the 20th century — profiled the family featured in Höfer's photographs. The photograph of the family (including the children) was dated to 1975 and apparently taken in Düsseldorf.

According to DiasporaTürk, one of the grandsons of the couple from the photograph contacted them and filled in the blanks about the family's story, explaining that the father had moved to Germany from Aksaray, Turkey, in 1965, and the rest of the family joined him later. In 1975 they moved to Düsseldorf, and the photograph in question was taken within a week of their moving into their new home. Rather than becoming a cancer researcher, the boy in the yellow T-shirt became a lathe setter.

The date of the photograph makes any purported connection to Sahin somewhat implausible. We have not yet been able to independently verify Sahin's precise date of birth (Wikipedia states variously he was born on Sept. 19 or Sept. 29, 1965) but an August 2016 news article gave his age as 50, and The New York Times reported in November 2020 that he was 55 years old.

As such, Sahin would have been either 9 or 10 years old in 1975, when Höfer's photograph of a Turkish family in Düsseldorf was taken. It's possible the boy in the yellow shirt was that old, at that time, but it's unlikely.

Furthermore, as Teyit correctly pointed out, The New York Times noted in its profile of Sahin and Türeci that Sahin had left the city of Iskenderun, Turkey, whereas the family from the photograph emigrated from Aksaray, some 170 miles away.

Some social media posts and online articles including the photograph of the family described them specifically as Turkish Muslim immigrants. We have not yet been able to determine Sahin's person religious convictions, if any, so this element of the narrative surrounding both the photograph, and Sahin's personal background, remains unclear. In November 2019, Sahin was the recipient of a Mustafa Prize, an Iranian-administered award for scientists in the Islamic world.

Eligible nominees must either be professed Muslims from anywhere in the world, or scientists of any religious persuasion from one of 57 Muslim-majority nations (including Sahin's native Turkey). As a result, Sahin's personal religious convictions cannot be deduced from his winning a Mustafa prize in 2019.

Although the family shown in the photograph is not Sahin's, and the boy in the yellow shirt is not him, the milieu it depicted may well have been similar to the one in which Sahin grew up. According to multiple reports, Sahin's father — like the father of the "boy in the yellow t-shirt" — immigrated to Germany as a gastarbeiter ("guest worker") in a Ford factory in Cologne. Both men originally arrived by themselves, before their respective families later joined them.

The purpose of the guest-worker programs was to bring an influx of skilled labor into Germany in order to revive the German economy in the 1960s and 1970s. Workers were originally intended to stay for only two years, before returning to their countries of origin, but the rules were later changed and allowed for family reunification in Germany.

So in the case of Sahin and the boy in the yellow shirt, their families' journey in German society began under the same legal mechanisms, and in similarly modest circumstances.