Did Pentagon Confirm Leaked Pics of UFOs Were Taken by Military Personnel?

The Pentagon has gone on the record to confirm triangular objects over a Navy destroyer were filmed by U.S. military personnel. 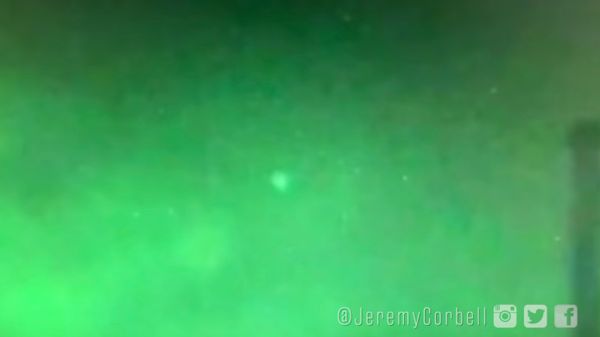 Claim:
The Pentagon confirmed photographs and videos of UFOs were taken by U.S. military personnel.
Rating:

The U.S. Department of Defense (DOD) has confirmed that a widely seen, night-vision video showing unidentified, pyramid-shaped flying objects filmed by military personnel aboard the the Navy destroyer USS Russell in July 2019 is authentic.

Snopes verified the rumor with the Pentagon after readers asked us to verify social media posts that were reporting the same.

Sue Gough, spokeswoman for the DOD, said in an email to Snopes, "I can confirm that the video was taken by Navy personnel. I have nothing further for you on it."

In popular culture, UFOs are associated with extraterrestrials. But Jeremy Corbell, the documentary filmmaker who obtained the video, is careful to note that according to his reporting on the subject, their origin and nature are currently unknown to U.S. military officials.

The videos showing what appear to be three pyramid-shaped objects were first included in a classified briefing, but the images themselves aren't classified. They were obtained by Corbell and Las Vegas-based news station KLAS'TV's chief investigative reporter George Knapp. They were first reported by KLAS's unexplained phenomena project Mystery Wire, which is run by Knapp.

The objects can be seen in Corbell's YouTube video below:

The objects, according to Mystery Wire, were hovering about 700 feet over the Navy ship, off the coast of San Diego.

In a statement sent to Snopes by text message, Corbell said:

I hope these materials can represent a unique moment in modern history, a possible turning point, to allow us to investigate and explore the mystery of UFOs in a rational and transparent way - free of stigma or ridicule. What we are observing in the UFO phenomena requires close inspection - as it certainly represents technology far beyond what the US or any technologically developed nation, currently has within their military arsenal.

Gough also confirmed in a statement sent to Fox News that three other photographs of unidentified airborne objects were taken by military aviators. The photographs were taken during flights off the East Coast in 2019.

The photographs included in the tweet above were taken on an iPhone by an F-18 fighter jet weapons systems officer, seated behind the pilot on March 4, 2019, according to Mystery Wire.

"I can confirm that the referenced photos and videos were taken by Navy personnel," Gough told Fox News. "The UAPTF [Unidentified Aerial Phenomena Task Force] has included these incidents in their ongoing examinations."

In August 2020, the Department of Defense established the Unidentified Aerial Phenomena Task Force to investigate events like these. Defense and intelligence officials are expected to present U.S. senators on intelligence and armed services committees with a report detailing what is known about UFO sightings and an analysis as to whether UFOs pose a threat.

Some observers stated that they believe the phenomena can be explained by light distortions from a camera lens, a plane, or drones deployed by adversary countries.

We reached out to the National Oceanic and Atmospheric Administration (NOAA) to ask whether any weather events in the areas of the phenomena could possibly explain any of them, and we will update this story if we hear back.

Knapp reported in an April 6 article posted on Mystery Wire that the objects, encountered on both coasts by military personnel, have continued to baffle military and intelligence officials: "Many of the objects have been referred to as drones, but that is not what Pentagon investigators have been telling the chain of command behind the scenes."

The photographs and videos obtained by Corbell were included in a series of classified briefings in May 2020 by the Office of Naval Intelligence.

"Whatever they are, they don’t know, but they’re not ours. That was in the classified briefing," Corbell, who made the documentary, "Bob Lazar: Area 51 & Flying Saucers," told Snopes in a phone interview.

The release of the images represented the second time in recent history that the Pentagon confirmed that images of unidentified airborne objects were real and were taken by military personnel.

In April 2020, the Department of Defense unclassified three videos of UFOs taken by Navy aviators in 2004 and 2015. One of those aviators, Lt. Commander Chad Underwood, spoke to Corbell in a February 2021 podcast. Underwood said that the object he saw from the cockpit of an F/A-18 Super Hornet in 2004 had no features of any known aircraft — in fact, he said:

"It's featureless. It's just this elongated thing. There's no distinguishing feature that says, 'This is an aircraft.' I have no idea what this thing is."

U.S. senators Mark Warner and Marco Rubio, the chair and vice chair of the U.S. Senate Select Committee on Intelligence respectively, both commented on the phenomena in general terms in interviews with Mystery Wire. Warner stated, in part, "It's probably a foreign power," and added that the U.S. military has changed its footing and now encourages pilots to report phenomena whereas before doing so had been stigmatized.

Well I'll comment on what's been in the public domain and what's been discussed publicly in a number of places. The bottom line is that we’ve had now consistent reports of objects flying over military installations and military training areas, And it’s not the U.S. government. And so anytime I see things flying over our military installations that are not ours, we need to know who they are. We need to know why they’re there. And that’s the way I focus on it.

Other people want to speculate about other things that are more exciting, UFOs, aliens, and all this sort of thing. And, you know, we just don’t know what it is. I think at a very basic level, if there are things flying over our military installations, or if there’s things flying over the skies of the United States, and we don’t know what they are, or where they came from, we need to have answers to it. And we need to be working on getting an answer to it.

The events detailed above are both high-profile and extraordinary because the U.S. military has publicly confirmed that the images and videos are authentic and were taken by military personnel during sightings and encounters with UFOs. But UFO sightings by both military and members of the public are hardly new.

There was a marked spike during the COVID-19 pandemic, with travel limited and more people stuck in their homes, The New York Times reported. However, an uptick in sightings didn't necessarily equate to an increase in objects that were truly unidentified:

Only a small fraction of reports scrutinized by NUFORC [National UFO Reporting Center], which is based in Washington State, are truly not identifiable. That proportion has not changed even as more calls have poured in, according to the director.

Ufologists are frequently prickly when it comes to the subject of apparent increases in U.F.O. sightings, warning that bumps occur with regularity over the years, and are a favorite subject of news reports. The coverage itself may also drive up so-called sightings, they warn.

A recent example of a civilian encounter with such an object that hit the news occurred in February 2021. The flight crew of an American Airlines passenger jet saw an object they couldn't explain over New Mexico. "We just had something go right over the top of us – I hate to say this but it looked like a long cylindrical object that almost looked like a cruise missile type of thing – moving really fast, it went right over the top of us," the pilot said over the radio.

Updated to include further context about UFO sightings contained in an April 9, 2021, New York Times report.

Updated with comments given in interviews with Mystery Wire by U.S. senators Mark Warner and Marco Rubio, chair and vice chair of U.S. Senate Intelligence.