A photograph supposedly showing 5,000 UCLA students holding "a candlelight vigil for fallen ISIS soldiers" depicts nothing of the sort. 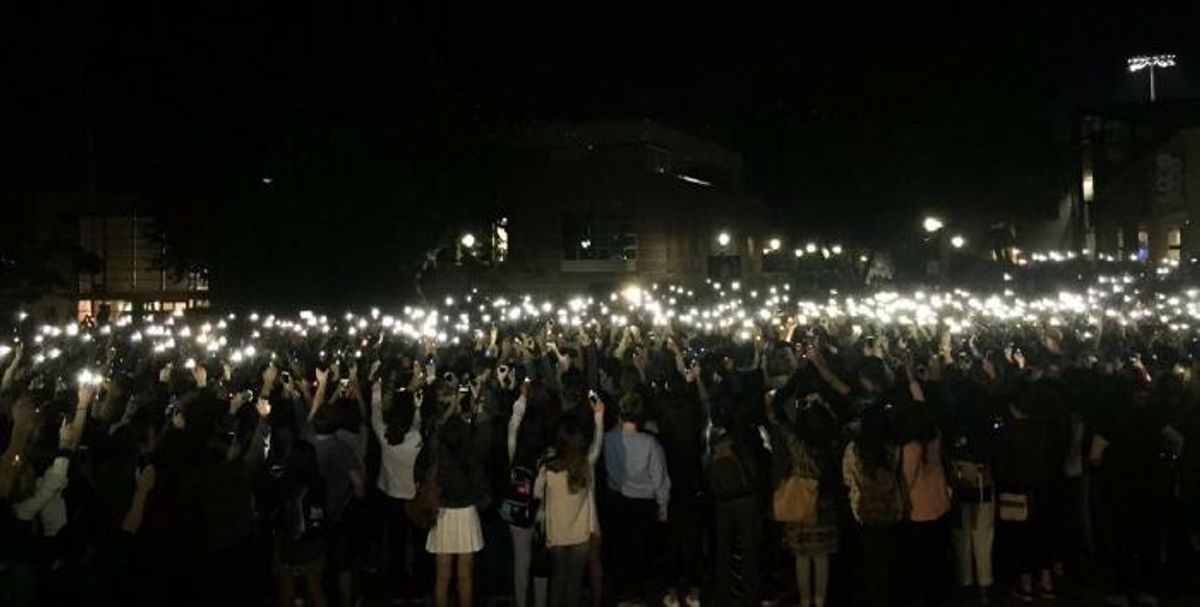 On 4 June 2016, the web site Someone's Bones published an article with accompanying photograph reporting that several thousand UCLA students had held a candlelight vigil on campus to honor "fallen ISIS soldiers whose lives were cut short by drone strikes or machine gun fire in Syria and Iraq":

On Thursday, over 5,000 UCLA students held a candlelight vigil for fallen ISIS soldiers whose lives were cut short by drone strikes or machine gun fire in Syria and Iraq. Humanities professor Thomas T. Turnbolt organized the nighttime vigil; he had found solidarity with ISIS combatants during a year-long sojourn to Syria, where he witnessed the harsh and inhumane conditions under which ISIS soldiers operate. Turnbolt rejected the word “terrorist,” preferring the word “freedom fighters” to describe his heavily-armed, bomb wielding comrades.klug-vigil-armsup_mid

Professor Turnbolt distributed flyers and hung posters across southern California’s largest campus, encouraging students to abandon preconceived hatred and instead adopt tolerance and understanding under the banner of cultural diversity. The ISIS vigil was so successful it even attracted supporters from other California schools.

No such rally or vigil in support of ISIS took place at UCLA, however. This report originated with (and was published by no one other than) Someone's Bones, one of many fake news sites that shamelessly post fabricated stories with outrage-provoking clickbait headlines in order to lure gullible readers into generating advertising revenue for them.

In fact, the photograph seen above actually depicts a candlelight ceremony held to honor the memory of UCLA professor William Klug, who had been shot and killed on campus by a disgruntled former student the day before:

The UCLA campus community filled Bruin Plaza to share messages of solidarity and healing in a candlelight ceremony honoring the memory of professor William Klug, who was shot and killed in his office a day earlier.

Students and members of the public listened to speakers and circled a growing memorial of flowers and hand-written messages placed at the Bruin statue. The crowd thronged into the plaza shortly after sunset and lined the second and third-floor walkways of the Wooden Center. The “Bruin Strong” vigil was organized by the Undergraduate Students Association Council and the Graduate Student Association. Professor Klug was a beloved member of the mechanical and aerospace engineering faculty.

“Let us illuminate the night with the unity and strength and perseverance of our Bruin family,” said Danny Siegel, student body president and third year political science major. “This is not an event we will quickly get over. It will take time to heal the sadness that has cloaked our campus, but we will heal it together. Let there always be light.”

The evening's messages were of gratitude and commendation for the first responders, and love and solidarity as the campus grieves and come to grips with the murder of a popular and promising young professor. Klug is survived by his wife and two children aged seven and nine.