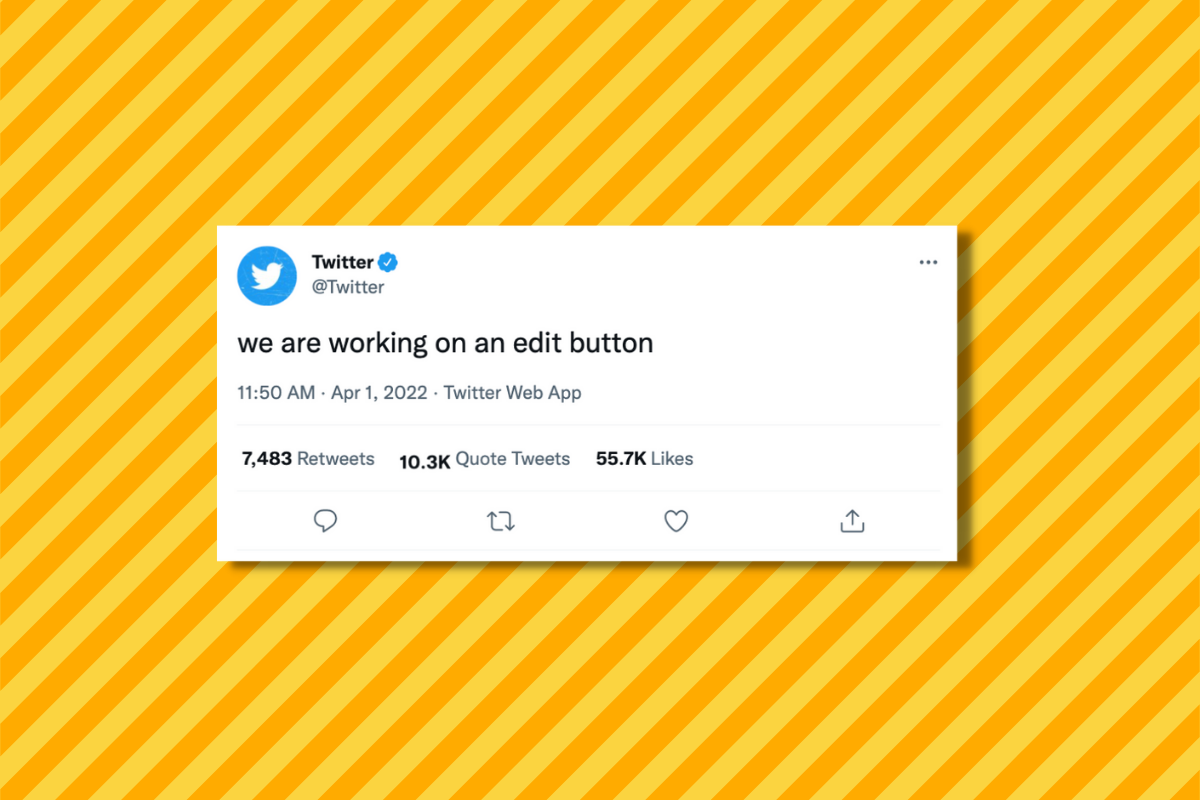 Claim:
Twitter officially announced the platform would be rolling out an edit button.
Rating:

On April 1, 2022, the official account of Twitter tweeted that it had been working on an "edit" button in what many users thought was an April Fools' Day prank. Four days later, the platform announced that it had, indeed, been working on an edit feature since 2021 and planned to kick off testing in 2022. However, the platform did not formally announce when — or if — that feature would rolled out to all users.

On April 1, 2022, Twitter’s verified account posted to the social media platform that it was “working on an edit button.”

A quick look at the date led our team to believe that this was, in fact, an April Fools' Day prank. So, we reached out to the social media platform directly. In an emailed statement to Snopes, a spokesperson wrote: “We cannot confirm or deny but we may edit our statement later.”

As of this writing, the tweet had been liked more than 53,000 times.

But our hunch was incorrect. On April 5, the social media platform revealed that it had been working on an edit feature since 2021. According to a Tweet shared by the verified Twitter Comms account, the platform is kicking off testing in 2022 to "learn what works, what doesn't, and what's possible."

The announcement was made after Tesla CEO Elon Musk hinted at the possibility of an edit button after he was named Twitter's biggest stakeholder and was appointed to the platform's board of directions.

However, whether that testing will result in a fully functional edit button for all users remains to be seen.

While we can now definitively say that Twitter is testing the feature, it's still fun to take a look back at the many social media users who highlighted the coincidental date of the original "edit" post:

Another reminded the platform of its history of sassy posts about edit buttons:

And a previous notion of implementing a dislike option:

Until the test of time tells us whether Twitter does, in fact, roll out an “edit” option — or edit the previous tweet on the edit option — we’ve rated this claim as “Research in Progress.” (Even though we’re pretty sure it’s a joke.) We'll edit, er update, the article accordingly.

Update [April 5, 2022]: The rating was updated from "Research in Progress" to "Mixture" after Twitter revealed it had been testing an edit feature since 2021.