The orange "Twin Cities Police Easily Startled" traffic sign depicts a police officer jumping in the air and discharging a gun with each hand. 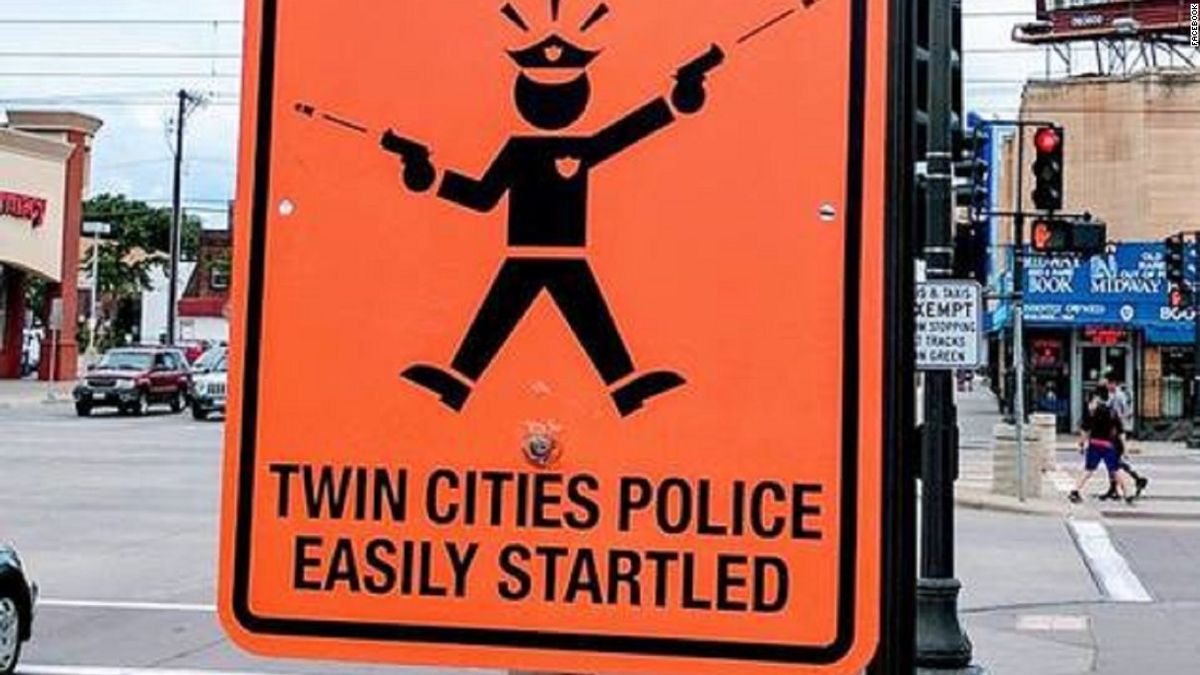 Social media users began circulating photographs of orange street signs criticizing “easily startled” Twin Cities police in April 2021, as former police officer Derek Chauvin was on trial in Minneapolis for the in-custody death of George Floyd, and residents of nearby Brooklyn Center, Minnesota, were protesting the police shooting of 20-year-old Daunte Wright during a traffic stop.

The orange lookalike traffic signs were headed "WARNING," and featured an image of a police officer jumping in the air and discharging a gun in each hand, above a legend reading “TWIN CITIES POLICE EASILY STARTLED": However, the pictured "Twin Cities Police Easily Startled" sign was not an official traffic sign, nor was it posted in 2021. A few such signs were installed in St. Paul and Minneapolis, but that activity was furtively undertaken by unknown persons and took place in July 2017, not in 2021.

Back in June 2017, Minneapolis had again become a site of controversy when a police officer there shot and killed Justine Damond after Damond had called 911 to report what she believed to be a sexual assault happening in an alley near her home. That incident came less than a year after Philando Castile was shot and killed by police during a traffic stop in St. Anthony, Minnesota.

According to CNN's contemporaneous reporting on the rogue street signs, they were removed shortly after being installed in July 2017:

St. Paul Police Department spokesman Steve Linders confirmed there was at least one sign in St. Paul and another in Minneapolis. Linders didn’t comment on any reaction from officers to the signs.

“We are aware of the signs and Minneapolis Public Works is removing them,” Minneapolis Police Department spokeswoman Sgt. Catherine Michal said. “We have no further comment at this time.”

Addy Free spotted the St. Paul sign at a busy intersection on his way home from work ... The next morning, when Free went by the place where the sign had been, it was gone. The sign was taken down because it was attached to a legitimate street sign, Linders said, but he was unsure if the incident was being investigated as vandalism.

Free said the sign appeared to be made of metal and that it had the same thickness as the real street sign above it.