Myriad studies have suggested that turmeric can treat or prevent dementia, but evidence of its efficacy is problematic. 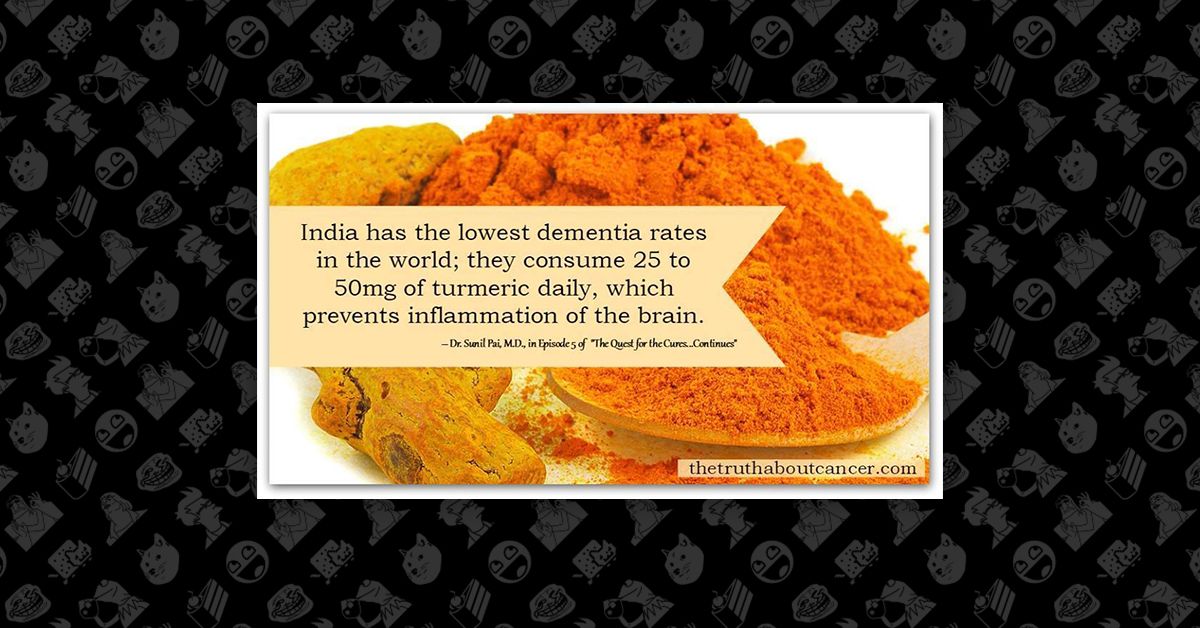 Claim:
Turmeric can prevent dementia; as a result, India, whose food contains a large amount of the spice, has the lowest rates of dementia worldwide.
Rating:

Turmeric, which has been the subject of thousands of studies and perhaps even more memes, came up again recently when an image circulated claiming that the spice prevents dementia, and that because of its curative powers, India has the lowest rate of dementia in the world. The meme, like a lot of claims about turmeric's curative properties, relies on a large body of research that scientists have recently called into question.

Most turmeric studies have focused on curcumin, which appears in high concentrations in the root, and other similar chemicals called curcuminoids. Many of these curcumin studies employ a laboratory technique called High Throughput Screening (HTS) that allows researchers to test how curcumin responds to chemicals representing different bodily functions.

These types of studies have suggested that curcumin can treat conditions ranging from diabetes to HIV. One study summed up the findings in this astonishing list:

An expansive 2017 review of curcumin and curcmuninoid research, however, argued that curcumin's chemical properties make it impossible to study using HTS and too biologically unstable to treat anything.

Curcumin is part of a group of chemicals called pan-assay interference compounds (or PAINS) that are known to trigger false positives in HTS studies.

Even if false positives weren't a problem, curcumin and curcuminoids are both unstable and not very potent in the human body, making them unlikely to be effective as a treatment.

Speaking to the Washington Post, Kathryn M. Nelson, a principal scientist at the University of Minnesota’s Institute for Therapeutics Discovery and Development and the author of the 2017 review of curcumin explained:

Curcumin’s bioavailability — the amount that makes its way throughout the body — is “dismal,” Nelson says. The chemical is fragile, and once it’s ingested, it’s quickly excreted. “The compound itself is probably not doing anything,” she adds. “It falls apart in water. Think about how well it’s going to survive your stomach” and its acids.

For these and other reasons, research on the benefits of turmeric and curcumin remain far from settled, despite the large amount of literature on the topic.

Does India Actually Have The Lowest Rage of Dementia in the World?

Web sites promoting the use of turmeric often claim that India, a country with relatively high turmeric consumption, has the lowest rate of dementia in the world. But the research on dementia rates in India is so limited that it makes using the country as proof of turmeric’s efficacy problematic, if not scientifically dishonest.

The claim originated with a 2001 epidemiology study that suggested one rural Indian village boasted the lowest rates of Alzheimer's (the most common dementia subtype) in the world. This finding, however, came with heavy caveats:

These are the first AD [Alzheimer's disease] incidence rates to be reported from the Indian subcontinent, and they appear to be among the lowest ever reported. However, the relatively short duration of follow-up, cultural factors, and other potential confounders suggest caution in interpreting this finding.

Later studies on dementia rates in India were hindered by the similar problems.

A 2006 study in the journal The Lancet suggested that the existing epidemiological data was insufficient to estimate the actual prevalence of dementia in India, in part due to under-diagnosis and a lack of awareness about the disease in rural communities. Based in part on an increasing awareness of the condition in rural parts of India, scientists predict dementia rates to grow by 300% in the coming years, among the fastest in the world. A 2008 paper further supported the notion that economic factors can contribute to an underestimate of the incidence of dementia in lower-income countries like India.

Relying on disease rates in populations that consume a lot of turmeric as evidence for its efficacy is also problematic without data on other dietary factors and genetic differences, as a 2017 review suggested:

Even the authors of the oft-cited study cautioned against overinterpretation of their results given the relatively short duration of the study, the small number of incident cases, and the wide confidence intervals. Diet was not considered as part of the study, and the frequency of the APOE4 allele [gene], a risk factor for AD, was noted as being lower in the [Indian] group as compared to the [American] group.

How Would Turmeric Treat Dementia?

Setting aside for a moment the problems with calculating the rate of dementia in India and the problems with HTS studies of curcumin, how would curcumin cure dementia? There are two main theories. The first relies on its (contested) anti-inflammatory properties:

Research to date suggests that chronic inflammation, oxidative stress, and most chronic diseases are closely linked, and the antioxidant properties of curcumin can play a key role in the prevention and treatment of chronic inflammatory diseases.

However, there have been no controlled, double-blind, clinical trials on humans that support this claim outside of the lab. In terms of clinical research on humans, a 2012 phase II, 24-week, randomized, double-blinded clinical trial of curcumin on 36 individuals with mild to moderate Alzheimer’s indicated a lack of efficacy:

After 24 weeks of treatment, there was no observed difference in mental status between the placebo and treated groups based on several measurements of cognitive status.

"To our knowledge, [curcumin] has never been shown to be conclusively effective in a randomized, placebo-controlled clinical trial for any indication," Nelson and her colleagues wrote in their 2017 review.

Baell, Jonathan B., and Holloway, Georgina, A.   "New Substructure Filters for Removal of Pan Assay Interference Compounds (PAINS) from Screening Libraries and for Their Exclusion in Bioassays."     Journal of Medicinal Chemistry.   4 February 2010.