Did Turkish Football Fans Chant Putin 'Looks Like a Dick'?

This wasn't the first time anti-Putin chants rained down from the rafters. 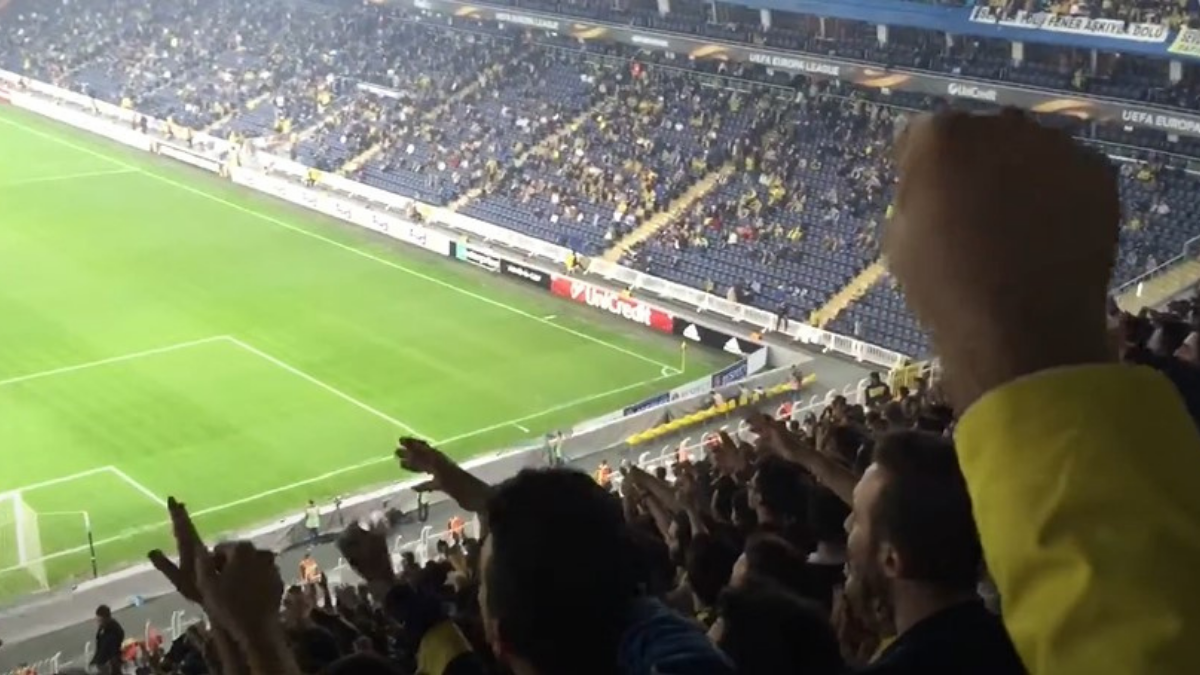 This is a genuine video. However, it was filmed in 2016, not during Russia's invasion of Ukraine in February 2022, as some have claimed.

In February 2022, as Russian President Vladimir Putin launched a military invasion of Ukraine, a video went viral on social media that supposedly showed a stadium full of Turkish football fans engaged in an anti-Putin chant. According to this video's captions, they specifically chanted: "He looks like a dick, sinister face, son of a bitch, Vladimir Putin."

This is a genuine video of football fans engaged in an anti-Putin chant. However, this video was filmed in 2016 and is not related to the 2022 invasion of Ukraine.

The translated captions in this video also appear to be generally accurate. When this video was posted to YouTube by Emre Eroglu, a Turkish football fan, they provided the following transcription: "Yarrağa benziyor, Meymenetsiz tipi, Orospu çocuğu, Vladimir Putin." This translates (via Google) to "looks like a dick, the ungodly type, son of a bitch, Vladimir Putin."

The earliest version of this video that we've been able to find was posted in May 2016 when it was shared on YouTube by "Snapchat Fenerbahce Günlugu," an account that seemingly reshared Snapchat videos originally posted by a fan club of the Turkish football team Fenerbahçe S.K.

While we can't say for certain, it appears that this video was originally posted on Snapchat by Genç Fenerbahçeliler, a large fan club of Fenerbahçe S.K. that has dozens of similar videos in the same stadium. We reached out to Genç Fenerbahçeliler for more information and we will update this article accordingly.

Judging by the centerfield logo, stadium banners, and the general information we have been able to glean about the timeframe, it appears that this video was taken on Feb 15, 2016, at the Şükrü Saracoğlu Stadium in Istanbul, as Fenerbahce played Locomotiv Moscow during the first leg of the Europa League round.

This match, which Fenerbache won 2-0, took place during high tensions between Russian and Turkish fans. A few weeks earlier, a Russian attack aircraft had been shot down by a Turkish fighter jet after, according to Turkish officials, it entered the country's airspace near the border of Syria and Turkey. Lokomotiv Moscow midfielder Dmitry Tarasov also taunted Turkish fans by wearing a pro-Putin T-shirt, a decision that resulted in sanctions for his team from the UEFA. The BBC reported:

The politically-charged Europa League match was the biggest sporting encounter between the nations since Turkey shot down a Russian jet in November.

Lokomotiv Moscow called Tarasov's behaviour "unacceptable" in a statement on its website (in Russian).

The club itself is to be sanctioned by European football's governing body Uefa because players are not allowed to show political statements at matches, the organisation said.

This isn't the first time that a stadium of fans have serenaded Putin with insults. In 2014, during the annexation of Crimea by the Russian Federation, the phrase "Putin khuylo," or Putin is a dickhead, became a common slogan among anti-Putin football fans.

The BBC reported that several Belarusians were arrested at a Euro 16 qualifier match after joining Ukraininans in an anti-Putin song.

While the above-displayed viral video of Turkish football fans engaged in an anti-Putin chant is several years old, a different sports team truly did engage in an anti-Putin chant in response to Russia's Feb. 2022 invasion of Ukraine. Jonas Miklovas, a reporter for Basketnews, a website that covers Euroleague, posted a video showing fans of the Lithuanian team Žalgiris Kaunas chanting "Putin Khuylo" and "Glory to Ukraine."

“Basketball and War: What Sanctions Were Imposed for Clubs and Countries in the Past?” Basketnews.Com, https://basketnews.com/news-166787-basketball-and-war-what-sanctions-were-imposed-for-clubs-and-countries-in-the-past.html. Accessed 25 Feb. 2022.

Tomkiw, Lydia. “What Is A Fencer Su-24? What To Know About The Russian Plane Shot Down By Turkey.” International Business Times, 24 Nov. 2015, https://www.ibtimes.com/what-fencer-su-24-what-know-about-russian-plane-shot-down-turkey-2197848.